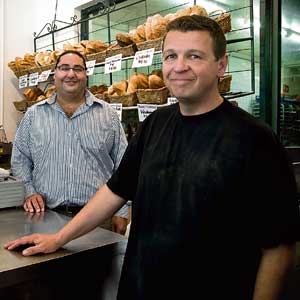 COMMITMENT: Greg Sommer (right) and Steven Aris believe there are opportunities to rapidly grow their business, but don’t want to compromise on quality. Photos: Grant Currall

THE head chef at the Rydges CBD Restaurant Bar tasted some of the bread.

And so Barrett's Bread signed up another wholesale customer.

To the general public, Barrett's is best known for its bakery in Nedlands, which has a strong following from its upmarket clientele. Astute customers may also realise the same owner runs the store two doors down, called Ned's Cafe, which has a funkier feel about it, targeting the younger business and university crowd.

But sitting behind both of the noticeably well-attended establishments - with lines out the door by late morning - is a wholesale business, which turns an even better profit.

Barrett's Bread owner Greg Sommer set up the purpose-built factory in Welshpool in 2007 to produce breads and patisseries for the bakery, cafe, and wholesale to restaurants and supermarkets.

"For the first 12 months it was a drain financially," Mr Sommer says. "Now the wholesale business is bigger than the retail one."

Margins are kept in-house, as is the quality control of all food.

Mr Sommer bought the Nedlands bakery about seven years ago, after deciding to move from Bunbury, where he had a cheesecake shop.

"I just knew there was something special about it. I made the decision in about two minutes," the trained chef says.

"We did momentarily think about changing the name, but the previous owner was quite a renowned baker. Why would you change it? There was so much goodwill there."

Two years later, a hardware store two doors down the road came on the market. Mr Sommer took the opportunity to expand his business, and considered using the Barrett's name to brand the new enterprise.

Ultimately, however, he took a very different approach.

"At the end of the day we wanted two separate businesses to compete against each other," Mr Sommer says. "Ned's is a business in its own right and it has to be run that way."

So much so that the bakery and cafe even serve different brands of coffee.

In 2007, Mr Sommer set up the Welshpool factory and in 2008 he hired a sales rep to grow the wholesale business, which he says is a rare appointment to make in his line of work.

"When a business becomes a culture you know it's a good business," Mr Aris told Gusto.

Mr Aris says while restaurants have tended to avoid switching suppliers during the financial downturn, there are signs confidence is returning.

Messrs Sommer and Aris believe there are ample opportunities to open up another couple of cafes or bakeries that would produce a short-term windfall, but both agree rapid expansion would not be in the best interest of the business.

"We don't want a massive increase in the next six months," Mr Sommer says. "We could make a lot of money but the quality drops."

Mr Sommer nominates staffing as the major challenge of the business, which is usual in cafe circles that tend to have a transient workforce. On the flip side, Mr Sommer says bakers he's sponsored on the 457-visa program have worked out really well.

Mr Sommer is a chef who changed career paths to avoid working weekends. He now gets to work at 4am - out of habit - to lend a hand to his workers, and spends the afternoons finishing off his MBA, which is about six weeks from completion.

"I know my wife would like me to work more during business hours," Mr Sommer says.

- Jonathan Barrett has no financial interest in Barrett's Bread