The best brews in Shafto Lane

Brewing major Lion Nathan has teamed up with industry stalwart Danny Kapinkoff and his son, Robert, in a microbrewery venture. Adam Orlando reports. 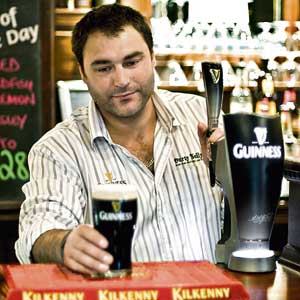 CRAFT brewing has been a part of Western Australia's pub scene for more than two decades, with plenty of microbreweries having tried to find a niche space in the competitive marketplace during that time.

Amid those that have fallen by the wayside are others that have made their mark, chipping away at the dominance of Lion Nathan and Foster's to the point where the majors have preferred to buy out the small brewers rather than compete for business.

Enter Danny Kapinkoff. In the business for more than 30 years, he has owned and operated a number of taverns and pubs, including Narembeen Hotel, Merredin Oasis Hotel, Girrawheen Hotel, the Moon & Sixpence in Woodvale and, for the past 12 years, Durty Nelly's in Perth.

Mr Kapinkoff and his son, Robert, have turned their part of Shafto Lane off Murray Street into a bustling city nightspot, a viable alternative for the CBD crowd looking for a drink after the working day is done.

Now, Durty Nelly's will put its name to a microbrewery in a partnership with brewing giant Lion Nathan.

The pub began building the microbrewery in mid-2008 and expects to secure a liquor licence in the coming months.

A media shy Robert Kapinkoff said his father's reputation in the industry led Lion Nathan to approach the pub to establish a microbrewery.

"We had the site there next door and we were looking to do our own beers; Lion Nathan approached us because they were looking for somewhere to put a microbrewery and we had what they thought was a good site," Mr Kapinkoff told Gusto.

"My father's been in the industry for over 30 years in pubs, they've [Lion Nathan] known him for a while and they were looking for the right pub and this obviously appealed to them.

"Basically, we look after the brewery and those beers will just be exclusive to us, we won't sell them anywhere else in Perth and it will go from the vat to the tap."

Under the deal, Durty Nelly's will sell both James Squire and Lion Nathan beers, as well as a mid-strength ale and a wheat beer, which are yet be named.

Mr Kapinkoff hopes a microbrewery in the heart of the city will attract people to the west end of Perth.

"This will do great things for the place. The thing about Durty Nelly's is that it's hidden [from view], so as soon as the brewery goes up it will bring people down the lane," he said.

"People seem to be looking after their money a little bit more and are a little afraid to spend a few dollars at the moment.

"Luckily we haven't had to downsize; we've still got enough staff to make sure we're looking after the customers, we're still going well, but it has dropped off a little.

"Unlike some of the other places around town, we don't get a lot of the business lunches, we get the workers in the office, we don't get the bosses, so they're the ones that have a drink and enjoy themselves.

"They're the ones we hope the microbrewery will attract back to the place."

The pub itself was designed and built in Ireland and shipped over in sea containers to ensure its Irish authenticity, even though the owners are Macedonian.