The Heritage finds its time

The new hospitality venues at Brookfield Place have become a CBD drawcard, but some have needed to refine their offering during their first year of trade. 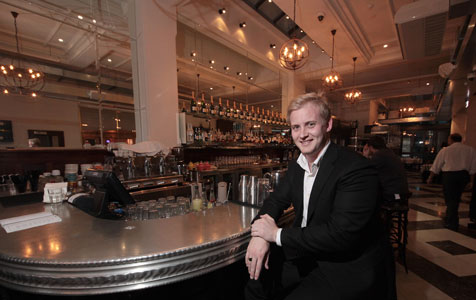 The opening last year of more than half a dozen restaurants, cafes and bars in the restored heritage buildings at Brookfield Place was a landmark period in Perth’s development as a city.

Their popularity was immediate, and together they bolstered the popularity of the precinct; it meant St Georges Terrace, which for decades had been desolate in the evenings, was suddenly a popular place to be.

“It was crazy in the nicest possible way,” recalls The Heritage Brasserie, Bar and Boardroom general manager Edward Wolkowinski.

The Heritage and The Trustee Bar & Bistro next door were the first venues to open, in May last year.

“The first three to four months were madness,” Mr Wolkowinski added. “We had queues out the door, it was very hectic.”

The big crowds, combined with large numbers of new staff at a new venue, made it a challenging period.

Since then, business has picked up again, though not to last year’s frenetic level.

He says the dinner trade has been consistently strong, as expected, while the lunch trade and bookings in the private dining room (the boardroom), which have been busier than anticipated, have been a pleasant surprise.

The one area that didn’t work out was the offering of full-service cooked breakfasts.

The Heritage dropped its breakfast trade in March; Mr Wolkowinski says he would love to try breakfast again but for now acknowledges that Perth’s city workers simply want the ‘grab and go’ option.

Other venues in Brookfield Place have also refined their offering, with Print Hall – an ambitious venture comprising multiple venues over four levels – no longer trading on Sundays.

Overall, Mr Wolkowinski is pleased with how his business has fared, both during the week and on Saturdays, when it attracts a different clientele from the weekday city workers.

“You get groups of people who come into the city to see the new bars and restaurants,” Mr Wolkowinski says.

He believes The Heritage has benefited from the cluster of venues at Brookfield Place, with Bar Lafayette another addition, along with nearby venues such as Sentinel and Greenhouse.

Another plus is the gradual opening of new retail outlets at Brookfield Place, with luxury European brand Montblanc due to open in coming weeks.

He believes the whole package is needed if the city is to compete with Crown, which he has no hesitation in naming as the major competition.

Like many restaurateurs and publicans, Mr Wolkowinski would like more licensing flexibility, and is currently looking at the possibility of applying for a 2am closing licence for Bobeche, his small bar downstairs from the Heritage.

One of the challenges facing The Heritage and its neighbouring businesses is ensuring the heritage buildings that house them are functional and efficient.

Mr Wolkowinski admits to some teething issues with the old Royal Insurance building, but looking up at the tall ceilings and rubbing his hand on the jarrah fittings, he has no doubt the location is a huge asset for his business.

“I would forgo a purpose-built building for a heritage site like this any day,” he says.