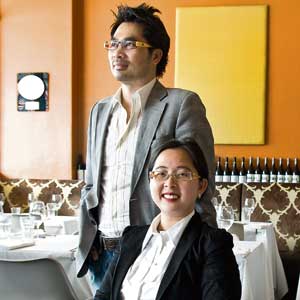 WHEN Mai Nguyen was 11 and working in her mother's Vietnamese restaurant, she never dreamed that, one day, she would be standing in the very same location as the co-owner of a multi-award winning, highly regarded fine-dining Thai restaurant.

But Mai admits it's funny how life works out sometimes.

"My mother never wanted me to go into this business but it happened to be that way because of life, and that's just how it is," Mai told Gusto.

Mai and her parents came to Australia on Valentine's Day in 1982 as refugees fleeing post-war Vietnam. Out of necessity, her mother established Dakao, the simple Vietnamese she operated in Bulwer Street, Perth, for 21 years.

Mai and her husband, Kevin Pham, a fellow refugee, took over the business and reopened as Nahm Thai in October 2007.

Their success, including receiving a star from the highly sought after Australian Gourmet Traveller two years in a row (that's one for each year they've been operating) and a place in WA's top 10 restaurants, comes from each partner's individual strengths across different disciplines.

Mai controls the floor at the front of house while Kevin, who has had no formal training, runs a very tight ship in the kitchen.

"He's a perfectionist and he demands excellence," Mai says.

Regardless of his lack of training, Kevin has plenty of experience in the kitchen.

From 2000 he owned the three Red Orchid restaurants across Perth, which he describes as Thai fast food, selling them in early 2007.

But the couple believes their success is primarily because they love what they do.

"Honestly, everyday we go to work at Nahm Thai I pinch myself realising I do enjoy opening the doors and coming into work every single night. I ask myself the question 'do you want to go to work tonight?' and yes I do."

Kevin answers the same question the same way because he's passionate about what he's doing.

"You must enjoy what you're doing, if not it's very tough," Kevin says.

Despite their enthusiasm, it's safe to say they don't want their two-and-a-half year old daughter, Vanthi, to follow in their very successful restaurateur footsteps.

And they are honest about the difficulties of working with a spouse, suggesting it's very challenging despite how well they work as a team.

In addition, Mai and Kevin are currently studying law together and are both in the third year of their degrees at Murdoch University.

Just don't expect a legal firm to be their next venture.

Instead, Kevin has an idea for a new style of restaurant yet to be seen in Perth - an Asian tapas bar involving flavours of India, China, Vietnam and Thailand to name a few.

"If he opens an Asian tapas place he would know how to cook different cuisines and I believe he would be able to make it very tasty, and still authentic, across all of them," Mai says.

Kevin suggests the secret lies in balancing the flavours.

"A good Asian chef must have a good palette, the whole thing is balancing flavour, just like when you play music," he says.

"You need the right note or it sounds out of tune; it's the same with food."