Tearing down walls at The Bayswater

The much-maligned Bayswater Hotel is back in the good books with a new look and new food and entertainment offerings. 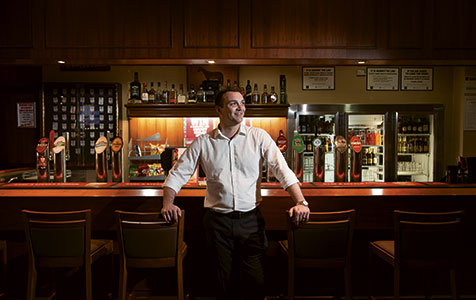 The much-maligned Bayswater Hotel is back in the good books with a new look and new food and entertainment offerings.

Urban legend and Perth’s rumour mill have combined over many years to give The Bayswater Hotel an unwanted reputation for links with outlaw bikie gangs.

Now, eager to remove their hotel from the yoke of that negative perception, the owners have brought in former Flying Scotsman general manager Jim Wilson to help in a $3 million makeover.

Mr Wilson was responsible for transforming Mount Lawley’s The Flying Scotsman to the popular late night hang out it is now.

He said the Bayswater presented a similar challenge.

Understanding the bar’s reputation has been the first hurdle, and Mr Wilson told Business News he was at a loss to explain where the association with bikie gangs came from.

Mr Marchesi said rumours about the pub being owned by bikers had been circulating since he and Mr Sardelic bought the venue in 1981.

The ‘connection’ between gangs and the hotel may have been given currency by the fact that the headquarters of a notorious bikie club is in Bayswater, or the occasional presence of patched members in the hotel bar, but nevertheless Mr Marchesi said there was no truth to the claims.

“It’s absolutely not true,” he said.

“Now and then, way back then, we would get some bikies in but they never caused any problems.”

The third owner, Charles Letizia, joined the pair in 1991 and took on the manager’s role. Mr Letizia – a property developer – also has no links with motorcycle clubs.

Mr Wilson sees the refurbishment as an opportunity to build on the hotel’s long-term connection with local patrons and promote The Bayswater to a wider clientele.

“I think that, until relatively recently, The Bayswater has been a blue-collar pub,” Mr Wilson told Business News.

“Our 1898 bar is a tradies bar, you get guys knocking off from the building site, having a few beers, then going home; I think that’s the element that people just get the wrong perception of.”

The owners are serious about changing that perception, funnelling $3 million into rejuvenating The Bayswater’s image.

It started with increasing the number of hotel rooms from 21 to 41 and significantly renovating the existing rooms – a development that has just been completed.

The next, and current, phase of the rejuvenation involves tackling the dated restaurant and bar and improving its reputation.

As part of that, Mr Wilson has been working on a new menu to offer some variation from the traditional salad bar and buffet, which has attracted Bayswater locals for years.

“I couldn’t take that away if I tried,” Mr Wilson said.

“It makes up too much of our trade.”

Instead, he is keeping the existing bar and buffet menus to ensure long-time locals don’t feel alienated, and introducing the a la carte menu as an add-on.

“You don’t want to change too drastically,” Mr Wilson said.

Mr Wilson has also recruited a DJ to spice up Friday nights and is considering other ways to draw in the younger population that is moving into the Bayswater area.

“It’s really just about opening up the options and trying to get people through the door in the first place,” he said.

“If we don’t offer any reason for people to come in here then they’re not going to.”

Mr Wilson said attracting new patrons in through new entertainment and food offerings was only part of the strategy – the physical appearance of the building also needed work.

“That’s what I’m really excited about getting my teeth stuck into,” he said.

“You could actually drive past and not know that a pub of this size was here.”

Mr Wilson said he was seeking approval from the City of Bayswater to amend the façade to make it more modern and inviting.