Tony Abbott may believe 2014 has been a year of achievement for his government, but its legislative shortcomings are all-too apparent. 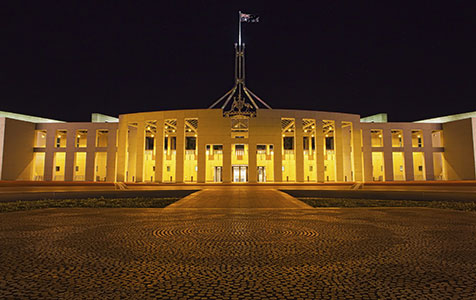 BLOCKED: The government’s legislative agenda is spinning its wheels.

Political commentators in the US have a number of terms to describe presidential administrations facing the type of predicament currently confronting the Abbott government.

Three that readily come to mind are lame duck, rudderless, and gridlocked.

All are apt descriptions of the bind team Abbott is facing because the prime minister heads a coalition that doesn’t dominate the Senate.

Unfortunately for the government, Tony Abbott and his ministers show no sign of a coherent strategy to negotiate their various legislative programs through the upper house.

That’s a complicated mixture of ideologies and personality types.

Clearly blue tie-wearing Liberal MPs not familiar with the turns and twists of the 21st century’s complex brew of ideologies and political machinations find this baffling and disconcerting.

But that’s no reason to be confounded.

Whoever claimed politics, like life, was meant to be easy?

Clearly team Abbott has failed to behave like competent military officers who, by now, would have objectively assessed the lie of the land and likely battlelines ahead.

By that I mean seven of the eight (excluding Senator Xenophon, who’s so popular in Adelaide he even threatens Labor Senate hopefuls) crossbench senators will need preferences aplenty the next time they’re facing voters.

Quite simply, the Liberals should let them know that being cooperative (which doesn’t mean expecting obsequiousness) enhances their chances for a high spot on coalition ‘how to vote’ cards.

I’m sure senators Lambie and Muir, especially, understand that language, since it could be the difference between their being a one-term senator or a two-termer.

The government so far has clearly lacked the ability to consult with and explain proposed legislation to each crossbencher, who should be viewed as legislators, not outsiders.

Hasn’t team Abbott twigged yet which of its MPs get along well, or relatively well, with each of the crossbenchers?

If not why not?

Maybe knockabout Barnaby Joyce, not the generally sombre Senate leader, Eric Abetz, is the one who should be dealing with Senator Lambie.

If not him, perhaps Senator Michaelia Cash.

We know, for example, that Western Australia’s Senator Mathias Cormann is broad spirited enough to mix it even with former Labor icons.

Back in March, The Australian Financial Review carried an intriguing report, from which I quote.

“Within days of his appointment [Finance Minister], Cormann made a symbolic visit to the person who set the modern standard for the finance ministry, a hard-as-nails crusader against wasteful government spending, former Hawke government minister Peter Walsh – the only post-war Labor finance minister to produce budget surpluses,” it reads.

“The meeting was set up by former Gillard government resources minister Gary Gray.

“Gray and Cormann have a cordial relationship, an acquaintance that goes back to the days when they moved in the same Perth resources sector circles.

“Gray is Peter Walsh’s son-in-law and he invited Cormann and his wife, Hayley, to a dinner at his home with the Walshes.

“Cormann had previously met Walsh and was an admirer: he had a copy of Walsh’s political memoir, Confessions of a Failed Finance Minister.”

Clearly – repeating that old cliché – there’s more than one way to skin a cat.

But another thought came to mind after listening to a recent radio interview with Mr Abbott during which he used the word ‘sabotage’ to describe Labor’s approach of choosing to block the coalition’s budget measures.

Colebatch exposed the bloody mindedness of a power-hungry cohort of wartime union bosses who wilfully utilised a range of tactics to thwart Australian military efforts.

If Mr Abbott was smart he’d buy eight copies of Australia’s Secret War and have them delivered to each crossbencher as a 2014 Christmas gift, with the following words handwritten inside: ‘Hope we’re not reliving old times. Best wishes for 2015, and beyond. Tony.’

That may be a better option than risking a double dissolution election next year, because as it currently stands the Abbott government would struggle to win over the voting public.

Whichever road it takes, the government needs more than a press conference and a reboot to advance its legislative agenda, and set itself up to win the next election – whenever that may be.