Taxpayers always carry can for profligacy

Financial crises in the US and Europe have done little to slow the enthusiasm for big spending of the federal Labor government and that of Colin Barnett. 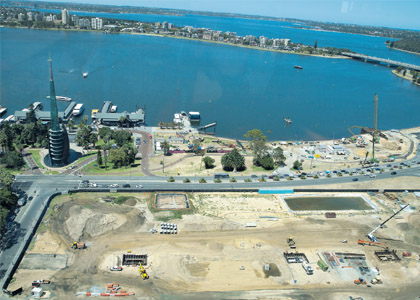 Financial crises in the US and Europe have done little to slow the enthusiasm for big spending of the federal Labor government and that of Colin Barnett.

WESTERN Australian taxpayers face an unwelcomed double whammy from public debt burdens being loaded upon them that will be felt for decades to come.

Simply put, the reason is that the five years of federal Labor, and four-plus years of the Barnett government in WA, has been a time of unprecedented public spending and/ or borrowing.

Whenever individuals, families, clubs, countries, or states spend beyond what’s being earned on a protracted scale, there’s eventually a reckoning.

Anyone doubting that simple proposition need only look at the parlous financial state the Northern Hemisphere’s two major economic blocs - the US and European Union - find themselves in.

Nearly all EU members have been on spending sprees and/or borrowing binges for decades, and crunch time finally came.

That’s why we keep hearing of their bailouts, credit crises, repayment burdens, and ratings slumps.

The US, including many of its states and cities, are in similar financial straits; victims of decades of thoughtless spending undertaken by myopic politicians who have since moved on, either to their grave or handsomely pensioned lifestyles.

With these disastrous cases so vividly before Australian politicians’ eyes, you’d think Canberra and Perth would be pulling in their horns, balancing the books, trimming outlays and borrowings, and canning super-spending sprees.

Both the Gillard and Barnett minority governments have, foolishly, steered towards bigger spending as if bleak EU and US-style tomorrows can’t happen here.

The situation is becoming so perilous that one can confidently state we’d now all be better off had John Howard and Peter Costello retained power in December 2007, and Alan Carpenter and Eric Ripper done likewise in September 2008.

When viewed thus, the 16 months between those contests represents a crucial unwelcomed watershed, during which Mr Rudd and Wayne Swan gained control over the Treasury in Canberra, and Colin Barnett in Perth.

The dire consequences of the change-over from Howard-Costello to Rudd-Swan, followed by Gillard-Swan, was concisely presented by Melbourne public policy analyst, Terry McCrann, in a telling column (The Weekend Australian, December 22-23 2012).

“Wayne Swan, Treasurer: five budgets, five deficits, adding up to $174 billion, and counting. And if there’s a sixth?” McCrann wrote.

“Peter Costello, Treasurer: 12 budgets, 10 surpluses. The two deficits added to all of just $7bn, the surpluses added to $107bn.

“The net $100bn rather neatly paid off the $95bn of inherited Keating debt.

“Swan got to start with zero net federal debt. His successor won’t.

“And if the truth be known, those surpluses owed more to the irascible ‘old-style salt of the earth’ Labor finance minister of those few years, Peter Walsh.

“So the modern Labor record is just three surpluses in 18 budgets, for a total net deficit of $256bn and still counting, interrupted by Costello and his 10 surpluses and $100bn in debt repayments.”

That’s what happens in Canberra whenever Labor gets into the cookie jar called Treasury.

Perth, unfortunately, is similarly placed, thanks to Mr Barnett’s long-standing proclivity to spend wildly as he leads a team of mute ministers and backbenchers.

No-one has had the gumption to say ‘stop’.

Speaking to two concerned community groups late last year, Mr Eastwood said: “Having been a staunch Liberal supporter for all of my life, these comments are not about party politics but about how our present government has spent our taxpayer dollars.

“With a net state debt of $3.6bn dollars three and a half years ago [the Carpenter-Ripper years], we were easily convinced that the coming mining boom would solve all of our problems.

“Right now, after just three and a half years of that mining boom we have a state debt of approximately $17bn.

“That’s an increase of 460 per cent in that short period.

“On current estimates our net state debt will reach $24bn by the 201415 financial year.

“Even with our projected population explosion that’s an increase from $2,100/head of population to approximately $11,500/head.

“Such an increase in debt levels will have occurred during the most profitable five years in WA’s history.

“Why spend close to $1bn on Elizabeth Quay? This is a project which will yield no obvious social, cultural, environmental or commercial benefit to our city and the diversion of Riverside Drive with its nine to 10 sets of required traffic lights can only add to the traffic chaos, which is obviously getting worse by the day.

“In the current financial climate, why would we be spending a further $1.2-$1.3bn building a new Perth Stadium.

“Well, our government has the answer. We won’t build it at all.

“We will enter into an arrangement that will let a private developer design-build-finance and maintain the stadium and our government will rent it back over a 25-year period.

“Sounds good, but, any private developer will have to recover the cost of the write-off of the asset they create, manage principal repayments, and finance the project, at interest rates much higher than any government would pay, plus yield an acceptable profit over the 25-years of the arrangement.

“This method of financing a stadium is bound to cost us, the taxpayers, three or four times the initial estimate to build such a facility.

“Is this really the way to finance our public infra-structure?

“Our state’s AAA-credit rating must be close to being sorely tested.

“A loss of that coveted rating will mean even more pain for the WA public.”

I therefore doubt Mr Eastwood was surprised to read just before Christmas a press report saying WA was “on the edge of its own mini-fiscal cliff, with international [credit rating] giant Moody’s placing the state’s cherished triple-A financial rating on negative watch.” Moody’s warned that WA’s growing debt - meaning that Mr Barnett continues imposing on us - and volatile resource-related revenues, were undermining WA’s “rolled-gold financial standing”.

“If WA lost its triple-A status it would spark a jump in the state’s interest costs on the Barnett government’s ballooning debt, which is more than $14 billion but projected to peak at $23.2 billion in 2014-15,” the report continued.

“Moody’s said its decision to downgrade WA’s triple-A rating outlook from stable to negative was because its spending was outpacing increasingly volatile mining-dependent revenues and debt was growing to levels ‘high in comparison with other Australian states and international peers’.”

This therefore means present and future generations of Western Australians are set to become ‘Barnett’s bunnies’ by having to repay all those mounting dollars owed while he’s enjoying his whopping parliamentary pension’.