Lifestyle changes following a disease diagnosis have led a Perth woman to an unexpected business success. 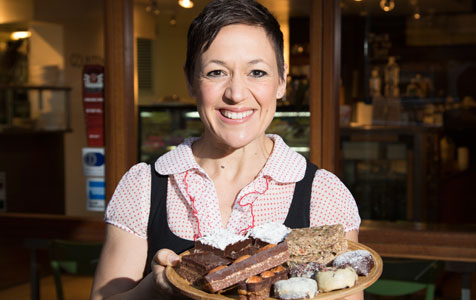 SWEET SUCCESS: Laila Gampfer’s raw food business has grown from a market stall to a widespread wholesaler in only a year. Photo: Attila Csaszar

Lifestyle changes following a disease diagnosis have led a Perth woman to an unexpected business success.

The growth trajectory of Rawsome raw food business has astounded many, but none more so than its creator, Laila Gampfer.

“It blows my mind,” Ms Gampfer told Gusto. “A year ago I was just selling out of a market stall on Sundays.”

Now, Ms Gampfer is delivering her sweet treats made solely from raw ingredients to 80 stockists around Perth.

She has 14 staff working in the business and is producing about 550 dozen individual serves per week – a far cry from the 24 dozen she was selling at the Western Farmers Market in Palmyra little more than 12 months ago.

Ms Gampfer’s interest in raw food began only about two years ago when she was diagnosed with coeliac disease, which prompted her to look for gluten-free alternatives.

“I found that the gluten-free products that were on the market were either loaded with sugar, or they would take the gluten out and replace it with harmful ingredients or preservatives and things that I just didn’t want to have in my diet,” Ms Gampfer told Gusto.

“So I started experimenting with raw food ingredients and to create my own treats, and people around me who have conventional diets were going ‘these are amazing you should go into business’.”

The products – which are vegan and paleo-friendly and free of grains, dairy, soy, gluten, sugar and eggs – were so popular that the market stall would sell out by 9:30am each Sunday.

The next step for Ms Gampfer was to switch from retailing to wholesale marketing.

Her first wholesale customer was Manna Wholefoods & Café in Fremantle, and there’s been no letup in demand since with new, would-be stockists asked to join a waiting list.

Since May, Rawsome’s weekly turnover has multiplied by a factor of four, and is now approaching $20,000 a week.

Ms Gampfer says she was lucky in that her business germinated alongside a growing interest in raw food.

“The fortune that I’ve had is that it’s come at the right time, the general public are quickly recognising that their health and the way that they feel is highly related to their diet and nutrition,” she says.

“While they still want the sweet treats, they’re looking to move away from the conventional things that make them feel lousy and sick.”

Consuming food in its ‘raw’ form – when it’s unprocessed and kept under 40.6º C – is said to be easier for the body to process, and thus eliminates the toxins that contribute to ill-health.

But Ms Gampfer says she encounters a lot of scepticism as to whether treats void of traditional ingredients can taste as good as the real thing.

“All those things (dairy, sugar, grains) are what we relate to good taste,” she says.

“But we allow the product to sell for itself. We drop off a product and say ‘have a taste, if it’s something that you enjoy and that you think your customers will enjoy give us a call back and we’ll go from there’.”

With the list of stockists currently at 80 and supermarket chains now showing interest, it’s fair to say much of that initial scepticism is overcome once the goods have been tested.

Ms Gampfer says she’s coming to terms with Rawsome’s growth and attempting to expand sustainably so current clients are still well looked after.

Yet significant milestones in Ms Gampfer’s five-year plan remain – the next being a Rawsome cafe and restaurant.

It’s hoped that will be open by Christmas, followed by a takeaway coffee and treat shop in the Perth CBD and expansion into other Australian states.