Tantalising gold recoveries for Novo in the Pilbara

Pilbara conglomerate gold theorist Novo Resources has generated rich concentrates from ore sorting trials at its Comet Well project near Karratha, producing ore grades up to 792.4g/t gold. The company also separated coarse gold nuggets from gravelly ore horizons at its Egina project near Port Hedland using gravity techniques and it has suggested that the procedure could be ramped up to a larger scale in the future. 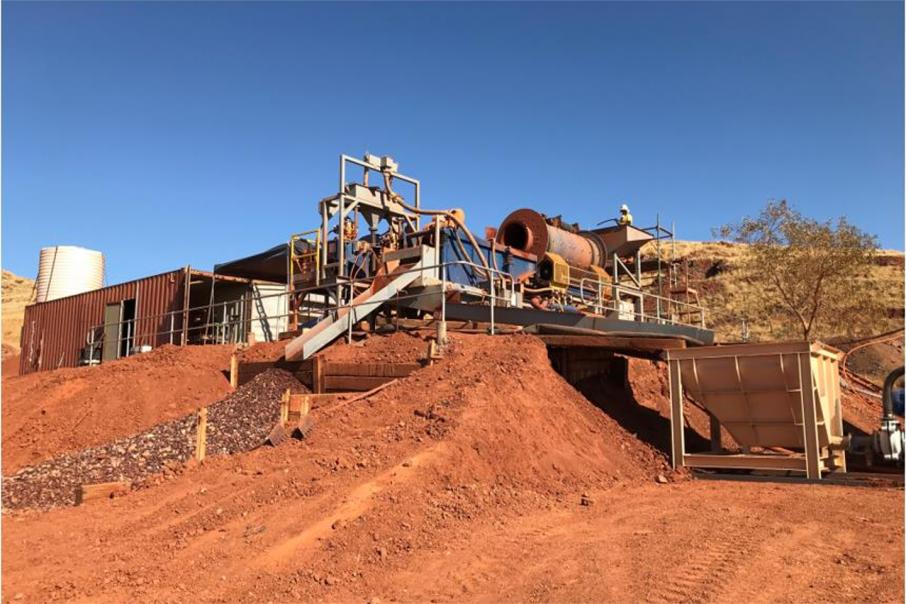 The initial bulk samples weighing between about 4 tonnes to 5.6 tonnes each were crushed, screened and then tested using a “TOMRA” mechanical rock sorter on the fractions between 6mm and 63mm in size.

The results were striking, with the ore sorting trials producing remarkably small masses of ore concentrate between 3.2kg and 19.1kg, which assayed very high gold grades between 92.1g/t gold, up to a knee-trembling 792.4g/t gold.

According to the company, the initial ore sorting trails were undertaken to assess the potential viability of this method as a means of concentrating coarse conglomerate gold from its broader Karratha project holdings.

The high grade gold assays from the sorted concentrates provide the first indication that this technique is potentially suitable for upgrading the widespread conglomerate-hosted gold deposits into much smaller volume ore parcels.

Novo will now seek to optimise the crushing stage to reduce the amount of fine and oversize materials, thereby maximising the amount of material available for the ore sorting process and in effect, recovering more of the gold.

“Total system gold recovery efficiency will be fully understood upon receipt of assay results from all process streams and feed size ranges, with these results expected during January 2019”.

The company excavated a bulk sample of about 150 tonnes of the gold-bearing alluvial gravel horizon at Egina and this material was treated through Novo’s gravity gold plant on-site.

The technology simply uses a number of gravity separation techniques to extract fine gold and coarse gold nuggets from the excavated gravel materials.

The company recovered about 3.5 ounces of fine gold and small nuggets from the trial, with portable XRF analyses indicating a purity of about 91-93% gold, with the balance mainly being silver.

Importantly, more than 80% of the gold mass was recovered in coarse gold nuggets from the Egina gravels, which suggests that the small-scale processing technique employed could be ramped up successfully to a larger scale in the future.

Novo said that there is not much clay present in the gravelly ore horizons at Egina, which simplifies the gravity recovery process via short scrubbing times to remove any of the clay material that is present.

The company is planning an aggressive program to collect and treat bulk samples at Egina in 2019, in order to determine a maiden mineral resource for the gold project.

Novo believes that Egina may host a significant gold deposit, with the shallow nature of the gravel horizons making them enticing for a future bulk mining operation, particularly based on the results of the recent gravity separation trials.

Mr Humphyson added: “The results of our first bulk sample at Egina are very encouraging. This 95 cubic metre sample was collected from a gravel horizon between 1m and 3m below surface, requiring no drilling, blasting or crushing.”

“The current geologic model has not constrained the gravel horizon in any direction or for any distance across the erosional terrace.”

“We are very excited about the possibility for this system to be laterally expansive, with obvious connotations for a future large scale and low cost mining operation”.