Tag teaming at Willy’s, The Goat

The owners of two Perth cafes had grand plans when they started out ... then the business got in the way. Emily Morgan reports. 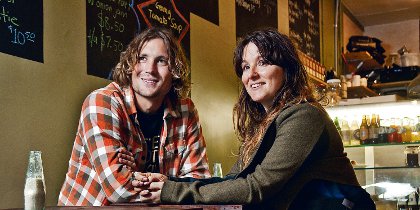 ROB Mayberry and Annie Murphy may call themselves amateurs when it comes to business, but they are starting to play the hospitality game like seasoned pros.

The business partners and long-time friends started Cottesloe’s The Dancing Goat three and a half years ago and Little Willy’s in Northbridge a year ago, and while they went into business with dreams of taking months off at the beach in between ‘shifts’, things have worked out differently.

A stream of mums and school kids fills the cafe Mr Mayberry and Ms Murphy affectionately call ‘The Goat’ on a daily basis, while Little Willy’s on William Street is full of business people, students and visitors to Northbridge during the week.

They are a relaxed and friendly pair, who obviously relish working in the cafe business; but they have had their fair share of challenges.

They took their time to develop The Goat, gradually extending trading hours to include weekends, and say their small staff numbers made it a relatively easy change to manage.

“It was a really good starting block; it was just the two of us at first, and we had visions of taking three months off a year, but it doesn’t quite work like that,” Ms Murphy told Gusto.

“The first time was all adrenalin as well. It was so exciting, it was something we had wanted for so long.

“We proved to ourselves we could do it with The Goat.”

Mr Mayberry says they had prepared for working long hours in the shop when they first opened, but that learning the intricacies of business – like tax requirements and insurance – had been more of a surprise.

After getting a grip on how to balance the workload after two years of running The Goat, Ms Murphy and Mr Mayberry started eyeing new opportunities.

“One of the reasons why we wanted to open Willy’s is we had gotten to a point with The Goat where it was, not running itself, but the challenge was almost over,” Ms Murphy says. “This was like a fresh canvas.”

Mr Mayberry agrees, adding that if Little Willy’s hadn’t come up the pair most likely would have started working evenings at The Goat, maybe even applying for a liquor licence.

When they did open Willy’s, however, they found themselves stretched between the two cafes.

“We were doing things day by day there (The Goat), rather than having set out ways to do everything,” Mr Mayberry says.

Dividing their time between the two locations, and the need for more staff forced them to implement cleaning and food preparation rosters and keep track of supplies more closely.

“This place [Willy’s] made us get the formula,” Ms Murphy says.

They initially both worked in the Cottesloe and Northbridge cafes, but more recently Mr Mayberry has focused on Northbridge while Ms Murphy has been spending the bulk of her time in Cottesloe.

Fourteen staff are now employed between the two locations, the hiring of which Ms Murphy said was stressful.

“I think we were in denial that we needed people and that was really daunting,” she says.

Given the pair’s comfortable, easygoing familiarity with customers, there was concern the absence of either would have an effect on business.

“Most of the business is attached to Annie and I. People were so used to seeing us there all the time so when we weren’t there it just didn’t work so well for a little while,” Mr Mayberry says.

But with time, he says, they have grown the team with like-minded people, mainly through word of mouth hiring, and customers have responded well to the change.

Willy’s has also offered them the opportunity to develop a more extensive menu.

The kitchen at The Goat is smaller and more limited in its capacity but they have plans to broaden the menu at Willy’s, realign the cafe to create more space and potentially develop space in the courtyard out the back; but all in good time.

“We don’t do anything too quickly, it is a slow process, baby steps,” Ms Murphy says.

Mr Mayberry says introducing an entirely new menu to the kitchen, given how busy Willy’s has become, would create challenges.

“If we could do it all in one go, tomorrow, we would open evenings and weekends but we don’t have the staff to do that. You need to do it slowly. If you did it all at once there would be a massive staffing blow-out, there would be hours when we would be totally dead, but if you gradually do it there isn’t so much strain,” he says.