Sub-sized fleet can’t do the job

Australia needs a submarine fleet of 24 to cover the nation’s future needs. 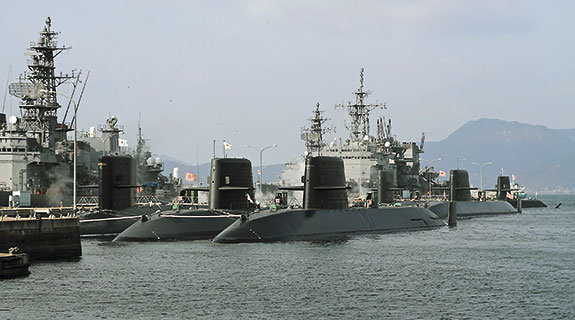 HARDWARE: Japan has been suggested as the government’s preferred option to build Australia’s next submarine fleet. Photo: iStock

Australia needs a submarine fleet of 24 to cover the nation’s future needs.

A Knowledegable informant tells me there are currently about 650 operational submarines worldwide.

He said estimates suggest that, by 2025, there’ll be about 350 submarines operating in waters between the Persian Gulf and the Sea of Japan.

In other words, within a decade the waters to Australia’s north and north-west will be home to about half the total number of submarines now sailing the waters worldwide.

Although this move towards regions of greatest interest to Australia has been gathering pace for years, the trend beyond 2025 will bring an ever-increasing level of submarine activity to the waters near our continent.

It’s crucial to realise submarine forces of six, 12 or 24 don’t mean those numbers can be put into action at any one time.

Essential repairs, maintenance and upgrading requirements generally mean only half of a fleet is combat-ready at any given time.

Therefore the sooner we move towards acquiring that number, even though this will somewhat stretch financial and other resources, the better.

Unfortunately, nothing happened after that 2009 white paper, so we’re still confronting the same predicament.

Getting out of the blocks to acquiring a 24-strong submarine force to meet challenges from 2025 is now needed more than ever.

There are two overarching reasons I’ve opted for a 24-strong force.

Firstly, the city-island Republic of Singapore, with its population of 5 million-plus has, like island-continent Australia, six submarines.

Australia’s nearly 24 million people – four times the population of Singapore – should therefore be able to move along that metric.

The other reason is there’s much to be learned from 1914-15, when Australians and New Zealanders teamed-up in a time of need, namely when Germany threatened the Pacific and Indian oceans with raiders such as SMS Emden and Konigsberg (dispatched from a Chinese port, mind you).

Few, if any, Labor and Coalition MPs seem to give consideration to our need for a sizeable submarine force capable of contesting in both oceans and adjacent waters 100 years on.

Clearly a wise way of doing so is to again team-up with New Zealand – population, 4.5 million and no submarines – to create a joint submarine command of 24 submarines for two ocean purposes.

Why hasn’t it happened?

Mainly because Canberra politicians are too busy spending taxpayers’ dollars in areas that are primarily the responsibility of state governments.

If Canberra simply vacated a range of spending areas such as health, education, environment, and transport, money saved by eliminating costly duplication – currently running at about $30 billion annually – would be available for defence, the forgotten primarily reason a federal Australian was created in 1901.

Twelve submarines operating from Garden Island, and the same number in Brisbane or a nearby base and Auckland would make Australia-New Zealand a credible Pacific and Indian Ocean force from 2025 onwards.

If politicians of both parties hadn’t been sitting on their hands, April 25 2015 – the centenary of ANZAC Day – would have been the perfect moment to announce the creation of a joint, two-ocean, Australia-New Zealand submarine command.

That entity could have included an equitable per capita sharing of cost of building, manning and maintaining such a 24-strong submarine force.

Instead, what do we get?

Hints are already surfacing that the Abbott government may instead opt for just eight replacements for our present six submarines.

“The government has announced details of the tender process for designing and building the submarines, at an estimated cost of $50 billion,” a February 21 ABC radio report said.

“Prime Minister Tony Abbott was fielding questions on the tender process yesterday when he nominated a smaller number of submarines.

“‘Sustainment alone, on the basis of an eight-submarine, as opposed to a 12-submarine fleet, will produce an ongoing 500 additional jobs’,” he said.

“Senator Nick Xenophon said the government was sending confusing messages and needed to explain exactly what would be commissioned.

“‘It also doesn’t make sense when German and other overseas submarine manufacturers are saying they could build 12 highly capable subs in the region of $20 billion’.

But a spokesman for Mr Abbott said the figure of eight submarines was only used for ‘illustrative purposes’.

The spokesman said the exact number of submarines being built would depend on the outcome of the defence white paper which is expected later this year.”

It most certainly prompts me to believe that the coalition will eventually announce an order for eight – one-third of real needs – submarines for 2025 and beyond.

It must be 24, not 12 or eight, for dual, not single, ocean purposes, with New Zealand fully integrated.