Development drilling at Ora Banda Mining’s Callion gold project has delivered some impressive initial results including a 4.8m underground intercept going well over an ounce to the tonne gold from 232 metres, including 0.3m at 498.2g/t. Delineation drilling at the North Eastern goldfields deposit also focused on the open pit development area with one drill hole grading 10.0m at 8.0g/t from 76m. 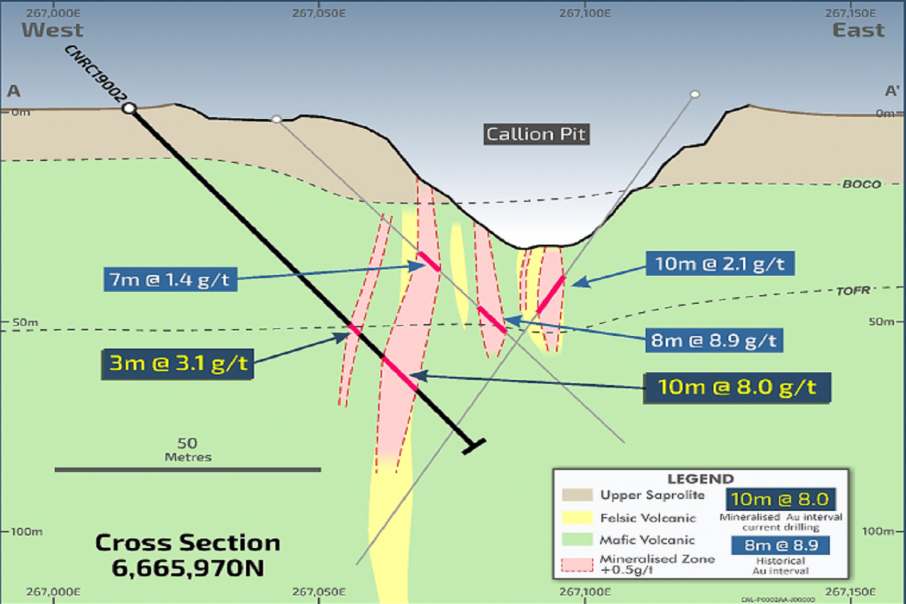 It appears that Ora Banda Mining can do no wrong with the drill bit after reporting a grab bag of impressive open pit and underground results from its Callion gold deposit.

A total of 46 RC holes for 5,962 m and 15 diamond tails for 1,689 m have now been ploughed into the deposit in Phase 1 of the Callion resource definition drilling program.

The company expects that the assay results for the remaining 23 holes at Callion will be received in mid-February setting up a degree of market anticipation after the very successful initial round.

Management said that an upgrade of the Callion deposit resource model is now underway.  Ora Banda’s conceptual plan for the Callion deposit includes a new open pit cut back to re-establish access to the historical underground mine workings that have been mothballed for some years.

Development works will include rehabilitating the existing underground mine infrastructure where required to extract a number of high-grade zones that remain within the current mine.  The development and extraction of new high grade areas below the existing mine workings will likely follow this initial effort.

Ora Banda Mining’s Managing Director, David Quinlivan, said: “These initial results are consistent with the Company’s development objectives for Callion. We are targeting Callion as it is historically known for its high-grade potential. We are pleased to see this is holding true in the results that have been returned. We look forward to receiving the remaining assay results and progressing with the Mineral Resource update.”

The Callion Deposit is located 13km South West of the old Davyhurst Mill, within the North Eastern Goldfields of Western Australia.  It has been mined underground since the early 1900’s by various operators that included WMC, Croesus Mining and the Callion joint venture.  Total recorded historical production for the Callion deposit is 280,000 tonnes grading an impressive 10.2 g/t for 91,650 oz of gold.  The total tonnage extracted was split between the open pit deposit of 135,000 tonnes at 4.1 g/t for 17,600 oz of gold and the underground deposit of  146,000 tonnes going 15.8 g/t for 74,000 oz of gold.

The current infrastructure at Callion includes an open pit of 650m in length and 40m in width and underground workings extending off the southern end of the pit, to a depth of 220m below surface.  The company said the current resource for Callion stands at 169,000 tonnes at 2.6 g/t for 14,000 oz of gold.

With a significant amount of drilling data coming in now to support an update to the gold resources at Callion, it will be interesting to see just where this resource finishes ahead of any move to mine it.