Strike Energy has agreed to share the rig mobilisation costs with another Perth Basin operator to drill its exciting West Erregulla gas permit just north of Perth in WA, with the program expected to kick off in May. Recent reprocessed 3D seismic work produced gas volume estimates ranging between 607 and 1,296 billion cubic feet for the Kingia-High Cliff targets, with a best estimate of 916 bcf. 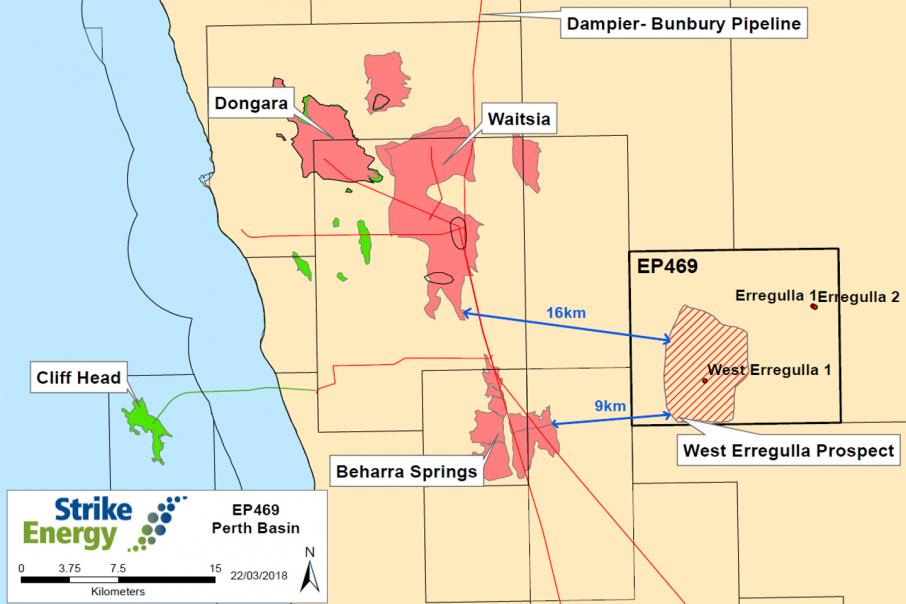 ASX listed oil and gas exploration company, Strike Energy, has agreed with another Perth Basin operator to share the considerable costs of mobilisation of the large Easternwell 106 drilling rig to the Perth Basin to undertake drilling at its exciting West Erregulla-2 exploration permit in May this year.

According to the company, reprocessed 3D seismic has increased the likelihood of greater gas volumes for West Erregulla, and it is now one of the largest pre-drilled conventional onshore prospects in Australia.

Strike has high hopes for West Erregulla, which is believed to be an onshore Kingia-High Cliff conventional gas target, possibly similar to the adjacent Waitsia gas field that is being operated by Australian petroleum major, Beach Energy.

Recent reprocessing of the 3D seismic produced gas volume estimates of between 607 billion cubic feet or “bcf” and 1,296 bcf, with a best estimate of 916 bcf, of which Strike holds a 50% share with Warrego Energy Limited.

In addition, the company has estimated a best estimate of 247 bcf for a basal fan identified on the processed 3D seismic, located in the Wagina formation that lies above the Kingia-High Cliff targets.

Together, the total stacked gross prospective best estimate of gas resources at West Erregulla now stands at 1,163 bcf and ranges from a low estimate of 761 bcf to a high of 1,668 bcf.

The beauty of West Erregulla is that it is located right next to existing gas transport infrastructure just like Waitsia, including the two major gas transmission pipelines of WA.

Strike has previously stated that gas demand in WA is expected to rise from 2020 as existing supply from the North West Shelf declines and major industrial gas users have flagged market growth.

The gas volumes and rising demand are expected to be sufficient for West Erregulla to be considered for a standalone development, should the drilling prove successful.

Additionally, the potential for Waitsia and West Erregulla to nearly triple the discovered reserves of the Perth Basin is a clear signal that this petroleum basin is relatively under-explored.

With respect to the upcoming drilling program, Easternwell Group Chief Executive Tim Phelan said: “It is exciting to be working with Strike to bring Rig 106 to the Perth Basin to drill one of the biggest conventional targets in Australia. The selection of Broadspectrum’s subsidiary Easternwell, plays to the strength of our organisation in delivering high impact wells within challenging environments and we look forward to drilling West Erregulla-2 with Strike.”

Strike Managing Director Stuart Nicholls said: “It has been quite an achievement by Strike to come into the EP469 JV in June of last year and already be preparing to drill this highly attractive prospect.”

“The increase in neighbouring activity from other operators highlights the quality and prospective commerciality of the Kingia-High Cliff trend to the South East of Waitsia.”

“The uplift in pre-drill prospective volumes of the stacked plays points to the increased significance of the success of West Erregulla in becoming a potential key contributor to Western Australian domestic gas markets as they tighten going into the 2020s.”