One of the oil industry’s top analysts has given a very positive report on Strike Energy as it embarks on a drill program with the potential to save the east coast gas market from its supply shortage. Peter Strachan’s new report concludes Strike is worth 66% more than its current share price and that’s before the high-impact Jaws drilling program gets underway in the Cooper Basin. 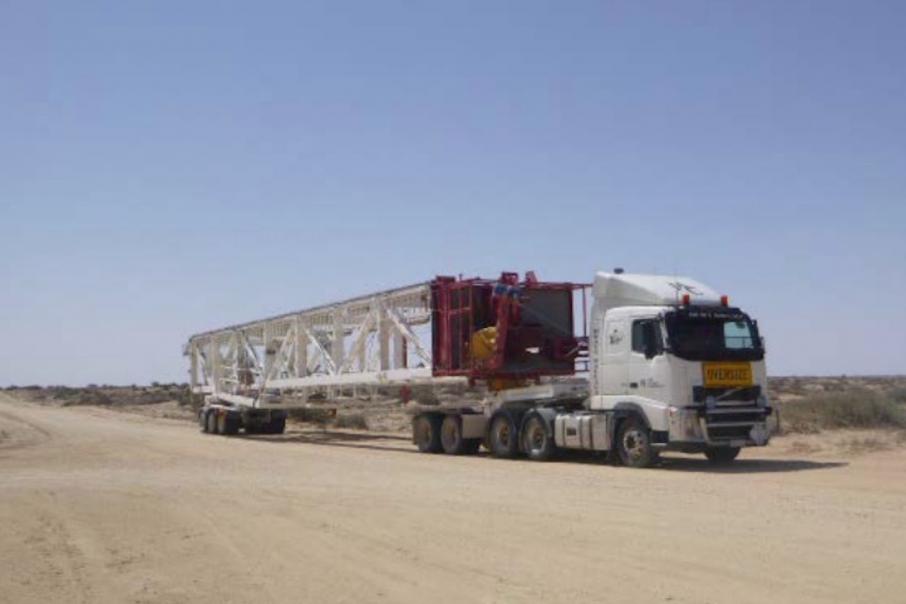 The Ensign rig on the way to the Klebb field

Strike Energy’s bold, unconventional gas project in the Cooper Basin has been given a positive assessment by veteran oil analyst, Peter Strachan, who has valued Strike at 66% above its current share price.

In a report released this week, Strachan Corporate estimated that Strike’s flagship Southern Cooper Basin Gas Project could be worth $1.6 billion to the company if the upcoming “Jaws” appraisal drilling program is a success.

A valuation of that magnitude is around 20 times Strike’s current market cap of just $80 million, highlighting just how transformational the Southern Cooper Basin Gas Project could be for the company if they can pull it off. Strike’s 66.7% share of the project has a prospective gas resource of 11 trillion cubic feet which has the potential to single-handedly resolve the east coast gas shortage.

Even before a result from the Jaws drilling program, Strachan put a risked value on Strike of 12.6 cents a share, which is 66% higher than last week’s closing price of 7.6 cents a share.

The positive Strachan Corporate report is significant for the Adelaide-based junior, which had not realised its ambitious Cooper Basin project under a previous board and management.

In April 2017, a new management team, led by ex-Shell executive Stuart Nicholls and well known investment banker John Poynton, began reassessing the project with an emphasis on technical issues and has been kicking goals ever since.

An independent review by world-leading unconventional geologist, Tony Cortis, also ex-Shell, found that gas could be produced from the deep coal beds at the heart of the project and could form the basis of a commercial project for Strike.

The South Australian Government has also lent its support, handing Strike a $2m cash grant last year under its Plan for Accelerating Exploration and a further grant of almost $1 million to move its headquarters to Adelaide.

The proof-of-concept drill program gets underway on February 14 with the spudding of Jaws-1, using one of the most powerful drill rigs in the country. The Ensign 965 rig, which arrived on site last week, will drill to about 2,000 metres and then drill horizontally for 800 metres before a seven-stage hydraulic stimulation program takes place.

First gas flow to the surface is expected in the September quarter after three to five months of dewatering of the coal seam, which reduces pressure and allows “desorption” of the natural gas.

The Strachan report highlights the huge financial upside of success and should help build investor interest as the Jaws drilling program gets underway.

However Strike have identified that their resources sits within a unique geological formation that resembles a saddle with the gas sitting in the dip of the saddle and not subject to typical pressures usually associated with those depths.

It also sits in an extraordinary thick mineralised “pay zone” of over 30m with most typical Queensland coal seam pay zones tapping out at around 5 metres.