Strike Energy is preparing to push the envelope of wellbore capacity by drilling possibly the world’s deepest pure coal-seam well and the first of its kind in the southern hemisphere. The Jaws-1 well in the Southern Cooper Basin is set to spud in mid-February and is aiming to unlock a massive gas resource of up to 11Tcf to help Australia’s eastern states fend off a looming energy crisis. 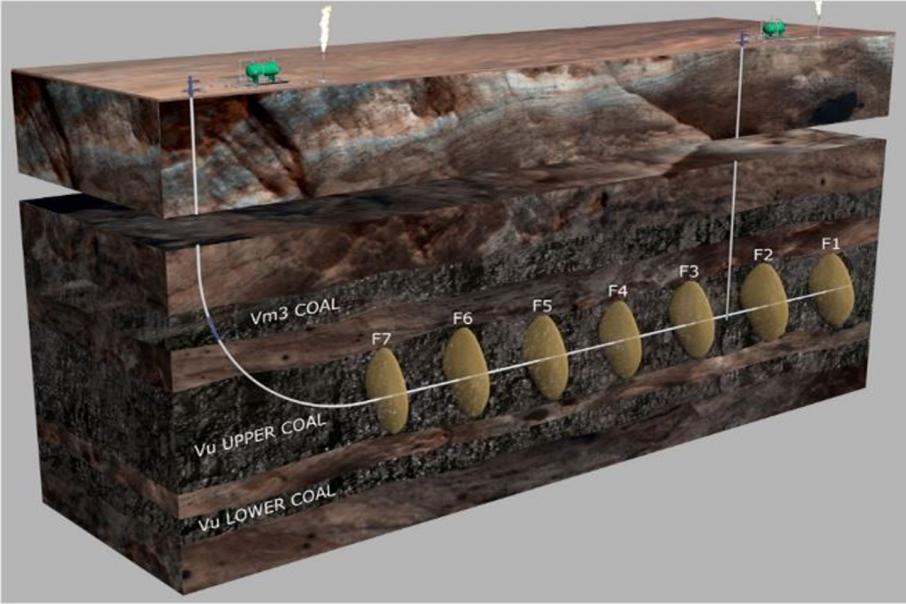 Jaws-1 is aiming to unlock a massive land based gas resource of up to 11Tcf and at 2000m deep, it will be one of the most technically advanced and deepest coal seam gas wells ever drilled. To date, coal seam gas wells of this scale have only been drilled in Alberta, Canada, and Colorado, in the USA.

Typically the economics in a coal seam gas well start to tap out at around 700m deep as the ground starts to become highly pressurised as the well gets deeper. The key to unlocking gas in a coal seam gas well is to first release the water trapped in the formation and this becomes very difficult to do at depth as the ground pressure becomes so great that the water remains trapped in the formation and can’t be adequately released.

Strike however are aiming to turn conventional wisdom on its head by targeting a coal seam pay zone about 2000m deep that according to company management sits in a uniquely pressurised system that should lend itself to coal seam gas extraction.

Strike say their resource sits in a ground formation that somewhat resembles a saddle with the gas sitting in the dipped part of the saddle and not subject to typically huge ground pressures that would normally prevent the extraction of water from the coal seam.

The appraisal well will be 2000m deep and then turned to travel about 800m horizontally before being hydraulically stimulated in seven stages. A second vertical well will also be drilled from surface into the horizontal section. The campaign is targeting a contingent reserve for the Southern Cooper Basin Gas Project as the trigger for a financial investment decision later this year, ahead of first gas, potentially in 2019.

The well will test the gas charged 35m thick Vu upper coal seam. Jaws-1 is more characteristic of a United States shale-type operation than the thousands of coal-seam gas wells operating in Queensland - which are generally drilled to depths of between 400m  and 700m and go into decline fairly rapidly. With a gas pay zone that is between 35m and 40m  thick, Strike will have a serious discovery on their hands if they can get the gas to flow. Typical coal seam gas pay zones in Queensland, whilst much shallower in nature, are only between one and five metres thick.

Whilst Strike’s well will cost more to drill than a typical well because of its greater depth, the company is aiming to achieve at least the same economics as a typical coal seam gas well given its extraordinarily thick pay zone.

All roads may lead to Rome, but in Australia the alpha and omega of gas pipelines is the Moomba gas processing hub, located just 70km to the north of Strike’s Southern Cooper tenements which are conveniently traversed by the Moomba-Adelaide pipeline.

Under a previous Strike management regime, the company drilled five wells that managed to flare gas for an extended period. However, the vertical well design with its narrow 5-inch hole and insufficient pumping technology deployed downhole all conspired to produce sub-commercial outcomes.

This time a number of key changes are set to be made by new Strike Managing Director and former Shell executive Stuart Nicholls and his team that are led by re-known investment banker and Strike Chairman John Poynton.

Those changes include better pumping technology and a wider hole in addition to the inclusion of the 800m horizontal section to be hydraulically stimulated to hopefully produce a commercial result for Strike shareholders.

Jaws-1 will be drilled as a 7-inch hole and Strike will use electronic submersible pumps downhole to dewater the reservoir to free the gas up for extraction.

Strike’s campaign comes at an opportunistic time with Australia starring down the barrel of a feast-to-famine gas crisis and soaring energy prices on the east coast.

Australia’s LNG exports leapt 26.3% to record highs of 56.8mtpa in 2017. This was largely driven by exports to China increasing 40.5% to 17.5mtpa. Two thirds of the country’s gas exports to China and Korea were shipped from the three coal-seam to LNG plants at Gladstone, in Queensland.

The perfect storm that precipitated the east coast gas crisis was compounded by onshore drilling bans in Victoria and New South Wales putting the squeeze on as just as the surge in domestic gas supplies feeding Gladstone’s six trains ramped up from 2.3petajoules in December 2015 to 24PJ in recent times.

In September, the Australian Energy Market Operator warned that the predicted gas shortfall in 2018 could be up to 107PJ, or 17% of expected domestic consumption and that it would back Prime Minister Malcolm Turnbull if he chose to “pull the trigger” by diverting gas exports from Curtis Island, Gladstone, to the domestic market.

The Australian Competition and Consumer Commission said the benchmark spot price for gas in the southeast of Australia in December was $7.40 per gigajoule, up 9% from the previous month and more than double the US average price of $3.82 for 2017.

With industry in New South Wales threatened by a 20-25% increase in gas prices and a 50% hike in electricity, Federal Treasurer Scott Morrison backed Turnbull’s threat to divert export gas for domestic use should the need arise.

“We will not let the power bills of Australians rise further and further because of a shortfall of gas on the east coast of Australia,” Morrison said.

With Moomba’s pipelines at 80% capacity transporting 240PJ and Gladstone’s six trains, with a combined liquefaction capacity of 25mtpa, running 20% short of full output, Strike is spoilt for choice in getting its wares to market.

South Australia clearly wants first bite of the cherry and wooed Strike with a $990,000 Economic Investment Incentive package to relocate its office from Sydney to Adelaide this year.

Jaws-1 is fully-funded up to $9million after a capital raise last year for the drilling operation was oversubscribed. With $8m cash in the bank and access to an undrawn $5.4m debt facility, Strike is in a sound position to deliver targeted first gas from the Southern Cooper Basin Gas Project in 2019.

In a market update on February 22 Strike said the Ensign 965 drill rig, one of the most powerful land rigs in Australia with a hook load of 700,000 pounds and over 2,000 horse power of pumping capacity, had begun arriving at the Klebb Field and mobilisation was on track for the February 14 spud.

If the company can get coal seam gas to flow at these depths they may well spark something of a mini gold rush as others seek to do the same.

With a possible resource of 11 tcf the prize, Strike will have unlocked one of the most significant on shore gas resources in recent times in Australia if they can pull this off.