ASX-listed junior explorer, Strickland Metals has picked up a strategic slice of the revered Yandal greenstone belt in WA that complements its flagship Horse Well gold project immediately to the north. The Perth-based company acquired a 75 per cent interest in a cluster of exploration licences making up the Yandal East gold project from Renegade Exploration for a mix of shares and cash. 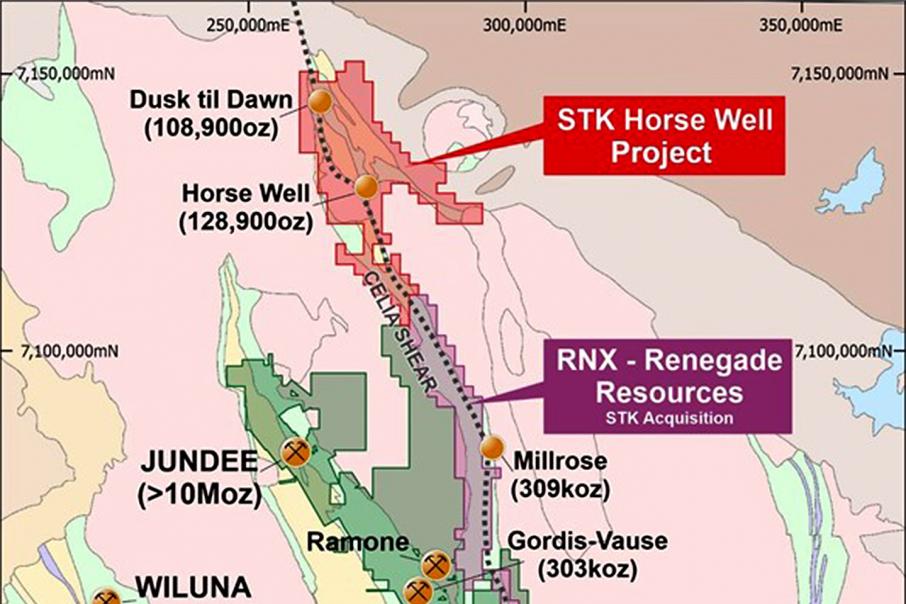 ASX-listed junior explorer, Strickland Metals has picked up a strategic slice of the revered Yandal greenstone belt in WA’s north-eastern Goldfields that complements its flagship Horse Well gold project immediately to the north. The Perth-based company acquired a 75 per cent interest in a cluster of exploration licences making up the Yandal East gold project from Renegade Exploration for a mix of shares and cash.

The deal extends Strickland’s enviable tenure of strike over the regionally significant auriferous Celia shear zone by a further 60km to more than 100km and consolidates its ground-holdings over the eastern flank of the Yandal greenstone belt.

Horse Well, which also straddles the shear zone, hosts an inferred resource of 5.72 million tonnes at an average grade of 1.4 grams per tonne gold for 257,000 ounces of contained gold dominated by the Dusk Til Dawn deposit and Horse prospects.

Strickland has just increased its ownership of Horse Well to 100 per cent after buying out joint venture partner, Silver Lake Resources’ 37 per cent stake in the asset for $1.75 million.

The project, which covers about 1,000 square kilometres in the northern portion of the fertile Yandal-Millrose greenstone terrane, lies about 50km north of Northern Star Resources’ 10-million-ounce-plus Jundee gold operation.

According to Strickland, Horse Well represents a “very substantial gold system”, particularly around the Big Daddy prospect and granite intrusives.

According to the company, the former Renegade landholdings have yet to be properly probed due to metal depletion in the weathering profile and the lack of multi-element data, rendering much of the historical shallow drilling ineffective.

Strickland says despite the region’s large gold endowment, the north-eastern flank of the belt – where the company now holds a prime position – is under-explored.

Strickland Metals Chief Executive Officer, Andrew Bray said: “We are very excited to have secured such a substantial footprint over one of WA’s premier greenstone belts. Of particular interest is the fact that this north-eastern flank of the Yandal belt is significantly under-explored, despite its resource endowment elsewhere and its regional geology.”

“After concluding the transaction with Renegade, we will have consolidated a tremendous tenure position with outstanding exploration upside. Planning is well under way for a major systematic drilling program across this highly prospective gold system. We are scheduling to commence drilling early in the September quarter.”

The company will issue 40 million new Strickland shares to Renegade for the Yandal East project acquisition.

Strickland will also pay Renegade $400,000 cash when the transaction has been squared away and an additional $400,000 on the six-month anniversary of completion.

According to Renegade, which now has a 0.5 per cent net smelter return over Yandal East, the “best mineralisation” in the Yandal East area typically occurs close to the contact between the eastern granite and greenstone.

The contact has not been well defined and interpretation is often hampered by lack of outcrop and alteration.

Strickland recently ushered in a revamped board and new management, with a strong cast of experienced campaigners entering the fold including Andrew Bray taking up the CEO’s post and Anthony McClure being appointed Non-Executive Chairman.

Mark Cossom, Trent Franklin and David Morgan join Paul Skinner as Non-Executive Directors, Sleiman Majdoub moves into the Company Secretary’s chair and Peter Langworthy has been made a Technical Adviser.

Since the restructure, the company has focused on technical evaluation of Horse Well and laying the groundwork for designing the forthcoming exploration programs.

Apart from the 309,000-ounce Millrose gold deposit perched on the north-eastern flank, the bulk of the 100km-plus of strike length along the Yandal-Millrose belt has been only lightly tested.

The $25m market-cap company sees this as providing an exceptional exploration opportunity on one of WA’s venerated greenstone belts. Its geological review is well advanced.