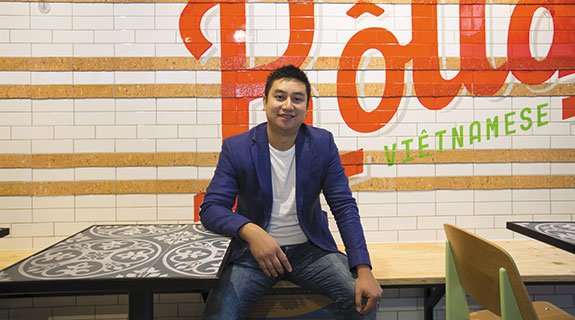 Rolld aims to open six or seven outlets over the next two years in Perth, with the five-year plan to add 20 WA stores to its network of 26 in Victoria, New South Wales, Queensland and the ACT.

The chain started just three years ago as a small eatery in Melbourne’s CBD, but co-founder Bao Hoang told Business News it wasn’t long before he and his partners were discussing expansion.

“We really wanted to expose Vietnamese street food to the Australian market, and I feel like there’s a huge opportunity from a healthy perspective as well,” Mr Hoang said.

“Vietnamese food is essentially healthy at its essence, so that’s the reason we thought we’d give it a go.”

The menu, according to Mr Hoang, is based on traditional Vietnamese street food items commonly found on the streets of Hanoi or any other large city.

“What we’ve done is taken family recipes, a lot of the recipes on the menu are my mum’s recipes,” Mr Hoang said.

“We’ve also adapted the menu to add items we thought would be more conducive to the Australian market.

“I think that’s been a big factor in our business.”

Mr Hoang said the franchise had built its reach initially by launching in CBDs in the eastern states, before moving out to major shopping centres in the suburbs.

“Launching in the CBD, we’ve found, is a great way to expose the product to people that haven’t tried Vietnamese food before,” he said.

“One of our big challenges is to educate the market; a large proportion of people have never had Vietnamese.

“The CBD lets us expose to the brand thousands of people working here.”

Rolld’s entrance to Perth follows an influx of eastern states hospitality operators during the past five years, as reported last month by Business News.

Since 2010, 15 franchises have opened in Perth, bringing cuisines such as Mexican, Portuguese, German and French, among others.

Street food is also growing in popularity in Perth, following the success of the Twilight Hawkers Markets and the Night Noodle Markets, the City of Perth’s Food Truck Rumble, and a host of other suburban food markets.

But Mr Hoang said Rolld was not just about following a short-lived trend.

“We’re trying to build a business that has longevity, which is authentic family food, but it’s also commercial,” he said.