Stokes nominated for Australian of the Year 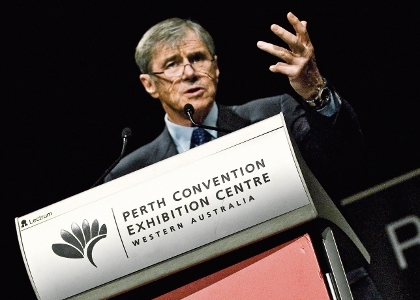 Perth media mogul Kerry Stokes has been announced as Western Australia's candidate for the 2013 Australian of the Year awards.

The top honour will be awarded to one of the nine state and territory nominees in Canberra on Friday.

The Victorian nominee, Mr Mitchell, has donated more than $10 million to projects linked to health, education and the arts.

The founder of Mitchell & Partners overcame many personal hurdles including obesity and alcoholism and now dedicates his time to countless philanthropic causes.

She says being named Australian of the Year would mean a big step forward for skin cancer research in Australia.

Adelaide mother Sonya Ryan has made her mark as an internet safety campaigner following the murder of her 15-year-old daughter in 2007 at the hands of a cyber pedophile.

Ms Ryan established the Carly Ryan Foundation, which spreads the message about internet safety to schools and universities, and wants the subject to be made a compulsory part of the school curriculum.

ACT finalist Tom Calma is recognised for his inspirational work over four decades for the empowerment of all Australians, in particular indigenous people.

He formerly served as the Aboriginal and Torres Strait Islander Social Justice Commissioner and is co-chair of Reconciliation Australia.

Dr Calma's landmark 2005 report calling for the 17-year life expectancy gap between indigenous and non-indigenous people to be closed within a generation laid the groundwork for the Close the Gap campaign.

Andrew Hughes won Tasmania's nomination for his work bringing the wilderness into classrooms.

Known as an adventure teacher, he has developed primary and high school programs that link curriculum studies with wilderness adventures.

The NT's co-nominees, Mr Grose and Mr Hohnen, are the founders and directors of a Darwin-based record label that supports indigenous musicians in Tasmania, Tiwi Islands and Timor-Leste.

Over the past 14 years, they have nurtured a new generation and genre of performers through business development all the way to the world stage, connecting remote communities with metropolitan music listeners.