When the chief executive of an ASX-listed company is getting paid an annual salary of only $110,000, it’s a sure sign that money is tight. But not for all, as Business News' quarterly CEO salary survey reveals. 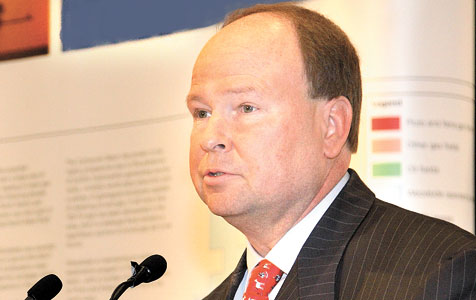 When the chief executive of an ASX-listed company is getting paid an annual salary of only $110,000, it’s a sure sign that money is tight.

And when chief executives of well-established gold miners take 15 or 25 per cent pay cuts, it’s another indication that conditions are tough.

Business News’ quarterly survey ranks the remuneration paid to 25 newly appointed chief executives, or those who have renegotiated their salary package.

The survey features a number of chief executives who have accepted pay cuts.

Several companies have also brought in new chief executives on lower salaries than their predecessors.

However others have maintained historic salary packages, despite the downturn in the market and their businesses struggling to perform.

Most notably, two new appointments show that Kerry Stokes likes to look after his top staff, even in these straitened times.

The Stokes-chaired Seven Group Holdings has appointed Don Voelte as its chief executive, on an annual salary of $3.2 million; that’s higher than the chief executives at BHP Billiton and Rio Tinto are getting paid.

Another Stokes-chaired company, Seven West Media, has appointed former Perth journalist Tim Worner as chief executive on a base salary of $2.6 million.

These packages put Messrs Voelte and Worner way ahead of other chief executives who have taken up their role during the past three months.

Among those cutting salaries is gold miner Troy Resources. Chief executive Paul Benson has taken a 25 per cent cut for the 2014 financial year (taking his base salary to $405,000), while directors and other executives have taken a 10 per cent cut.

Similarly, Africa-focused gold miner Perseus Mining has announced that its directors’ salaries will be cut by 15 per cent, dropping chief executive Jeff Quarteraine’s salary to about $722,500.

Uranium developer Deep Yellow cut executive salaries and board fees by 10 per cent in July 2012, and this month announced a further 5 per cent cut.

Aspen Group, Terramin Australia and Rumble Resources are companies that have used the appointment of new chief executives to ratchet down salary levels.

Aspen, which has been selling assets as part of a long-running restructuring, recruited former Valad Property Group executive Clem Salwin in June.

Zinc miner Terramin hired its former chief financial officer Martin Janes as its new CEO. His $350,000 salary package compares to the $400,000 paid to his predecessor.

Four Western Australian companies have appointed chief executives on salary packages well below $200,000, something not commonly seen in this market for many years.

EzeATM has appointed former non-executive director Doug Rose on a base salary of $150,000, well below the $250,000 paid to his predecessor Todd Zani, who was recently ousted by the remaining board members.

Junior explorer Rumble Resources, which had a market cap last week of just $2.1 million, was even more frugal.

It has promoted general manager Shane Sikora to the chief executive role, on a salary of $110,000.

In marked contrast to these companies, some businesses have maintained salaries at boom-time levels.

A notable example is Bauxite Resources, a company that has the backing of China’s Yankuang Corporation for its ambitious plans to build bauxite mines and an alumina refinery in the state’s South West.

It hired former Sundance Resources CFO Peter Canterbury this year on the same $450,000 base salary as his predecessor Scott Donaldson – though Mr Donaldson also got a motor vehicle allowance of $20,000 per year.

The main difference was in their long-term incentive schemes.

Mr Donaldson’s package included 3 million options exercisable at 45 cents per share; however the share price was never remotely near that level during his two-year tenure.

The placement will give VDM a much-needed cash injection and deliver a 42 per cent shareholding to Dr Hua, who also plans to take the reins as managing director.

The deal includes Dr Hua being employed on the same terms as current managing director Andrew Broad, including a $625,000 base salary.

To put this in context, VDM is currently valued by the market at just $17 million, whereas GR Engineering, which has a market cap nearly four times higher at $66 million, has just appointed Geoff Jones as its new managing director on a base salary of $434,000.

The salary packages featured in this survey highlight a pattern in which highly paid chief executives are offered much more upside potential through incentive schemes.

For instance, Aspen’s Mr Salwin and VDM’s Dr Hua will be able to earn up to 75 per cent of their base salary through an annual bonus.

But for Mr Voelte, the wording is crucially different. He will get an annual bonus equal to 75 per cent of his base salary if his performance is “on target”. The same applies to his long-term incentive scheme.

This means that if Mr Voelte’s performance is “on target”, his total remuneration, including equity incentives, will be $7 million.

If his performance exceeds target, he will qualify for an even larger bonus, though this was not specified.

Seven Group Holdings is not unique in this regard.

At BHP Billiton, for instance, new chief executive Andrew Mackenzie will qualify for a short-term bonus equal to 160 per cent of his base salary (of $US1.7 million) if he performs “at the target level”.

His “maximum” short-term bonus is actually set at 240 per cent of his base salary.