Hospitality entrepreneur has high hopes for the industry in Perth, after receiving 70 per cent of its new restaurant crowdfunding target in the first month. 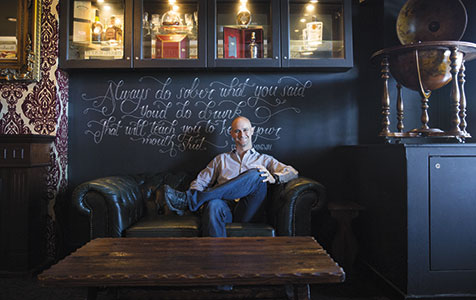 ON THE GO: Daniel Sterpini has no time for reflection on a busy 2014, with new ventures planned and under way. Photo: Attila Csaszar

Co-owner of Perth small bar The Classroom and 2014 Business News 40under40 winner, Daniel Sterpini, has had a busy 12 months.

Not only has he reached a personal milestone in turning 40 years of age, he also celebrated the birth of his third child.

It’s been all go at the Charles Street venue in North Perth, too, with an Australian-first restaurant almost ready to open and the catering side of the business, Cocktail Gastronomy, soon to receive a liquor licence enabling it to supply large external events.

Mr Sterpini said the business had benefitted from the momentum off the back of his 40under40 win in March.

And the awards have kept coming, with The Classroom last month named Australia’s best metropolitan bar for presentation and service at the national Australian Hotels Association awards for excellence.

The owners of Cocktail Gastronomy launched The Classroom in 2012, and last month announced a new crowd-funded campaign for a second venue in Northbridge, due to be open by late January.

Lucky Chan’s Laundry and Noodlebar has already received funding pledges of more than $70,000 towards its total campaign to raise $100,000.

With the new restaurant due to open by late January 2015, Mr Sterpini isn’t slowing down, with another two Australian-first business models in the pipeline.

“Perth has an appetite for something new, the busiest places are usually the newest ones,” he said.

He said people wanting to get started in the hospitality industry should look to the needs and demands of the clientele and service that, rather than their own personal desires for a venue.

“The hospitality industry can be quite ruthless and cut-throat,” Mr Sterpini said.

“Just because you might have the funds to set up a business, doesn’t mean it’s going to work, regardless of the funds you put in to make the business look attractive.

“You have to look at your demographic and your clientele and what their needs and demands are and service that, not your own personal desire to open up a venue.”

Fellow 40under40 award winner, Anthony Janssen in 2011, has also had continued success in the hospitality industry, now operating two venues in the South West, including the award winning Morries Anytime small bar and restaurant in Margaret River.

Another 2011 winner, Sean Reid, is also moving onto bigger challenges, utilising skills honed as managing director of The Breakwater in Hillarys to launch Scarborough’s Matisse Beach Club earlier this year.