State turns to quay for returns

The Barnett government is understood to have picked a winner for the first two lots at Elizabeth Quay, pushing the button for the second land sale at the 10-hectare riverside precinct. 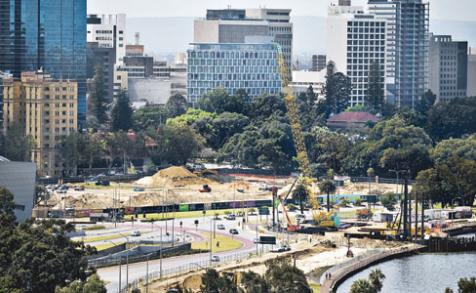 The Barnett government is understood to have picked a winner for the first two lots at Elizabeth Quay, pushing the button for the second land sale at the 10-hectare riverside precinct.

The launch of the expression-of-interest campaign for lots five and six coincides with confirmation by sources close to the deal that Hong Kong headquartered Far East Consortium has won the rights to develop the hotel and apartment plots in the high-profile project.

It’s understood the Australian operation of the Far East Consortium joined forces with hotel operator Ritz Carlton to pitch for the first lots at Elizabeth Quay and fight off competing bids from a syndicate led by Brookfield Multiplex, Frasers and Woods Bagot, and a third group made up of Leighton in partnership with Sheraton and Hassell.

Leighton Contractors is already closely involved in the project after winning a $200 million contract with Broad Construction Services to build the new inlet along with roads, parks and pathways.

The Far East Consortium is behind a number of significant apartment projects in Melbourne, including the soaring Upper West Side development, which will support up to 2,600 apartments over four towers in central Melbourne.

The state government was expected to unveil the winning bidder for the first parcel of land at Elizabeth Quay – lots nine and 10 – in July, but despite talk the Metropolitan Redevelopment Authority was in exclusive talks with one party there has not been any announcement.

Delays in concluding the sale of the first lots has not discouraged the state government from launching the latest sales campaign – an expression of interest campaign for two mixed-use plots at the top of the inlet.

These land sales are crucial to the government’s bid to recover its $440 million investment in Elizabeth Quay and deflect some of the criticism that has flared up since Western Australia was stripped of its AAA credit rating earlier this month.

It’s a believed the government is seeking as much as $40 million for this latest land release.

At this price, one development sector executive said the office tenants would have to pay as much as $1,000 per square metre to deliver a return for the developer.

Premium rents in Perth’s CBD are currently running closer to $900/sqm, and Shell’s commitment to a new tower in the City Link has rewritten the boundaries of the city’s office zone.

Views might command a premium for residential units, but historically Perth office tenants have not been willing to pay top dollar for a picturesque outlook, one analyst said.

The other major hurdle is the lack of big space users in the market for a new office.

Rio Tinto is thought to be one potential contender but signing up to a shiny new office tower may not be a palatable option for management when the company has just shed hundreds of jobs as part of a major restructure.

All this scepticism could be swept aside if Chevron’s alleged enthusiasm for building its headquarters at the quay turns out to be more than mere speculation.

The US energy giant has consistently been linked with Elizabeth Quay, but the extension of its lease at QV.1 until 2023 appeared to pour cold water on this idea.

Speculation has strengthened in the past month, and market watchers suggest Chevron is in direct negotiations with the MRA to secure a site for its Perth base.

The latest Elizabeth Quay land offering is referred to as lots five and six and has been slated for a blend of office, residential and hospitality uses.

The 7,221sqm land parcel is situated on the northern edge of the inlet and the state government planning authority for the project, the MRA, has determined it can support a tower of up to 30 storeys.

The ground level will have a blend of retail and dining while the upper storeys could be developed with office, residential, hotel or serviced apartments.

If the state government sticks to its timetable, the successful bidder for this latest land release will be announced by June next year.

It’s a lengthy process, which raises some questions about exactly what Planning Minister John Day meant last week when he said that people would be able to “interact” with the quay by spring 2015.