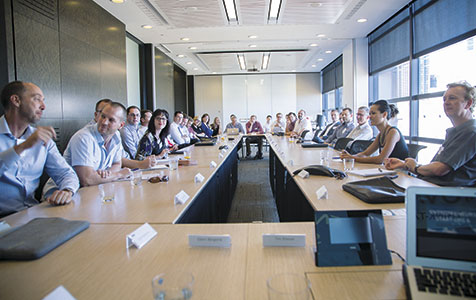 The buzz around Perth’s start-up community is noticeable. Just as everyone seemed to have a ‘dotcom’ idea back in the late 1990s, these days everyone seems to have an ‘app’ idea and, increasingly, a ‘wearable’ idea.

No doubt many of these ideas will not see the light of day and fewer will become sustainable or even successful businesses.

However, if the economy is ever to discover the rivers of digital gold that lie beneath the surface and take full advantage of the new economy, then the level of funding will need to increase significantly from its present level.

As last year’s City of Perth Startup Ecosystem report highlighted, the amount of private funding on tech ventures in Perth is running at only $3 per capita. $6 if you count government money.

Collectively, Australians spend much more than this per person every year betting on the Melbourne Cup. In other start-up cities, start-up investment runs at $500 per capita (Denver, Colorado) or even $1,300 (Silicon Valley).

As Sam Birmingham, of Perth StartUp Weekend, told Business News: “We have to be able to throw enough darts at the target to see which of these will come off.”

One of the mainstays of start-up funding over the past few years has been the Commercialisation Australia grants.

Up to 2013, 62 WA companies have collectively been handed $32 million in funds, with grants ranging from $50,000 to $2 million. At an average investment of half a million dollars per company, this has underpinned and supported extra private money.

Over the five-year period 2008-13, $12.5 million of the federally funded Commercialisation Australia has been tied to additional angel (private) funding of $9.8 million to the same companies.

It is therefore bad news that, as of March 2014, the Commercialisation Australia scheme is not accepting new applications or requests for funding extensions.

In fact, all federal discretionary grant programs are on hold, which affects a further 100 business grants. The only schemes in operation would appear to be the research and development tax rebate and some export marketing grants.

Federal grants are not for everyone. The application can take many months and be fairly convoluted. Often, start-ups hurrying to take advantage of a window of opportunity have to be nimble and simply don’t have the time to jump through the necessary hoops.

Despite this, grants can act as a useful launching pad for hundreds of start-ups and provide ‘multiplier’ effects.

Chief executive officer of the Australian Information Industry Association, Suzanne Campbell, argued in an open letter to Industry Minister Ian MacFarlane that “the leverage effect generated by the program and, in particular, how Commercialisation Australia has provided critical mass deal flow to both domestic and international investors looking for early-stage opportunities is clear”.

“Without the support of Commercialisation Australia, companies that have attracted funding would not have been able to commercialise their intellectual property and attract investment,” she said.

There is now serious doubt whether Commercialisation Australia will continue to exist in its current form, if at all.

It’s not just affecting companies that were about to lodge grant applications. Some companies that submitted applications in October last year and were considered at the various Commercialisation Australia board meetings in December and February were still waiting to be advised, some 160 days after lodging.

The Commercialisation Australia charter states in its customer information guide that applicants will know within 75 days the outcomes of their submissions. This is clearly not happening.

Every business that is going through the grant-funding process seems to be in limbo.

“We have been severely hampered by the delay in receiving a response … and this has resulted in lost opportunities and credibility with overseas clientele. Additionally, we have lost export earnings for Australia,” Mr Gleeson said.

Anne Furey, from GrantSmart, which guides companies through the funding process, has secured more than $20 million in funding for clients.

“My perspective on the situation is that this is not an uncommon action for new governments as they approach the first budget,” Ms Furey said.

“Kevin Rudd did something similar, although he waited until the budget was handed down.

“The incoming government will have their own priorities and policies and will deliver their own grant programs to support these and I expect we will get an indication of the types of grants that will be available when the budget is handed down in May.

“Hopefully, the government will still honour grant applications that are already in the system.”

The Commercialisation Australia funding pause comes as private funds dry up and the number of start-ups seeking capital is increasing.

Of all the seven Perth Founder Institute companies that graduated last year, not one has yet secured a major funding deal. Of the 750 members of Perth’s most supported start-up event, Morning StartUp, no one has reported any significant deals.

One notable disappointment was Filter Squad’s Discovr app, which managed 3 million downloads but folded before Christmas. It had secured a $1.1 million investment from Perth-based VC Yuuwa Capital in 2011.

While Perth has seen a proliferation of start-up events, such as Start-Up Weekend, which held its fourth iteration in February, nearly all participants seem to go back to their day job once the weekend is over.

One exception is the travel app Triplifier, the original concept that was put together over 48 hours during StartUp Weekend #1 in November 2012.

Melbourne venture capitalist Rick Baker argued at the OzApp Awards, held in February, that Australia (and WA) suffered from a large “funding gap”.

While seed capital could be found relatively easily (“anyone who cannot go out and get some angel funding is probably not trying hard enough”), Mr Baker said the point at which business angels stopped investing ($25,000 or $50,000 for most) was well below the point at which formal venture capitalists start ($500,000 or $1 million or more) or a back-door listing becomes possible (several million dollars).

This has brought the focus on to the role of accelerator programs, which enable founders with an early-stage venture to enroll in a full-time three-month course and makes them ‘investor ready’.

In return for some equity funding, the founders can quit their day job and make the decision to ‘go for it’.

The rise of the accelerator?

Curtin University (with the assistance of Google Australia) set up the Incubate mini-accelerator program earlier this year, where four companies won the chance to have $5,000 of non-equity money to attend the program.

They went on to pitch their ideas in the eastern states, with the hope of gaining the attention of serious investors.

In one development, Andy Lamb, of Atomic Sky, has just announced the opening of another co-working space, Tech Hub, in Northbridge.

This adds to the spaces already in operation at Spacecubed on St Georges Terrace and Synch Labs in Leederville. Mr Lamb and his team also take investments in some of the early-stage ventures they like.

Whereas other major Australian capitals have all established at least one fully fledged accelerator program, there is yet to be one set up in Perth.

Sydney has at least four, including Telstra’s muru-D, Startmate, Blue Chilli and Slingshot. Muru-D’s successful applicants each receive $40,000 in funding in return for a 6 per cent stake and have to relocate to Sydney to participate. The first 10 applicants were chosen in February and are now midway through their first program.

“Setting up a bona fide accelerator in Perth would be fantastic – it would de-risk things a great deal for all concerned,” said Sam Birmingham, who also works for Sydney-based Pollenizer, which spun out the hugely successful Spreets for $40 million three years ago. “No-one wants to look silly when they invest in a start-up. I believe this fear is holding a lot of potential investors back.”

All these issues and more were discussed at a recent meeting of the major players in Perth’s start-up scene, hosted by KPMG. Apart from ‘mentor fatigue’ (the same few people providing all the help and coordination around start-up events), the main problems highlighted were the lack of understanding from start-ups as to what investors were looking for and expected, a general misunderstanding or fearfulness of the early-stage tech sector to those with money and too few Perth tech start-up success stories.

At least the main participants are talking, and perhaps that collaboration will lead to something.

For now though, much of the start-up community seems to be waiting for something to happen.

Charlie Gunningham is an internet entrepreneur and GM of Digital at Business News.
Twitter: @chazgunningham

2014 – Digital agency MD Tony Loxton wins Business News 40under40 First Amongst Equals. Nearly a quarter of 40under40 winners are from technology companies.