Neometals’ big titanium-vanadium deposit at Barrambie in the northern Yilgarn is coming into its own thanks to surging prices for its two major products, titanium and vanadium. Favourable markets are creating a multitude of development options for Neometals at the project, with the company stepping up work on everything from direct shipping to downstream processing options. 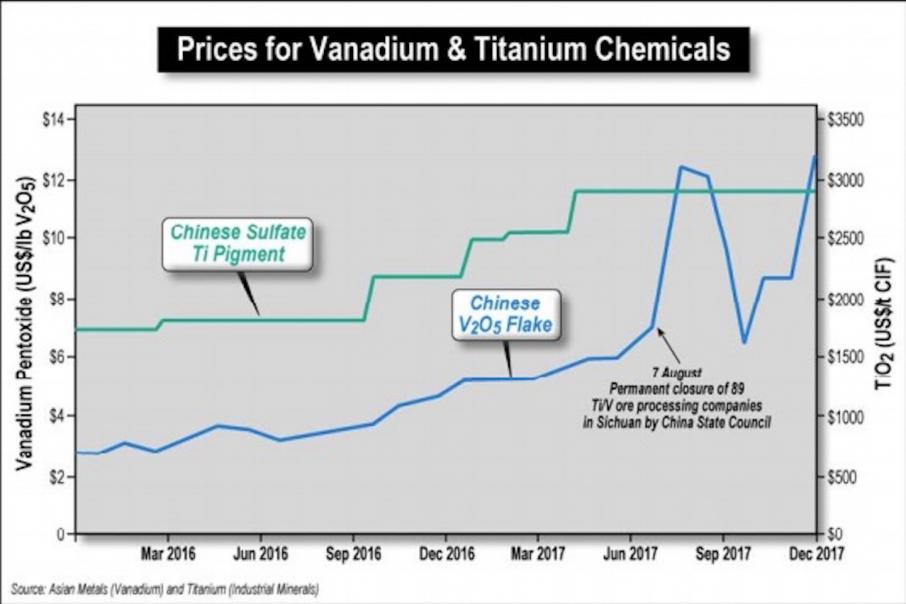 The stars are aligning for Neometals’ Barrambie deposit, with prices surging for both titanium and vanadium, the two key minerals to be produced at the West Australian project.

In an update to the ASX this week, Neometals reported that prices for vanadium and titanium were approaching five-year highs due to growing demand for the metals in energy storage and pigment markets.

The double-headed price rise is auspicious for Barrambie, which is not only one the highest-grade hard rock titanium deposits in the world, but also hosts high-grade vanadium.

Neometals read the tea leaves last year and began stepping up its efforts to bring Barrambie into production as the company’s next big project following the significant success of the Mt Marion lithium mine.

The high grade of the Barrambie deposit creates many development options, ranging from direct shipping of ore through to downstream processing onsite using Neometals a patented process known as “Neomet”.

In this week’s update, the company said it was working on multiple fronts to determine the best development route.

In the December quarter, beneficiation testwork with a magnetic separator was completed in Perth on 4.9 tonnes of Barrambie ore. The result was a sizeable uplift in titanium dioxide grades from 28.2% to 36.1%, with a similar improvement for vanadium pentoxide.

This newly produced concentrate will be shipped to Neometals' pilot plant facility in Montreal, Canada, for testing later this year.

In the meantime, a direct shipping ore operation is being evaluated by sending a 50,000-tonne bulk sample to a titanium processor in China. Mining approvals have been granted and consultants are preparing costings for a DSO operation.

Neometals Managing Director, Chris Reed, said: “With titanium and vanadium prices at near five-year highs and the recent additions to the executive team, we are accelerating technical and commercial activities for Barrambie. With the natural advantages of the Barrambie resource, we are confident of finding the best development option.”