ASX listed financial payments player Stargroup’s extraordinary run of revenue growth has continued, with the company delivering its 12th consecutive quarter of record revenue after just two of the three months in the December quarter. The company posted a 299% revenue increase compared to the same time last year with the increase led by the ATM division. 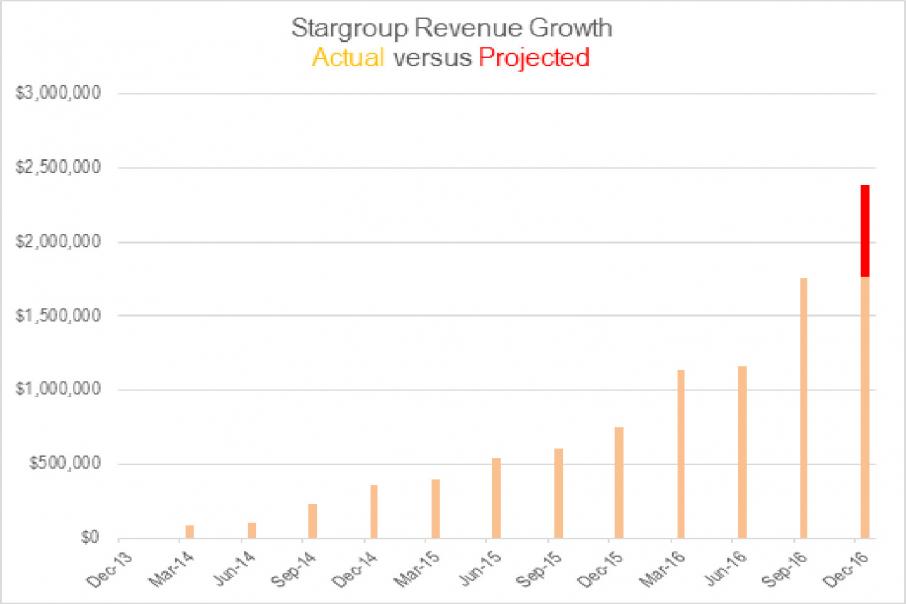 ASX listed financial payments player Stargroup’s extraordinary run of revenue growth has continued, with the company delivering its 12th consecutive quarter of record revenue after just two of the three months in the December quarter.

In an update to shareholders on Monday, the Perth-based company announced the continuation of its staggering run of quarterly revenue growth with revenues in October and November already outstripping revenues from July, August and September.

Driven by further organic growth, the company projected that final group revenues for the December quarter would beat the previous quarterly record by 30%, once the month of December was factored it.

In the update, Stargroup, who have over 350 Automatic teller Machines across Australia, also noted a whopping 299% increase in annual group revenues compared to last year and a 265% uplift in year-to-date ATM revenue, compared to the same time in 2015.

Stargroup CEO Todd Zani said: “Our group revenues in the last two months have already surpassed our prior quarterly revenues and this is obviously going to be another record quarter for the company, our 12th in a row,” he told the ASX.

“Further, we are already well on track for a 13th record quarter in the first quarter of next year based on our current contracted revenues in place.”

The December quarter record revenue result at Stargroup comes after a stunning September quarter, which featured 151% revenue growth on the previous year as the company experiences a standout 2016 calendar year.

Last month, Stargroup added to its transformational year by executing a hotly-anticipated asset sales agreement with high margin Australian ATM machine service provider Indue, a deal that will see Stargroup add $1.7m in EBITDA to their set of yearly accounts for an additional annual turnover of $4.1m.

Mr Zani added: “I am excited by the opportunities that will be available to the company and we look forward to the vertical integration of the Indue business into our group of companies … The projections outlined in our recent AGM to our shareholders in terms of our future revenues and EBITDA are well on track.”

Stargroup, which this year dual listed on the Frankfurt Stock Exchange, offers two major products, ATMs and EFTPOS terminals. It also has an 11 per cent interest in NeoICP Korea Inc, which builds ATMs and casino settlement solutions.