Staking a claim in the heart of the action

A new restaurant in Northbridge is serving up family fare. Russell Quinn reports. 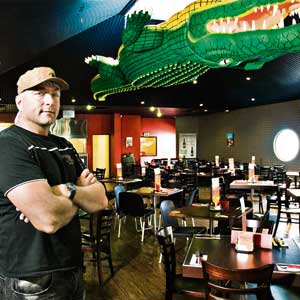 STEAK PLACE: Clint Grant has faith in Northbridge and believes his family friendly steakhouse restaurant will be a success. Photo: Grant Currall

CLINT Grant is determined not to let the frequent bad press about the Northbridge nightlife precinct affect his positive outlook for his new business, Outback Jack's Bar & Grill.

Part of a family focused national chain of steakhouses, the Northbridge outlet opened in late February, joining the maiden Western Australian franchise that's been open in Fremantle for about 18 months, as well as a Whitfords branch.

Mr Grant, an offshore rig-worker in the oil and gas sector for the past 17 years, didn't have any hospitality experience before taking up the franchising opportunity with Outback Jack's, but he did have something that's helped him immensely in running this style of restaurant.

"Being a man, a bloke, I love a steak, I love the meat," Mr Grant told Gusto.

"I'd been working overseas and was looking for something else to do and had a look around and this really appealed to me."

Claiming to have the largest selection of steaks in the world, Outback Jack's Bar & Grill state master franchisees and original owners of the Fremantle outlet, Peter and Julie Velzen, had earmarked Northbridge as a potential location before meeting Mr Grant, whom they immediately recognised as a hard worker.

"A lot of people are interested to be a restaurateur but do not really understand what it involves, so we want to make sure everyone who comes into the business has a true idea of what goes on," Mr Velzen says.

During time off the rigs over the last year, Mr Grant worked in the Fremantle restaurant getting a proper feel for the business.

"My two favourite positions are either at the bar or on the meat counter, I suppose being a bloke it goes hand in hand, but that's what I enjoy," Mr Grant says.

"On saying that, I also enjoy being front of house, meeting and greeting people and seating them, just getting to know them and having a chat."

Mrs Velzen says they only had a two-week window to conduct an extensive fit-out after purchasing the old Greek Taverna, a fixture on Northbridge's main entertainment strip for decades.

"New floors, new walls, all the furniture, the wine room was put in, the kitchen was opened up and the kids' room was constructed," she says.

"We deliberately made that kids' room the biggest in Perth."

Mr Grant is optimistic about the future of his restaurant.

"It started really well, but has taken a little bit of a backwards step with all this bad publicity focusing on Northbridge, but it's gaining strength week to week," he says.

"And everything changes with time and I'm in it for the long run, not the short term, so I believe it will come of age."

Family favourites include specials where kids eat free on Tuesdays and Wednesdays before 7pm, all you can eat ribs and pasta on Mondays and a '1kg steak challenge'.