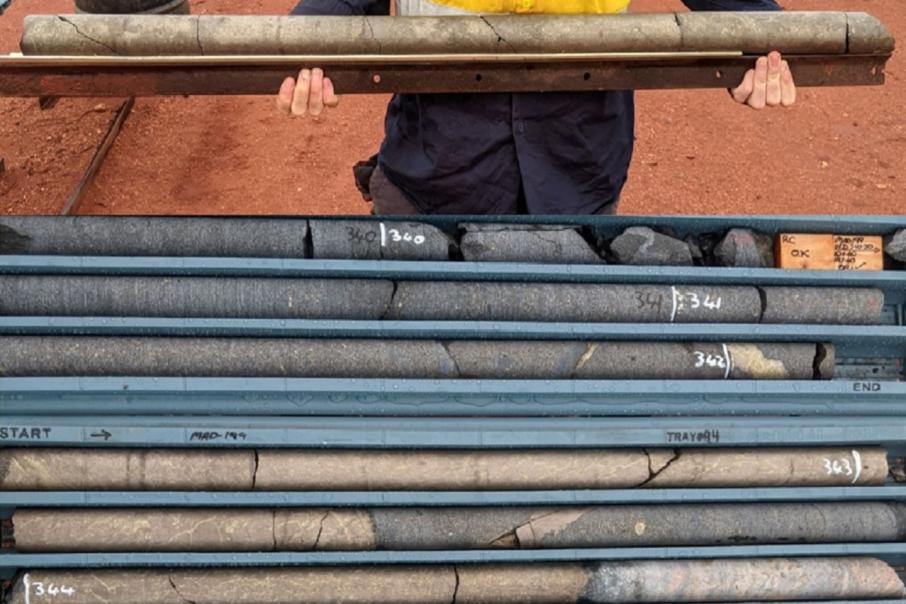 St George Geologists have described the almost 11m interval of mineralisation as a mixture of disseminated, massive, matrix, stringer and even ‘blebby’ sulphides littered with rock types that include metal-rich pentlandite, chalcopyrite and pyrrhotite.

Whilst St George was quick to remind the market that formal assay results are still pending, the company said the preliminary XRF numbers were a positive testament to its exploration methods.

The company’s hunt for buried nickel-copper sulphide treasures along its Cathedrals Belt nickel prospect was driven by downhole EM, or “DHEM” surveys recorded in its drill holes as it vectors in on a potentially deeply buried prize at Mt Alexander. The richest drill hole was targeting a strong, 19,320 Siemens electromagnetic, or “EM” conductor and the initial XRF results have not disappointed.

St George’s ongoing exploration at its Mt Alexander project is methodically working through a bevy of deep DHEM conductors, or “EM plates” over several kilometres of strike length of the Cathedrals Belt.

The company is chasing significant nickel-copper sulphides in the down-dip plunge direction of a large intrusive host-rock geological province.

St George still has two diamond rigs drilling deep across its ground chasing down a number of the DHEM hot spots which look to be lining up with a western extension of known massive nickel-copper sulphide mineralisation at Mt Alexander.

Management said it is continuing to log DHEM surveys in its deep holes to fine tune its future drill targets and effectively ‘join the dots’ in its deep structural mapping of the belt of massive sulphide mineralisation.

At around 340m deep, the massive sulphides tagged by the new discovery hole are the deepest yet penetrated along the Cathedrals Belt.  Another diamond drill hole is now on its way towards a target depth of 600m as it looks to test a broad EM anomaly at the company’s West End prospect, some 500m west of the new discovery drill hole location.

St George Mining Executive Chairman, John Prineas said:  “We are delighted to have made another high-grade discovery with MAD199 and believe there is excellent potential to discover further high-grade mineralisation in other underexplored areas of the Cathedrals Belt.”

“MAD199 has delivered an outstanding intersection of nickel-copper sulphides that may be indicating the presence of a large accumulation of mineralisation.”

“Importantly, there are multiple other EM conductors proximal to the MAD199 intersection – both up-dip and down-dip – which have yet to be tested. “

“Mineralisation of the kind that we have at Mt Alexander is very rare – the combination of high-grade nickel, copper, cobalt and platinum group metals is simply not seen anywhere else in Western Australia, or Australia for that matter.”

St George’s stock was up over 20 per cent in early trades after the announcement hit the streets as the electric vehicle and lithium bulls seek to get some early exposure to this rapidly developing nickel story given there is more nickel in a lithium battery than lithium.