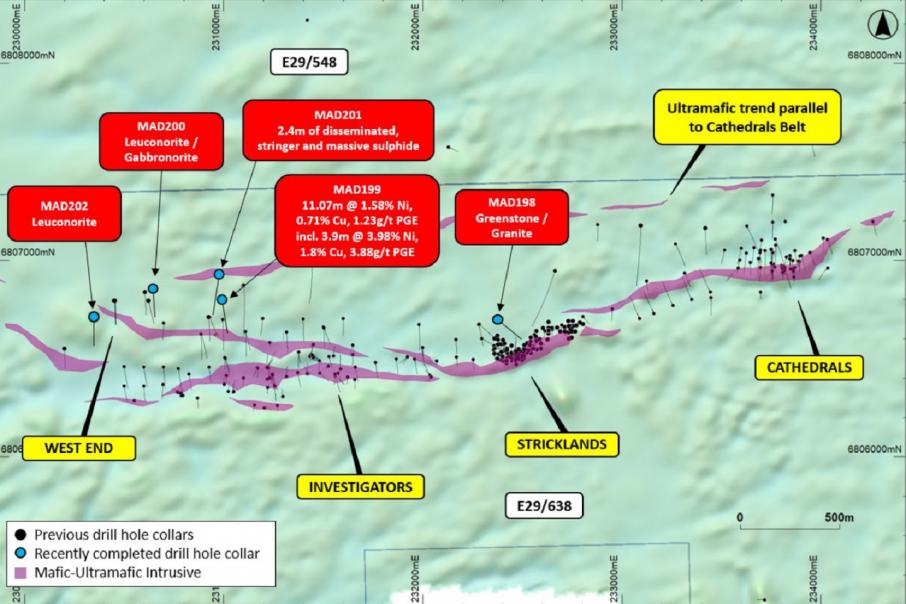 Assays are pending for another hole that is said to have picked up 2.4m of nickel-copper sulphides from 434.6m down-hole some 125m down-plunge of its newly reported intercept.

St George says assays for the down-plunge intersection are awaited. The sulphide mineralisation is open in all directions. Intriguingly, three strong electromagnetic conductors interpreted to have a massive sulphide source have been identified from the step-out hole.

The company has been drawing market attention with its drilling at Mt Alexander, with multiple high-grade intercepts reported at the Stricklands, Cathedrals and Investigators prospects over 6.5km of strike along the Cathedrals Belt.

Its newly reported intercept is below shallower mineralisation at Investigators where previous drilling returned numerous eye-catching results including 7.86m at 5.7 per cent nickel, 2.1 per cent copper, 0.18 per cent cobalt and 2.65 g/t PGE from 184m.

St George has launched into new geophysical surveys looking to pin-point targets for future resource drilling and testing at depth.

A deep ground-penetrating radar survey will look to generate a 3D model of shallow mineralisation to 150m depth while a seismic survey to produce a high-definition map to 2km depth is also on the cards for July.

Down-hole electromagnetic surveying is planned for a recently completed hole that intercepted intrusive rocks at the largely untested western end of the Cathedrals Belt.

St George is currently looking to secure a diamond rig to resume drilling at Mt Alexander.