St George Mining has ended 2017 with its share price on an upward trajectory on confirmation that its Mt Alexander project produced one of the most impressive base metals drill hits in the country this year. New assay results have revealed a 17 metre drill intersection grading 3.01% nickel, 1.31% copper, 0.13% cobalt and 1.68 g/t platinum group elements from a depth of just 37.45 metres. 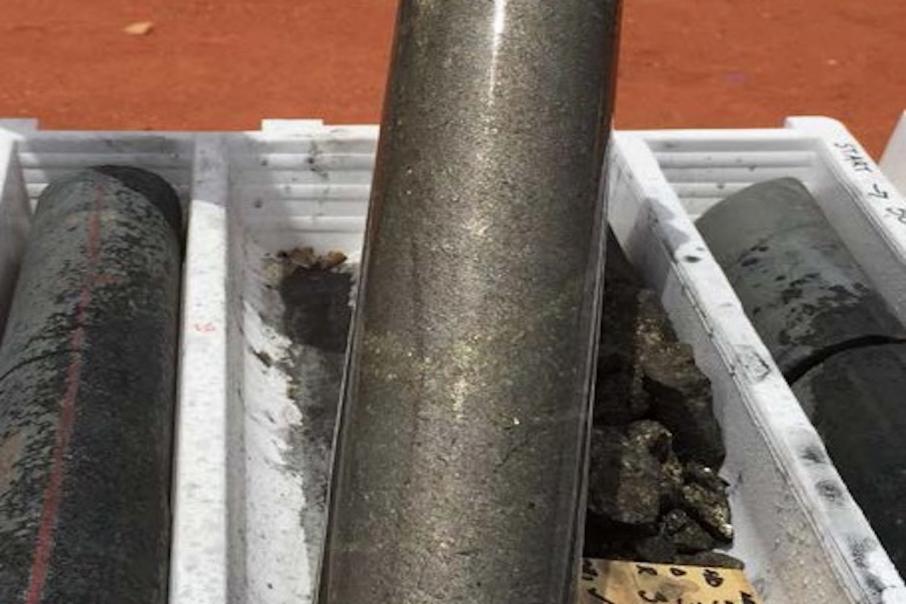 St George Mining shares jumped 57%  to a peak of 33c on Friday before closing out the week at 28c after the release of spectacular assay results from its 100%-owned Mt Alexander project, 120 km west of Leonora.

The impressive assay results had been well anticipated based on portable XRF readings of a massive sulphide drill core at the company’s Stricklands prospect.

Whilst the lab results that arrived this week were below those taken by the in-field XRF, they still caused an investor stampede into the stock.

St George Mining Executive Chairman, John Prineas, said: “We are very pleased to receive the laboratory assays for MAD71, which confirm this as an outstanding intersection of high-grade nickel-copper sulphides. The assays have also confirmed strong values for cobalt and PGEs, consistent with other high-grade mineralisation intersected at the Mt Alexander project.”

“Drilling continues to confirm extensions to the mineralised ultramafic at Stricklands and we are confident of intersecting further high-grade nickel-copper sulphides.”

St George is actively drilling for extensions of the thick, high-grade mineralisation at its discovery drill hole, which is just off centre from a strong electromagnetic anomaly that suggests a flat-lying ultramafic host rock.

Seven of the nine holes drilled to date in the Stricklands program have intersected nickel-copper mineralisation.

In a drilling update accompanying the release of the  assay results, St George said two new holes had been completed in the past week to the northwest, both of which intersected the targeted ultramafic mineralisation.

A third hole that was completed as part of a new eastern drill line hit 26.5 metres of ultramafic with disseminated nickel-copper sulphides. A further two holes are planned in the eastern area before the Christmas break to test for further extensions of mineralisation.

BHP discovered massive nickel-copper sulphides at Mt Alexander in 2008, however the project was under-explored until St George acquired it last year. Innovative geophysics have already generated rich rewards for the junior explorer and there is still much more potential in the project that is just getting started.

If St George do strike it rich at Mt Alexander, its proximity  to roads and critical mining infrastructure, including existing processing plants and the town of Leonora will remove most of the traditional barriers to production experienced by more stranded assets.