St George Mining has kicked off a swag of drilling at its flagship Mt Alexander project in Western Australia. Early-stage targets will be tested with a seven-hole program at the newly minted Carnac prospect and 20 high-priority infill holes will also be ploughed into St George’s Cathedrals JV with an eye to a potential resource estimate being produced. 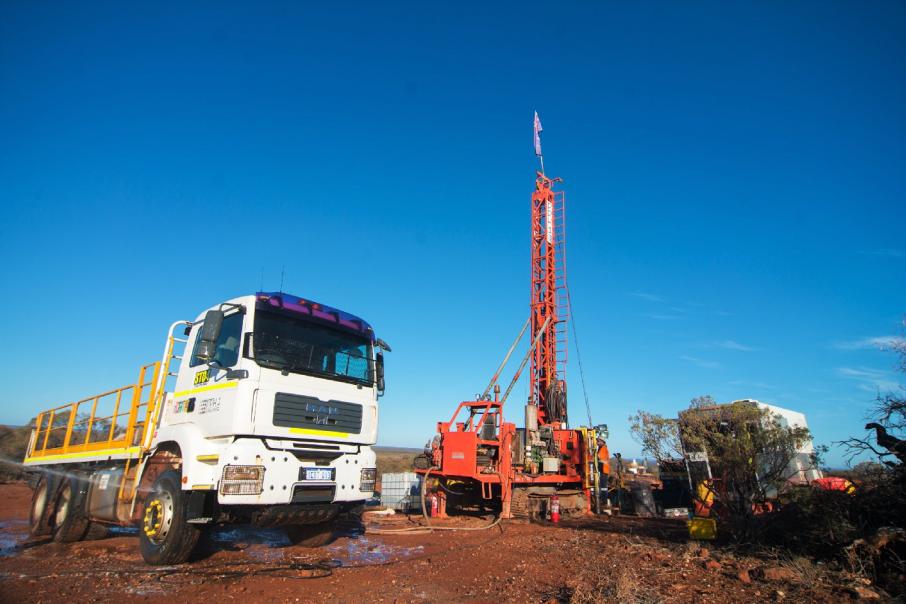 Drilling in the northern Goldfields of Western Australia. Credit: File

St George Mining has kicked off a swag of drilling at its flagship Mt Alexander project in Western Australia. Early-stage targets will be tested with a seven-hole program at the newly minted Carnac prospect and 20 high-priority infill holes will also be ploughed into St George’s Cathedrals JV with an eye to a potential resource estimate being produced.

The program will target nickel-copper anomalisms and look to confirm the nature of the host rocks.

The company has been quietly building a pipeline of nickel-copper sulphide targets located on its 100 per cent owned tenement package in the north-eastern Goldfields. The current exploration program includes additional drilling to target a strong magnetic anomaly in an under-explored area and historic soil anomalies over the eastern belt ultramafics further south.

The 20 high priority infill holes to be drilled at the Cathedrals prospect will test the continuity between zones of high-grade nickel-copper sulphides. The Cathedrals, Stricklands, Investigators and Radar nickel-copper-cobalt-PGE discoveries are located on a tenement that is subject of a joint venture between St George at 75 per cent and Western Areas Limited at 25 per cent.

St George Mining Executive Chairman, John Prineas said: “We have resumed drilling at Mt Alexander with an exciting pipeline of nickel-copper sulphide prospects. These early-stage targets have been generated by our ongoing exploration of the 100% St George-owned tenements at Mt Alexander”.

Systematic exploration with a soil survey targeting a strong magnetic feature came up trumps for St George at the newly-named Carnac prospect. Soil sampling produced anomalous nickel and copper along more than 1,600 metres of strike and the drill rigs now started to parade their way across the ground to test the emerging nickel sulphide target.

The Carnac trend is located about 14km north of the company’s Cathedral Belt nickel sulphide discoveries. The trend encompasses a linear magnetic feature which is parallel to the Cathedrals Belt, extending for more than 8km across the tenement. St George believes the magnetic trend may represent a mafic intrusive unit with potential to host nickel-copper sulphide mineralisation.

The maiden drill program at Carnac plans to punch out 700m across seven reverse circulation holes looking to confirm the encouraging hints from the soil geochemistry.

The drill rods will be kept spinning to test a “bulls-eye” geophysical anomaly from the airborne magnetic survey completed earlier in the year. The magnetic high, located halfway between the Carnac trend and Cathedral Belt, is unusual for the area and the company believes the feature may present a late-stage intrusion that could be prospective for base metals or gold.

St George continues to keep the pace up with further exploration drilling to take place at the Eastern Belt as it charges ahead in generating new prospects, this one named Jailbreak. An initial five-hole program will rack up another 750m to test the basal contact of two ultramafic units to be followed up with downhole EM surveys.

The Jailbreak prospect is hosted within a north-south oriented ultramafic belt, parallel to and east of the main Mt Alexander ultramafic belt. St George is targeting komatiitic ultramafic rocks and the nickel sulphides that are associated with their basal contacts.

The Cathedrals prospects continue to advance after recent thick high-grade intersections included 7.16m at 3.58 per cent nickel, 1.5 per cent copper, 0.12 per cent cobalt and 2.93 grams per tonne total platinum group elements from 57.8m downhole. Infill drilling at the joint ventured Cathedrals prospect will initially focus on twenty holes seeking extensions to known mineralisation and testing continuity between known zones. St George is powering ahead in the search for more high-grade intercepts with approval for another 62 infill holes included in the existing programme of works for Cathedrals.

Mr Prineas said: “the high-grade mineralisation at Cathedrals highlights how special Mt Alexander is. The combination of high-grade nickel, copper, cobalt and platinum group metals is simply not seen anywhere else in Australia.”

St George is wasting no time in accelerating its programme with the ongoing drilling at Cathedrals forming the basis of a potential resource estimation and management is now eyeing the opportunity to expand the footprint of mineralisation with a new discovery. No doubt the market will eagerly anticipate the swath of impending results.