St George Mining has opened up exploration on a second front and is now hunting giant copper deposits in one of WA’s most enigmatic mineral terranes – the Paterson province, home to a number of elephant sized mineral deposits. The company’s maiden drill program over its extensive tenure in the region has jagged copper sulphides in several drill holes triggering a move to deeper diamond drilling. 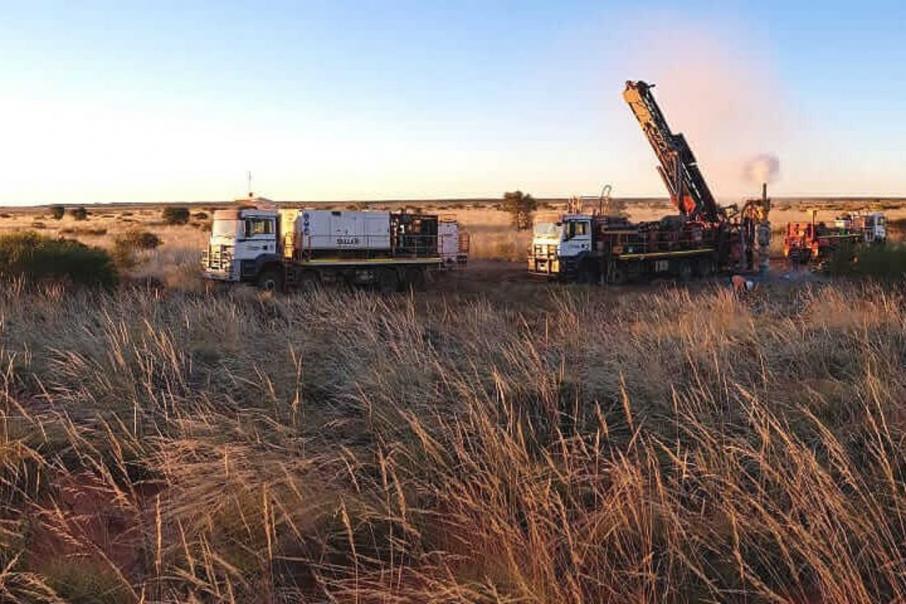 RC drilling in the Great Sandy Desert in the north of Western Australia. Credit: File/Antipa Minerals

St George Mining has opened up exploration on a second front and is now hunting giant copper deposits in one of WA’s most enigmatic mineral terranes – the Paterson province, home to a number of elephant sized mineral deposits. The company’s maiden drill program over its extensive tenure in the region has jagged copper sulphides in several drill holes triggering a move to deeper diamond drilling.

Rio Tinto has already shown the potential of the Patterson region, after it unearthed up the 503 million tonne Winu deposit which is rated as one of the largest copper discoveries of the last decade.

St George’s maiden drilling program over its own tenure has jagged copper sulphides in a number of drill holes, prompting a rapid escalation of the exploration program across the underexplored terrane.

The company recently completed a 35-hole reverse circulation drilling program in the Paterson, with exploration testing a sequence of metamorphosed sediments believed to be similar in nature to those hosting the Winu and Nifty copper deposits to the south.

Drilling tested key targets along more than 35 kilometres of strike, with geological logging noting the presence of intense alteration in addition to gossanous and copper sulphide mineralisation. Whilst the sampling from the program is now heading to the lab, the company is already planning follow up geophysical surveys and deeper diamond drilling in the weeks ahead.

“A diamond rig is scheduled to arrive at Paterson in mid-October, which gives us time to first complete an important airborne EM survey over the high-priority areas of interest. The data from this survey will assist to better define the copper and gold targets for the diamond drilling.

In recent years, St George’s exploration program has been focussed on its Mt Alexander nickel sulphide project in WA’s north-eastern Goldfields, however the company has managed to put its foot on a strategic ground holding in the resurgent Paterson province and looks to be making the most of its second exploration front.

The Paterson province lies immediately to the east of the famed Pilbara Craton and remains a richly endowed but poorly explored terrane due to the underlying geology being hidden by the sands of Great Sandy Desert. Despite this, the region has a reputation as being true “elephant country” having produced Newcrest’s massive Telfer gold mine, AIM-listed Greatland Gold’s 52 million tonne Havieron gold deposit and Rio Tinto’s recent Winu copper discovery.

St George’s tenure sits in the north of the province about 350km to the east of Port Hedland. The company owns two tenements in the region, which cover a combined 400 square kilometres of prospective stratigraphy – the recent drilling program tested the northern tenement. Interestingly, the company is keeping good company in the terrane with its neighbours including FMG and Rio Tinto.

With the maiden drilling program now completed, St George has already begun planning a return to the field. The presence of sulphides in the drilling has quickened a few pulses and prompted the company to engage a geophysical contractor to fly airborne electromagnetics over the tenure. The survey is designed to light up any massive sulphide mineralisation hiding beneath the desert sands. The company is also looking to have a diamond drill rig on the ground in October to test the potential of the recognised sulphide system at depth.

St George is now looking at a busy few months ahead as it races to beat the looming monsoonal rains that can sometimes penetrate south into the Paterson province. With two exploration fronts now in full swing  at both Mt Alexander and in the Paterson, pundits can expect a wealth of news flow from St George in the months ahead.