St George Mining’s deep drilling program at Mt Alexander in WA has continued to meet with success. Initial results from the Investigators and Cathedrals targets confirm the nickel-bearing Cathedrals structure extends to more than 500 metres depth, according to the company. Diamond drilling is continuing across the project area with a flow of results expected over the coming weeks. 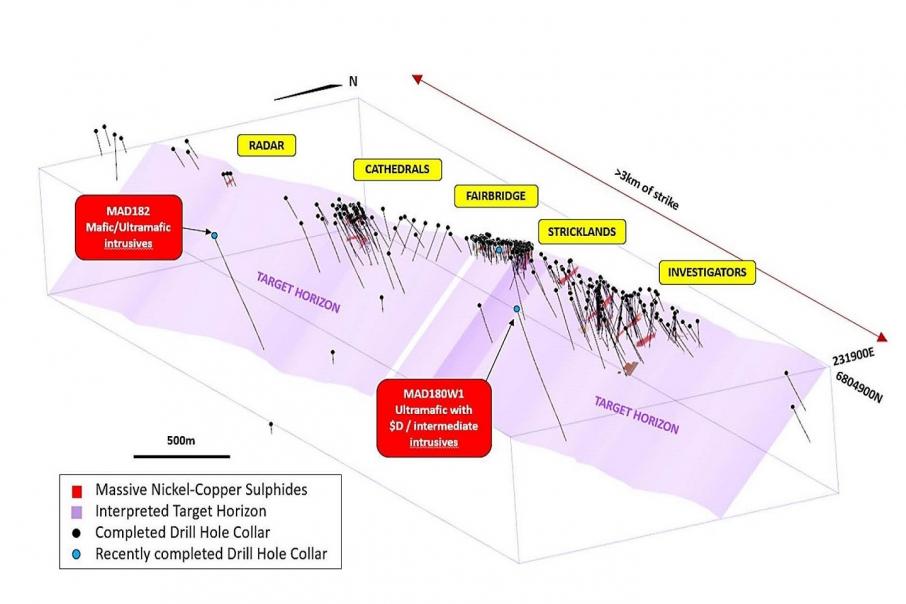 Orthographic view of the Cathedrals Belt targets and drilling.

St George Mining’s deep drilling program at Mt Alexander in WA has continued to meet with success. Initial results from the Investigators and Cathedrals targets confirm the nickel-bearing Cathedrals structure extends to more than 500 metres depth according to the company.

St George’s drilling program is going around the clock now with two rigs testing a series of deep EM targets along more than 4km of strike.

St George’s Mt Alexander nickel sulphide project is located in the eastern Goldfields of Western Australia, around 100 km west of Leonora. The project takes in a strategic land holding over the underexplored Cathedrals Belt, with St George’s discoveries strung out over more than 16 kilometres of strike which includes the Stricklands, Fairbridge, Radar and Fish Hook prospects.

The company’s recent program across the emerging nickel province has been a two-pronged attack, with the initial phase of work focusing on the resource drilling at the Stricklands deposit, the results of which will feed into the company’s evolving scoping study.

The second phase of drilling has targeted deeper electromagnetic targets beneath the Investigators, Cathedrals and Fairbridge discoveries.

Drilling at Cathedrals has now been completed with exploration at Investigators continuing over the coming weeks. Drill holes MAD 179, 180 and 182 across the two prospects have successfully intersected the sulphide-bearing Cathedrals Belt structure at depth.

Down-hole electromagnetics, or EM surveys now being undertaken down these three drill holes with preliminary results from MAD 179 showing the presence of two off-hole conductors detected at around 325 metres depth.

“Drilling at depth continues to intersect an extensive intrusive network that is the control on the high-grade nickel-copper sulphides at the Cathedrals Belt.”

“These drill results are positive for the potential presence of further mineralisation in the Cathedrals Belt mineral system.”

“The new conductors identified from the DHEM in MAD179 again shows the success that can come from systematic and methodical exploration. We are pleased with the strong progress made by the St George exploration team in better understanding the large and complex mineral system at Mt Alexander.”

Drilling of hole MAD 181 at Investigators is continuing with a planned target depth of 800 metres, whilst hole MAD 183 at Fairbridge will extend to a depth of 700 metres. Both drill holes are designed to test a large magnetotelluric targets deep in the bowels of the Cathedrals greenstone belt.

St George’s story at Mt Alexander continues to take shape and with a resource at Stricklands due in the coming weeks, all eyes will be on the project as results continue to flow through from this new nickel province in the heart of WA’s Eastern Goldfields.