St George Mining has come up trumps again at Mt Alexander in WA with two fresh downhole EM conductors turning up in the latest diamond drill hole at its aptly named West End prospect. Less than 1km north-west of known massive sulphides, the prospect presents a tantalising target for the John Prineas-led explorer in an area where there has been no previous drilling. 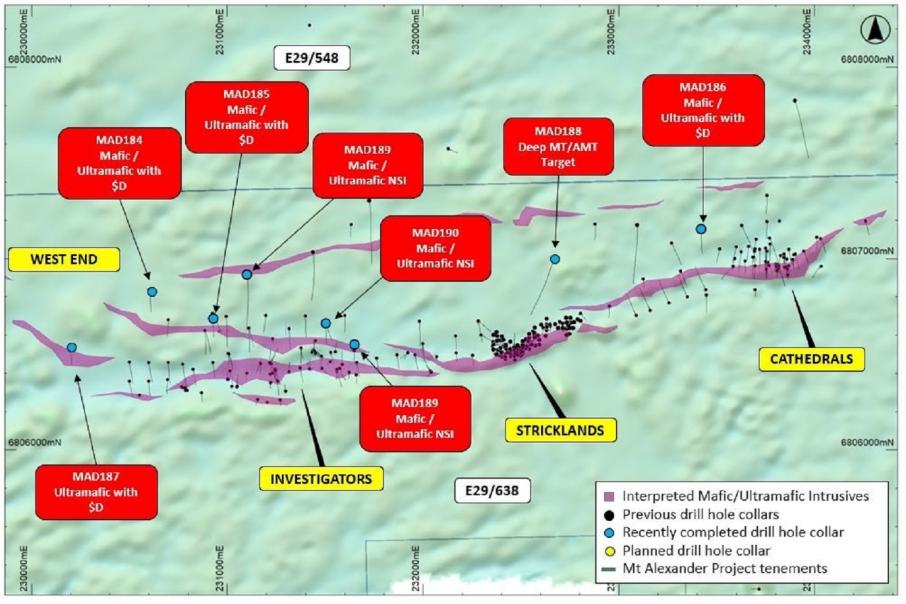 The Mt Alexander project, approximately 100km west of the mining centre of Leonora has produced an array of high-quality targets extending more than 16kms of strike across the nickeliferous Cathedrals Belt.

The new EM conductors were detected around 475m below surface in drill hole MAD184, in an area with no prior drilling, representing the deepest conductors ever identified and is less than 1km north-west of known massive sulphides in the Cathedrals Belt.

According to St George, previous drilling of other downhole EM conductors with similar characteristics in the Cathedrals Belt have turned out to be massive sulphides with high grades of nickel, copper, cobalt and platinum group metals.

MAD184 was completed to a downhole depth of 497.8m to test a broad single component EM anomaly identified by the surface survey carried out earlier this year.

Interestingly, the drill hole intersected a 23.2m thick mafic-ultramafic unit from 444.5m downhole which the company said was highly encouraging. These types of intrusive rocks are known to host massive sulphide deposits in other parts of the Cathedrals Belt.

Adding to St George’s recent run of success, drill hole MAD184 intersected 5m of disseminated and blebby nickel-copper sulphides from 462.7m downhole which can represent the halo around proximal massive sulphide mineralisation and support the potential for the presence of higher-grade mineralisation nearby.

“Our deep drill programme is delivering excellent results with thick intrusive-style rocks and nickel-copper sulphide mineralisation intersected at depths not previously explored.  The downhole EM surveys have delivered the breakthrough moment with two new exceptional conductors identified from MAD184 that are both interpreted to represent massive nickel-copper sulphides.”

“The potential discovery of massive sulphides at these new conductors could be our most important discovery to date as it would confirm the continuity of the high-grade mineralisation at depth and upgrade the western extension of the Cathedrals Belt – which covers the 2.5km long West End Prospect that straddles the major Ida Fault – as a fertile and highly prospective area for further mineralisation.”

With a 100 per cent success rate in testing these kinds of EM conductors in the Cathedrals Belt, St George’s management said it is confident that its next significant discovery of massive nickel-copper sulphides is imminent.

Whilst these new EM conductors further confirm the camp-scale potential of the 16km+ long Cathedrals Belt, which already boasts four shallow high-grade nickel-copper sulphide deposits, the company will have to wait for the rotary diviner to test its claim in due course.