St George Mining has discovered a 700m long nickel-in-soil anomaly across the same trend that is well known for its nickel and copper prospectivity at the company's Mt Alexander project in WA. St George is now planning to conduct a moving loop electromagnetic survey across the Fish Hook prospect to identify new drilling targets. 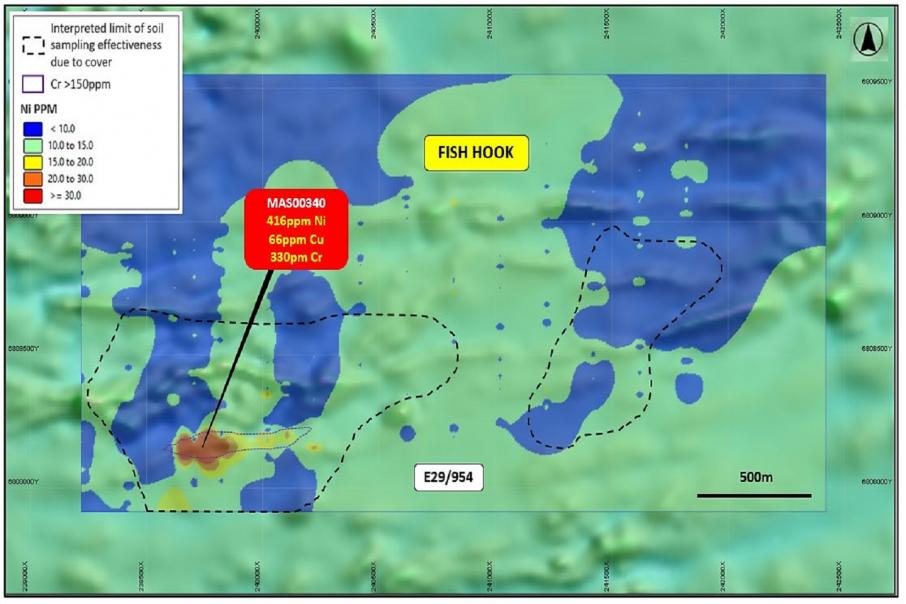 ASX-listed base metals explorer, St George Mining, has discovered a large, 700m nickel in soil anomaly across the same trend that is well known for its nickel and copper prospectivity at its Mt Alexander project in the northern Goldfields.

The anomalous nickel assays are coincident with a linear magnetic geophysical anomaly, where these same features are associated with nickel-copper mineralised ultramafic rocks elsewhere across the Cathedrals Belt at the Mt Alexander project.

Elsewhere, the company is planning to run MLEM surveys at its Bullets and West End prospects.

The new MLEM survey will integrate some fresh technology in the form of a high-temperature superconducting quantum interference device, or “SQUID” for short.

SQUID helps to minimise ‘noise’ levels that originate from the conductive surficial cover so that the EM signal can penetrate deeper and at higher resolutions. In other words, SQUID can assist the operator to get a better handle on what might be lurking below the surface.

The West End prospect, at the project’s western most-end, has sat mostly unexplored but looks to be potentially quite prospective. Another geophysical tool, a sub-audio magnetic, or “SAM” survey identified the presumed continuation of prospective rocks over 2km across the West End prospect.

A single drill hole at the Bullets prospect has encouraged further investigation there too – as it intersected the ultramafic rocks that are known to host mineralisation elsewhere in the belt.

St George will further ramp up its exploration technology and it is planning an extensive seismic survey across the prospective Cathedrals Belt at Mt Alexander. A seismic survey is a low impact, non-invasive tool for gathering information about the location and characteristics of geological features beneath the surface.

St George plans to apply the seismic results to increase its understanding of the host structures for nickel-copper mineralisation.

St George Mining Executive Chairman John Prineas, said:“The soil survey results at Fish Hook are very encouraging because they have identified a new anomalous trend 5km east of the known nickel-copper mineralisation at the Cathedrals Belt. This is an area that we believe is prospective for a greenfields discovery.

“The seismic survey is another exciting initiative with the potential to deliver an exploration breakthrough that could assist us to better understand the controls and distribution of the high-grade mineralisation along the belt.”

Meanwhile, the rods are still turning at the company's Investigators prospect, with three holes completed in the past weeks. One of these diamond holes contained weak sulphide mineralisation and assays are anticipated soon.

It remains to be seen whether or not this smoke will translate into fire, but sulphide mineralisation is certainly a good start.

With St George’s ongoing rollout of a suite of technology that would have been considered to be space-age some decades ago, it is reasonable to assume that if there is more to come at Mt Alexander, St George now has the right tools to find it.