St George Mining shares have jumped by more than 20% on the ASX after news that its Mt Alexander project returned more high-grade drill hits. The copper-nickel-cobalt mineralisation remains open to the north, west and east and the latest results have highlighted the potential for further extensions of the mineralisation, with planning already underway for a follow-up drill program. 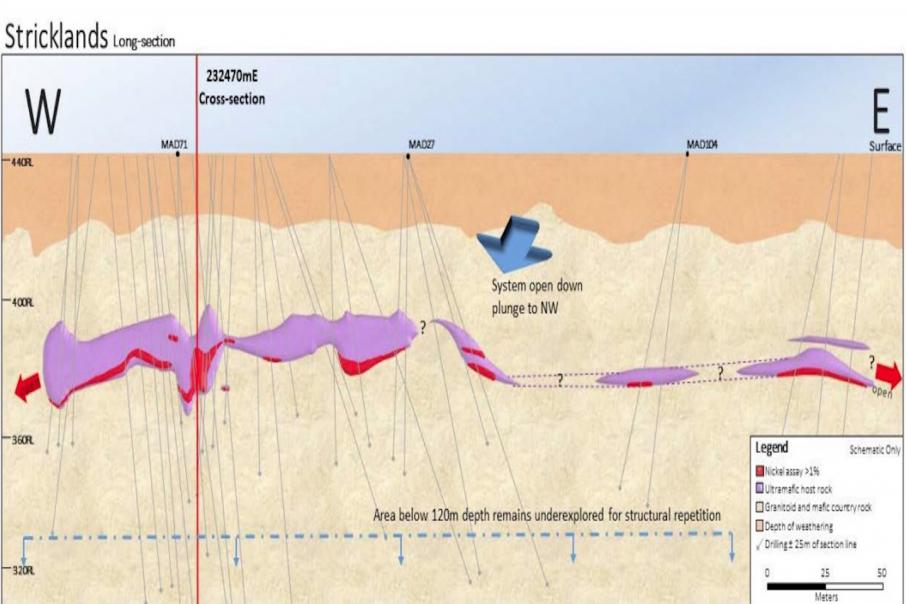 Shares in emerging nickel explorer St George Mining jumped by more than 20% on the release of high-grade assays and news of further nickel-copper-cobalt mineralisation extensions along strike at the Mt Alexander project.

In an update to the ASX, St George reported two impressive new hits from shallow depths at the Stricklands prospect, which is part of the Mt Alexander project, about 11km west of Leonora in the northern Goldfields.

A second hole produced an intercept of 3.16m grading 3.41% nickel, 1.21% copper, 0.15% cobalt and 3.3 g/t PGEs from 66.2m. This intercept was drilled directly north-west of last year’s discovery hole at Stricklands and may indicate an extension of mineralisation at depth. Another new assay result also suggests mineralisation may be open to the west.

The results were released with new cross-sections of Stricklands that show an emerging picture of shallow mineralisation along a 400-metre strike length that is still open to the north, west and east.

St George Mining Executive Chairman, John Prineas, said: “The last round of drilling at Stricklands has identified a sizable extension to the mineralised ultramafic, with new high-grade intersections in the west, north and east of the prospect area.”

“The most exciting aspect is that there is potential for further extensions of the mineralisation with large areas of Stricklands remaining untested. A follow-up drill program is now being designed.”

Stricklands is one of three key prospects at the Mt Alexander project, which is 75% owned and managed by St George. Nickel producer Western Areas holds the remaining 25% stake.

The run of impressive nickel hits by St George could not be better timed, with nickel prices jumping by 21% on the London Metal Exchange in the first five months of 2018 and stocks at a four-year low. Prices are surging on higher demand from the booming EV industry and concerns about sanctions against the big Russian producer, Norilsk.