St George Mining has outlined a significant 200m plunge extension to its nickel-copper sulphide mineralisation at its enticing Investigators prospect near Leonora in WA. A new drill hole intersection penetrated over 14 metres of massive and disseminated mineralisation from 177.5m down-hole, including an impressive 5.25m true width intercept of massive sulphides grading up to 8.8% nickel and 4.5% copper from 185m down-hole. 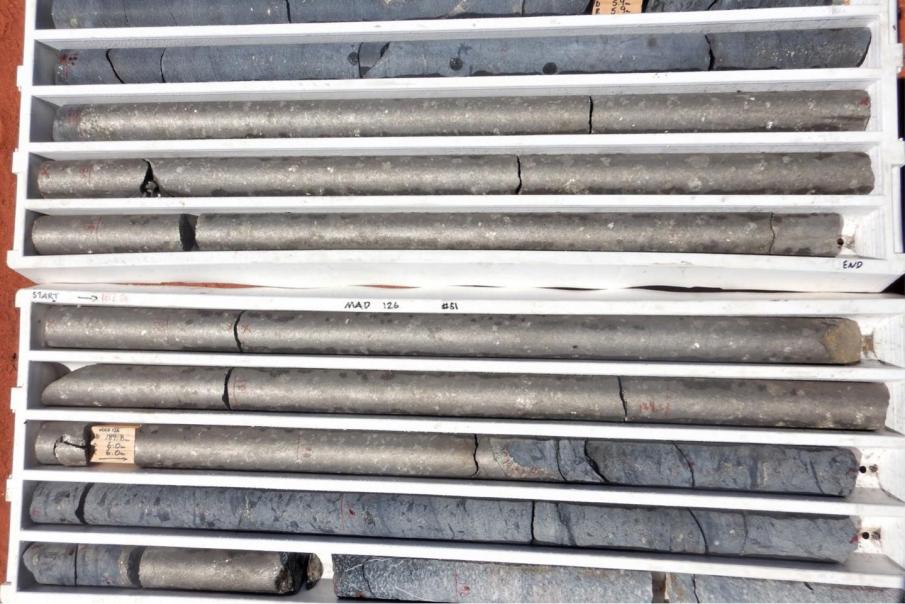 ASX listed nickel explorer St George Mining says it has returned its best ever intercept of massive nickel-copper sulphide mineralisation from the enticing Investigators prospect, located near Leonora in the north-eastern Goldfields of WA.

The latest diamond drill hole has intersected over 14 metres of massive and disseminated sulphide mineralisation from 177.5m down-hole, which includes a highly impressive 5.25m section of the sought-after high-grade massive nickel-copper ores from 185m down-hole.

Portable XRF assays of the latter zone provided encouraging results up to 8.8% nickel and 4.5% copper, alluding to the quality of the new intersection.

Additionally, a 0.2m section of massive sulphides with XRF assays up to 5.8% nickel and 3.7% copper were penetrated at 191.67m down-hole.

The geology of the new mineralised intersection is logged as a mafic-ultramafic rock sequence sandwiched between unmineralised granitoid.

Based on the drill hole angle and the interpreted dip of the geology, St George believes the wide new intersection is close to true width, giving a further boost to the overall prospectivity of Investigators and perhaps; a window into the future economic potential of the deposit.

Importantly, the new drilling confirms a 200m down-dip extension of the mineralisation defined in this section of the Investigators prospect.

According to the company, the new intersection is also supported by strong down-hole geophysical electromagnetic conductors located both up-dip and down-plunge, pointing the way towards further extensions of the high grade zone.

St George Mining Executive Chairman John Prineas said: “The intersection in MAD126 is shaping up as our best ever at the Investigators prospect. This is a particularly exciting intercept as there are strong conductors located up-dip and down plunge of the massive sulphides … giving … confidence that drilling will intersect more massive sulphides in what … may be a significant channelised flow.”

“… drilling is continuing to scope out the scale of the discovery at Mt Alexander with MAD126 another outstanding result that has extended the footprint of high-grade mineralisation.”

The highest grade intersection recorded from Investigators to this point is 5.3 metres grading 4.95% nickel, 2.75% copper and 4.55g/t combined platinum group elements from 157.9m down-hole, located about 260m west of the latest drilling result.

The new intersection is notable for St George, because the drill target was originally delineated using down-hole electromagnetic surveying of existing holes nearby.

The Investigators prospect covers about 1.5km of strike at the western end of a 3.5km long east-west trending mineralised corridor that defines the high-grade nickel-copper system being explored by the company, which also incorporates the Stricklands and Cathedrals prospects.

St George has delineated massive sulphide mineralisation at all three of the prospects on the Cathedrals “belt” to date.

Although the sulphide accumulations have relatively modest widths, the company has employed the use of DHEM surveying to great effect targeting ore grade intercepts thus far at all three prospects.