St George Mining’s new geophysical program has experienced some early success after it identified some exciting conductive features at depth along the Cathedrals Belt that are in positions that look geologically interesting for nickel-copper mineralisation. Amongst the most compelling targets from the new survey is a deep conductive feature lying directly underneath St George’s Investigators prospect where the Perth based ASX-listed company has been enjoying ongoing exploration success. 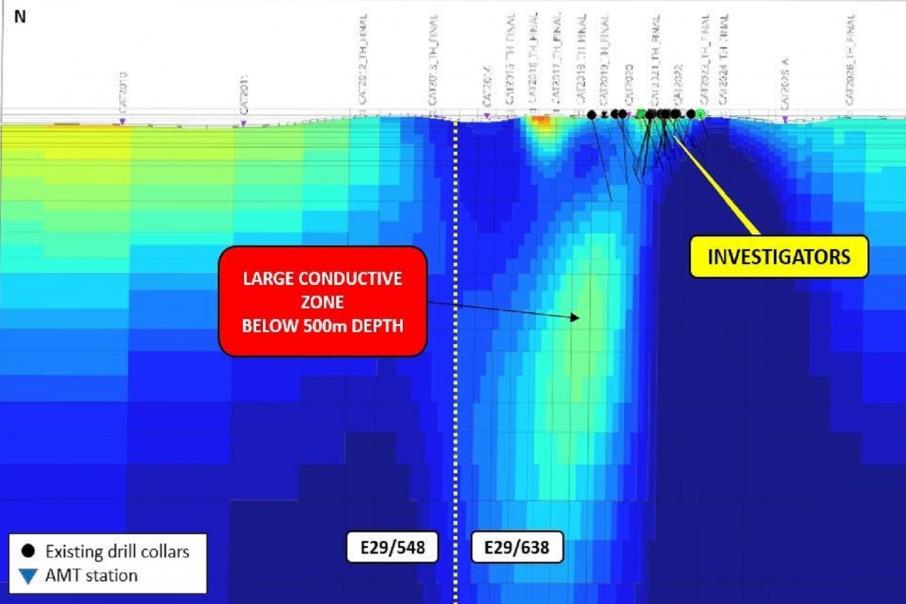 St George Mining’s new geophysical program has experienced some early success after it identified some exciting conductive features at depth along the Cathedrals Belt that are in positions that look geologically interesting for nickel-copper mineralisation. Amongst the most compelling targets from the new magnetotelluric or “MT” survey is a deep conductive feature lying directly underneath and to the north of St George’s Investigators prospect in the north eastern Goldfields where the Perth based ASX-listed company has been enjoying ongoing exploration success.

The MT data appears to show that the known mineralisation is offset by a large fault and also displaced by granites. The company said that down plunge extensions of the Investigators mineralisation could be lying about 500m below surface.

Even more encouraging is that the MT survey picked up the existing known mineralisation at Investigators, providing plenty of excitement around its ability to detect similar structures. St George said the deep feature even has a higher conductivity than the known mineralisation which is another promising sign.

The survey covered an area from the company’s Bullets prospect to the east through to about 10km to the west of the West End prospect and effectively provides cross sections, or “slices” of the conductivity through the earth’s crust.

St George said there are surface gossans at Fairbridge that are associated with a key geological structure.

The MT survey has picked up a conductive zone right underneath Fairbridge and may represent nickel-copper sulphide mineralisation at depth and could be the source of the surface gossans.

The success of the MT survey in producing some compelling targets to work up has driven St George to run extensions to the existing east-west oriented surveys in other priority areas along the Cathedrals Belt.

The company will also run additional north-south oriented MT survey lines across Cathedrals, Fish Hook and West End. It said the new survey has already kicked off and should take about two to three weeks to complete on the ground.

St George Mining’s Executive Chairman, John Prineas, said: “The MT survey data is showing us that there is an extensive and deep-reaching structural network at Mt Alexander, which is typical of large nickel sulphide systems."

“We are seeing new conductive zones along strike and down-dip of known nickel-copper sulphide deposits – these locations are very favourable for the potential discovery of additional mineralisation."

“The deeper conductive zones start at 300m to 500m below surface so we are still looking at depths that are relatively shallow compared to most current nickel sulphide mines in Western Australia."

The company is now planning an extensive drilling program that will kick off once all the new MT survey information is back and modelling has been completed.

Last year, St George also identified more than 30 new electromagnetic targets at Investigators and it is also planning to plug a few holes into this exciting nickel - copper area.

The company has also scheduled a resource drilling program at Stricklands that will form the basis of a scoping study to investigate a low-cost starter mine at the Mt Alexander project.