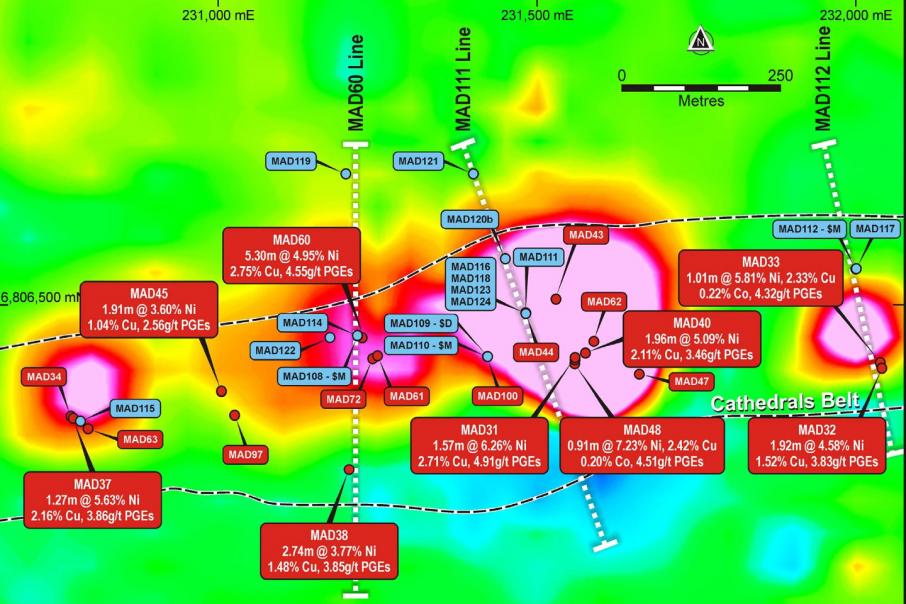 The exciting new intersection extends mineralisation down-plunge and is important for St George, because the target was originally delineated using down-hole electromagnetic surveying of existing holes nearby.

The result is also several hundred metres east of recent drilling results that sit within a 1.5km east-west trending mineralised corridor that defines the Investigators mineralisation.

“The DHEM surveys at Investigators have been successful in identifying further conductors down plunge from known high-grade mineralisation. This is a textbook fit to our geological model, which envisages potential for additional significant nickel-copper sulphides at depth in the down dip direction.”

The new results confirm that a large high grade mineralised system of massive nickel-copper sulphide mineralisation continues both down-dip and down plunge at the emerging Investigators prospect area.

The current exploration program at the prospect is largely being driven by the successful targeting of down-hole electromagnetic conductors located by down-hole surveys in the region.

The drive is to push the definition of these systems deeper and more broadly to establish a critical mass of mineralisation and determine the economic viability of future ore extraction, potentially via conventional open pit mining as a start-up operation, based on its relatively shallow depth.

Drill results from other holes completed at Investigators are still pending.

St George has discovered shallow, ore grade nickel-copper sulphide mineralisation at all three prospects at Mt Alexander and although massive sulphide accumulations have modest widths, the company has employed the use of DHEM surveying to great effect targeting ore grade intercepts thus far.

They say when you’re onto something that works well stick to it and St George has certainly done that with its use of down-hole geophysical surveying for drill targeting at the Mt Alexander project to date.