St George Mining has drilled two holes that intersected nickel sulphide mineralisation at the new Fairbridge prospect of its Mt Alexander project near Leonora, WA, with a large chargeable anomaly to the north of these holes to be drilled this week. Drilling has also confirmed that a new nickel sulphide zone exists in the previously unexplored 500m strike zone between the Stricklands and Investigators prospects in the Cathedrals Belt. 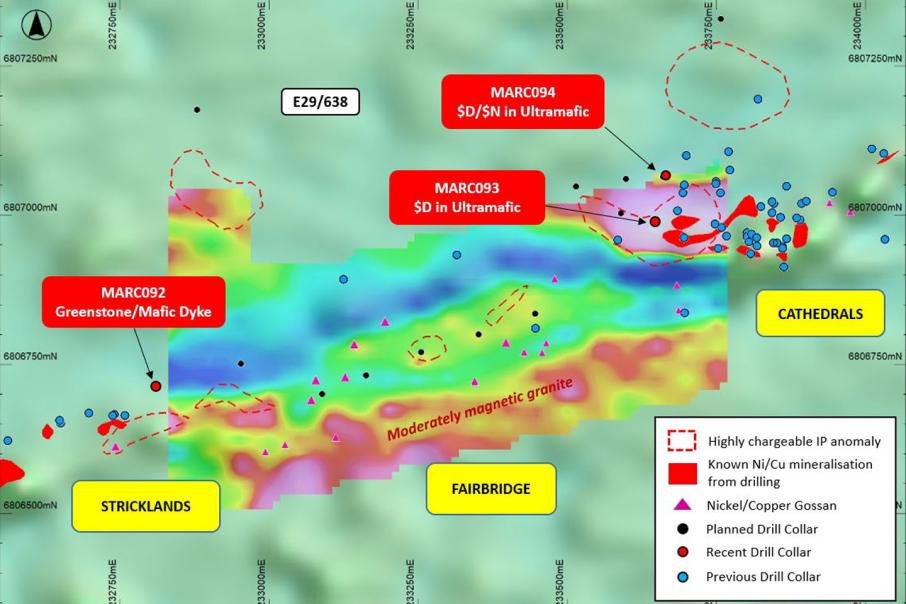 Management said the results indicate that the mineralised ultramafic dips to the north, with stronger nickel sulphide mineralisation located at depth.

The company has modelled a large chargeable anomaly to the north of the second hole at Fairbridge that will be drill targeted this week.

St George previously noted that the anomalies at Fairbridge might be associated with the numerous sulphide gossans that returned impressive surface rock chip assays up to 1.23% nickel and 1.09% copper.

Downhole electromagnetic surveys will be completed to assist in identifying any potential mineralisation around those drill holes.

St George will plan further drilling and geophysical surveys, if warranted, for this new zone of mineralisation once the results of the DHEM surveys have been reviewed.

Executive Chairman John Prineas said: “Initial drill results at Fairbridge fit very well with our geological model for the Cathedrals Belt, which interprets the ultramafic unit dipping to the north with potential for further mineralisation down-plunge.”

“This is encouraging for the remaining nickel sulphide drill targets at Fairbridge – particularly the large chargeable anomalies recently identified down plunge of the known mineralisation at the Cathedrals Belt.”