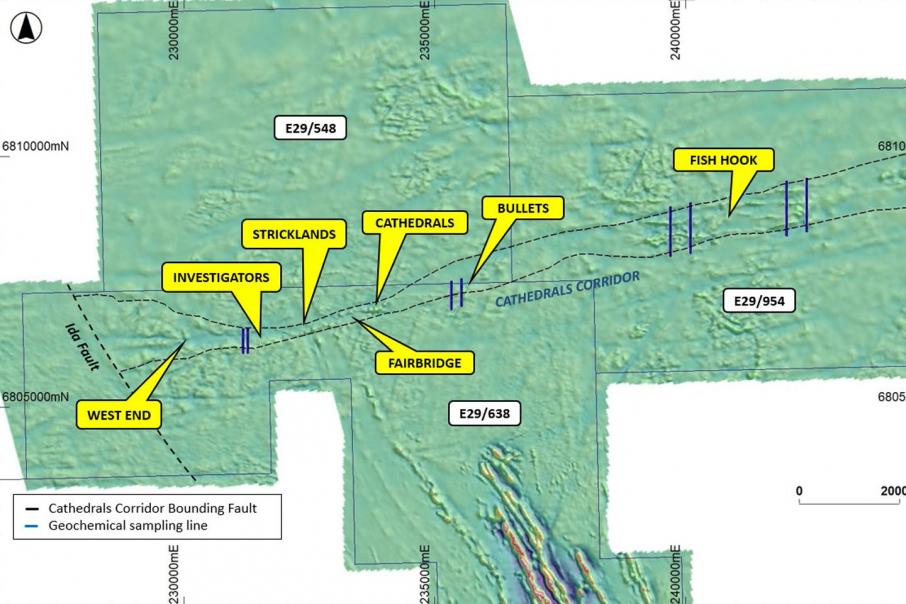 St George Mining has identified the Fish Hook prospect at its flagship Mt Alexander base metals project near Leonora in the Goldfields region, WA, as a high priority nickel-copper sulphide target.

Notably, the highest geochemical soil values coincide with a linear magnetic feature that is interpreted to be a mafic-ultramafic intrusion , a structural setting that is known to be associated with nickel-copper sulphides elsewhere in the project area.

Fish Hook covers an 8,000m eastern extension of the mineralised Cathedrals Belt and is virtually untested by drilling.

St George is now planning to carry out soil surveying over a broader part of the Fish Hook prospect.

Executive Chairman John Prineas said: “The results from the initial soil survey at Fish Hook are remarkable and support the potential for nickel-copper sulphides at depth.”

“The fact that these high value results were returned from an orientation survey is highly encouraging and shows that nickel-copper mineralisation could potentially be widespread along the entire Cathedrals Belt.”

“We are also excited to have commenced a new and optimised EM programme on the western section of the Cathedrals Belt, which we believe is likely to generate more EM targets for drilling.”

The new electromagnetic survey is designed to penetrate below the conductive cover at the Cathedrals Belt.

Earlier this week, the company said it is poised to start drilling 42 new electromagnetic conductors that have been identified by down-hole surveys at Mt Alexander.

These include several high priority targets located away from defined zones of nickel-copper sulphide mineralisation and could significantly extend the defined ore system within the Cathedrals Belt.