St George Mining has intersected additional high-grade nickel sulphides at the Stricklands prospect at the Mt Alexander project, near Leonora in W.A. The 10.9 metre combined intercept is true width, starting from 56m downhole and contained 1.1m @ 6.7% Ni and 1.9% Cu. 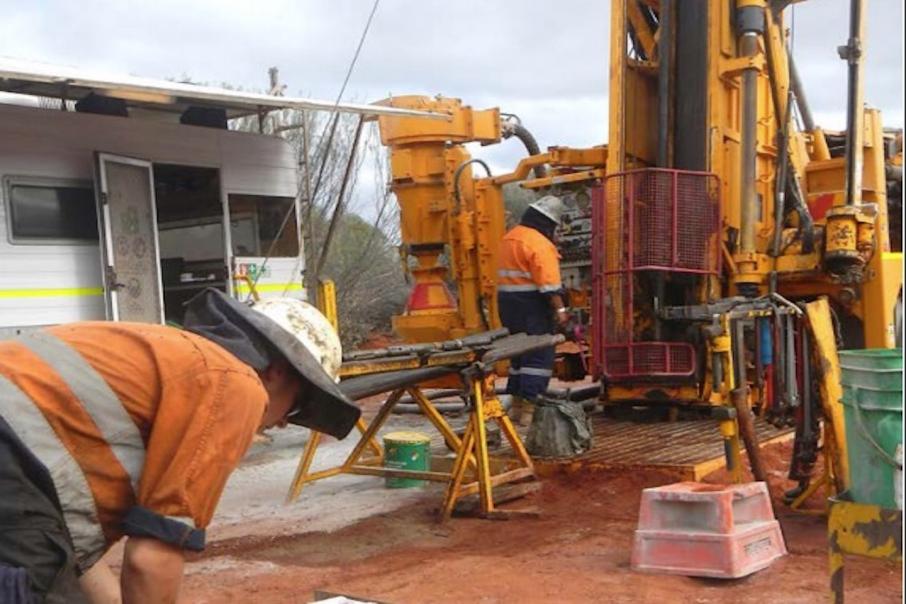 ASX listed St George Mining has confirmed another intersection of high-grade nickel-copper sulphide mineralisation at its Stricklands prospect, located 100km west of Leonora in the north-eastern Goldfields of W.A.

The new diamond drill hole at the Mt Alexander project was completed 100 metres to the northeast of last year’s spectacular 17m intercept that went 3.01% nickel, 1.31% copper and, 0.13% cobalt from just 37.45m down hole.

The latest round of drilling produced 10.9m intersection of combined massive, semi-massive, stringer and disseminated nickel sulphide mineralisation from 56m down hole.

The best intersection was a 1.1m section of massive nickel sulphides from 69.5m, with average XRF readings of 6.7% nickel and 1.9% copper.

Another 1.5m intersection in the same drill hole showed 1.4% nickel and 1.2% copper on the XRF.

Total massive and semi-massive nickel-copper sulphides comprised a total of 2.72m with average XRF readings of 5% nickel and 1.5% copper.

The company is awaiting lab assays from the latest drill hole to confirm the XRF results.

The mineralised ultramafic at Stricklands may extend up to 400m along strike in a southwest-northeast direction according to the company.

John Prineas, St George Mining’s Executive Chairman, said; “We are pleased to see that step-out drilling at Stricklands continues to intersect nickel-copper sulphides along the interpreted extension of the thick ultramafic that also hosts the outstanding intersection in MAD71.”

“With additional drilling underway along strike from these thick intersections of sulphide mineralisation, there is an excellent opportunity to further extend the known mineralisation at Stricklands.”

The new drill hole confirms the consistency of the massive nickel sulphide mineralisation at Stricklands which in-situ and unchanged by later structures.

The preliminary results support the potential for further significant widths and strike extensions of the high-grade ore unit.

The mineralised intersections are located within a large, subsurface conductive electromagnetic anomaly, extending over an area that is 200m long and 150m wide at Stricklands.

A further six diamond drill holes for 500m are planned at Stricklands in the current program, designed to test the identified nickel-rich ultramafic channel.

The company will then complete down-hole electromagnetic surveys in all holes to test for potential off-hole conductive nickel sulphide targets not intersected in the drill trace.

Meanwhile, the drill rig will mobilise to the Investigators prospect, located about 1km west of Stricklands, where deeper electromagnetic conductors over 1km of strike were modelled from a sensitive ground geophysical survey completed in 2017.

Five deep diamond drill holes for 1,000 metres are planned for the Investigators prospect to test this geophysical anomaly and the program will no doubt be keenly anticipated by St George shareholders.

St George has multiple drill ready targets at Mt Alexander and given that Stricklands and Investigators are only two of the nickel-copper-cobalt-PGE prospects held by the company in a 5km long structural corridor, there is much more to do.

With nickel prices sitting comfortably above A$17,000 per tonne and higher-grade forms of nickel becoming prized for their use in lithium ion batteries, cashed-up St George is well placed to make a significant find at Mt Alexander.

The company is now awaiting assay results from its ongoing Stricklands drilling and the start of its exciting maiden deep drilling program at the Investigators prospect.

Management remain confident that an economic nickel resource will be defined at the Mt Alexander project, given that the mineralisation is very shallow and contains significant metal credits with elevated copper, cobalt and PGE contents.

The bulk of nickel production in Western Australia is now underground, so an economic discovery at 30m depth would make for a very cost effective project in comparable terms.