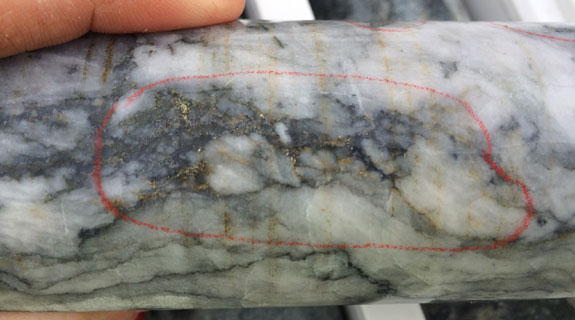 Perth based ASX listed Blackham Resources has produced one of the most spectacular drilling results of the year at its Golden Age deposit near Wiluna Western Australia.

The company recently returned a drill intersection of 5.1m @ 198 g/t gold that included .8m at a whopping 1148 g/t gold with visible gold evident within the core sample.

Even after the super high grade .8m intercept was excluded, the result was still an impressive 4.3m @ 21.3 g/t gold.

The company, which bought the old Wiluna Gold mine out of receivership is looking to build on the 125 000 oz resource at Golden Age to feed the Wiluna Gold Mine mill.

The new super high grade intercept is right on the edge of the existing resource and only about 55m from the old Wiluna Gold Mine decline which the company was granted access to by the DMP in July.

The most recent drill result is the first of an 11 hole program with assay results from all 10 remaining holes imminent.

The company has confirmed that all ten remaining holes also appear to have hit the same structure.

Meanwhile gold crashed through the $1100 US dollar and the $1500 Australian dollar an ounce barriers simultaneously yesterday increasing by over US$20 and AUD$50 an ounce respectively.