Artemis Resources has hit a treasure trove of high grade gold, cobalt and copper drilling intersections from its Carlow Castle project east of Karratha in the Pilbara. Results include a knee trembling 132m intersection grading 4.89g/t gold, 0.25% cobalt and 1.11% copper from 98m down-hole at Carlow Castle South East. The company has now extended the mineralised footprint to a depth of nearly 250 metres below surface. 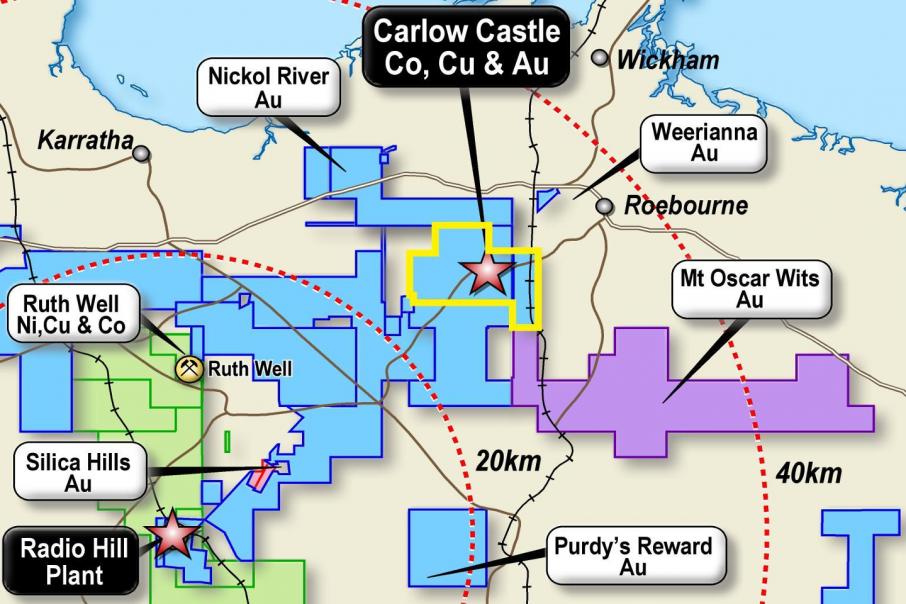 From 211 metres down-hole, the same intersection included a 16m hit going a whopping 18.78g/t gold and a scintillating 0.82% cobalt with 2.37% copper just for good measure.

Artemis CEO Wayne Bramwell said: “Carlow Castle is new and becoming a significant discovery in the west Pilbara. The gold, cobalt and copper tenor defined by Artemis to date is exceptionally high and the system is open at depth and along strike.”

“Our current drilling footprint only covers an area 500m wide by 1.2km long and the three known targets are rapidly morphing into a much larger system than initially predicted.”

The company said that additional assays are pending and will be released when they become available.

The mineralisation strikes in an east-westerly direction for over 1.2km and the company is seeking to join the three deposits into one larger resource that would be more amenable to a future open pit mining operation.

Artemis management said the current phase of drilling is now complete and it is concentrating on updating its highly anticipated mineral resource estimate, once all assay data is received and geological interpretations are finalised.

The mineralisation at Carlow Castle is hosted in chloritic shear zones within an Archaean-aged mafic rock sequence.

The steep dipping ore zones are partially oxidised down to 20-60 metres from surface, with fresh sulphide mineralisation then extending to at least 250m below surface.

It’s shaping up to be an exciting few months for Artemis, as it starts to reveal the true picture at Carlow Castle – the true extent of which is anyone’s guess.