Southern Gold off to solid start at Hampyeong project

Southern Gold has intersected narrow widths of high grade gold mineralisation during its maiden diamond scout drilling program at the Hampyeong gold project in southwest Korea. The best intersection was 0.95m @ 5.33g/t gold from 32.6m depth in quartz veins. Mineralisation was noted over a strike of 750 metres and the company said that there were potential extensions along strike and down-dip for the main ore zones. 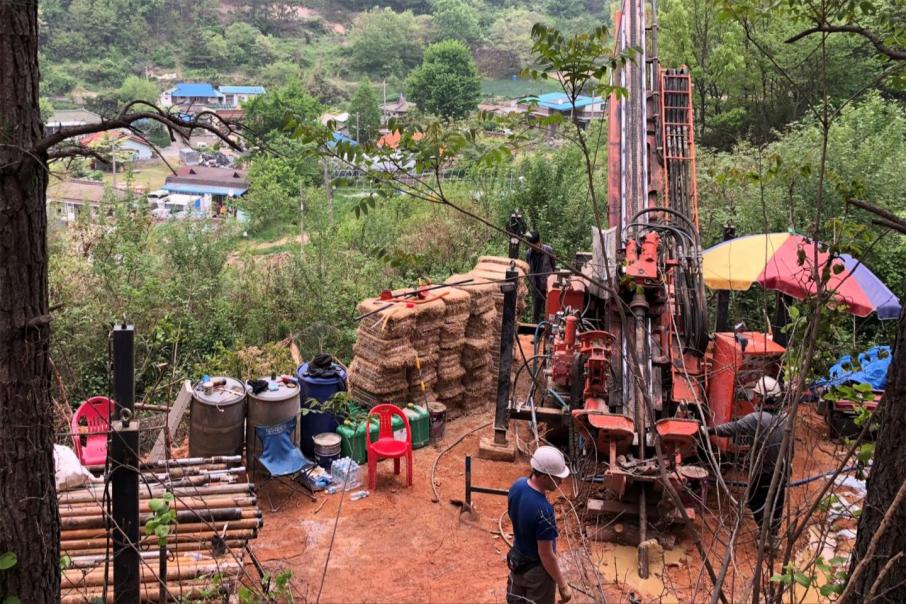 The company says that shallow gold mineralisation was intersected in all three holes of the maiden drill program at Hampyeong, with the tested ore systems still open along strike and down-dip.

Southern Gold Managing Director Simon Mitchell said: “Hampyeong has demonstrated our execution capability in South Korea where we have moved from granted tenure to scout drilling in just a few short months”.

“The results are highly encouraging and demonstrate the potential size of the mineralised system and the potential for extension both along strike and down dip.”

“The target is open in all directions with multiple potential vein hosts to gold mineralisation in this newly discovered system. In addition, Hampyeong is just the start of our broader regional assessment where we can see multiple targets that remain essentially unexplored.”

The tenement block at Hampyeong was granted in February this year and the area hosts the A’Cha, Nabi and Saseun epithermal quartz vein-hosted zones.

The A’Cha and Nabi zones were drilled during the current program of work.

Gold targets at the project were initially outlined by reconnaissance geological mapping and rock chip sampling in mid-2017 by Southern Gold and no prior drilling or systematic modern exploration has been undertaken in the area.

The scout drilling program has confirmed the continuity of the mapped and sampled surface quartz veining to shallow depths of about 50 metres.

Future drilling at Hampyeong will focus on testing the westernmost A’Cha and Nabi veins along strike and down-dip.

The company will also drill test the Saseun vein, that outcrops over 4 metres wide at surface. This vein returned a solid rock chip assays of up to 6.8g/t gold.

Elsewhere in Korea, Southern Gold’s JV partner for the historical Gubong and Kochang gold projects, Bluebird Merchant Ventures, is earning a 50% equity interest by farming-in with a spend of USD$1m, as part of its feasibility studies on the historic mine area.

Bluebird is set to deliver its feasibility report to Southern Gold shortly, outlining preferred re-development options to advance the combined Gubong and Kochang projects with capital costs of less than USD$10m.

The JV agreement with Bluebird was formalised in April this year.

The company also has gold exploration holdings at Glandore, Bulong, Transfield, Cowarna and at Monument South, located just south of the Cannon mine.

All gold prospects lie within an 80km trucking distance of Kalgoorlie with easy toll-treating options should the right opportunity present itself in the company’s prospective looking tenement portfolio.