Southern Gold has scored a bullseye with a new geological model for an area south of the historic Transfind pit, with first-pass drilling hitting gold in all 13 holes and producing a best result of 1m @ 133.67 g/t. The results have backed up hopes for shallow, very high-grade gold that could be trucked to a nearby plant and add to cashflow from the Cannon mine. 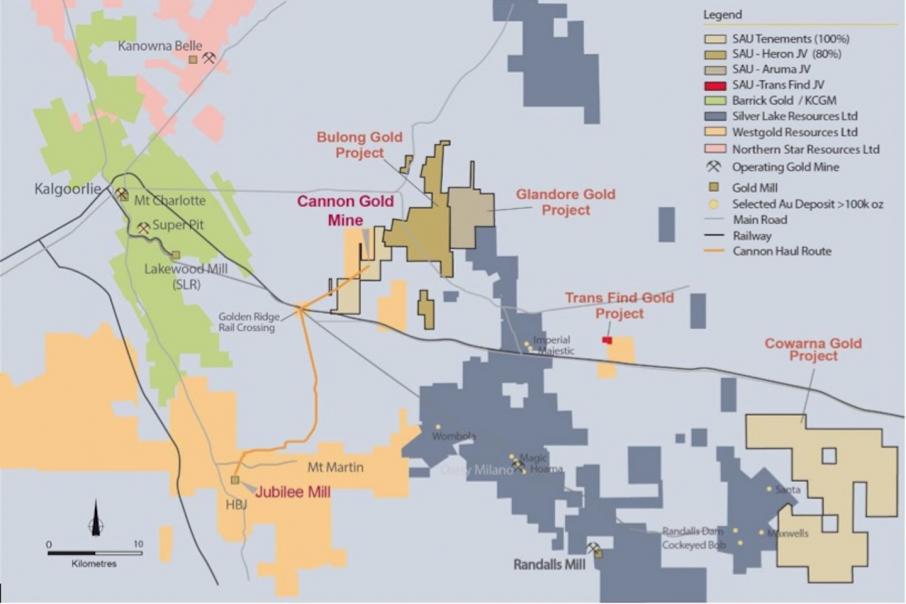 Southern Gold has reminded the market that there’s much more to the company than its topical gold projects in South Korea, with the release of some impressive drill hits about 25kms southeast of its producing Cannon gold mine near Kalgoorlie.

Southern Gold was hoping for shallow, very high-grade gold that could be trucked to one of the many mills in the area and the program has certainly delivered on those expectations.

A second drill program of about the same size is being planned for the second half of 2018 to test for depth extensions and for very high-grade pods along strike.

The company last year struck an option agreement to purchase four prospecting licences at Transfield currently held by two local prospectors, who had been finding gold at up to 78.7 g/t in surface samples near the historic open pit.

Drilling by previous explorers at Transfind South had not been impressive, with a best result of 4m @ 6.14 g/t, but Southern Gold went in with a model that predicted a smallish, very high-grade system had been missed.

By targeting intersections of structural features that also coincided with soil gold anomalies, Southern Gold has so far managed to drill with a 100% success rate and achieve a best grade that is more than 2000% higher than previous results.

Southern Gold Managing Director, Simon Mitchell said: “Nice to see some high-grade intercepts out of our first pass drilling at Transfind South. And by high grade I mean in excess of 20g/t gold. Our target here is a deposit with very high grades that will be amenable to trucking some distance to a plant. So far it seems to be shaping up nicely, vindicating the potential highlighted by the Kalgoorlie-based prospectors.”

The company also reported that its very first drill program at the 100%-owned Cowarna project had confirmed the presence of gold mineralised zones that could be secondary markers of significant mineralisation at depth. Cowarna is about 25kms southeast of Transfind and about 75kms southeast of Kalgoorlie.

Drilling has delineated the location and dip of the prospective banded iron formation or “BIF” horizons within the northern limits of the Eastern BIF unit. This will allow accurate targeting of the more prospective, stratigraphically lower Maxwell’s BIF Member in upcoming deep diamond drilling that is co-funded by the WA government through the Exploration Incentive Scheme.

Southern Gold’s tenements cover more than 20 kms of strike length across a prospective BIF unit. The first drill program focused on a small section in two locations, which means the project potentially has a lot more upside to it.

The company is unusual among junior gold explorers in that has steady production from its 100% Cannon gold mine to underwrite some very interesting exploration plays in WA and in South Korea.

The Gubong project in South Korea is potentially a much larger mine than Cannon and could be transformative if Southern Gold and its UK partner, Bluebird Ventures can achieve their target of a positive development decision in the next 12 to 18 months.