Southern Gold’s project generation strategy for pinpointing epithermal gold and silver targets in South Korea is starting to bear fruit with the company outlining its fourth new project acquisition at Neungju. Recent rock chip sampling at the project produced grades up to 20.3g/t gold and 13g/t silver and follow on from the discovery of 18g/t gold and 270g/t silver rock chips from the historical Sonbul gold mine nearby. 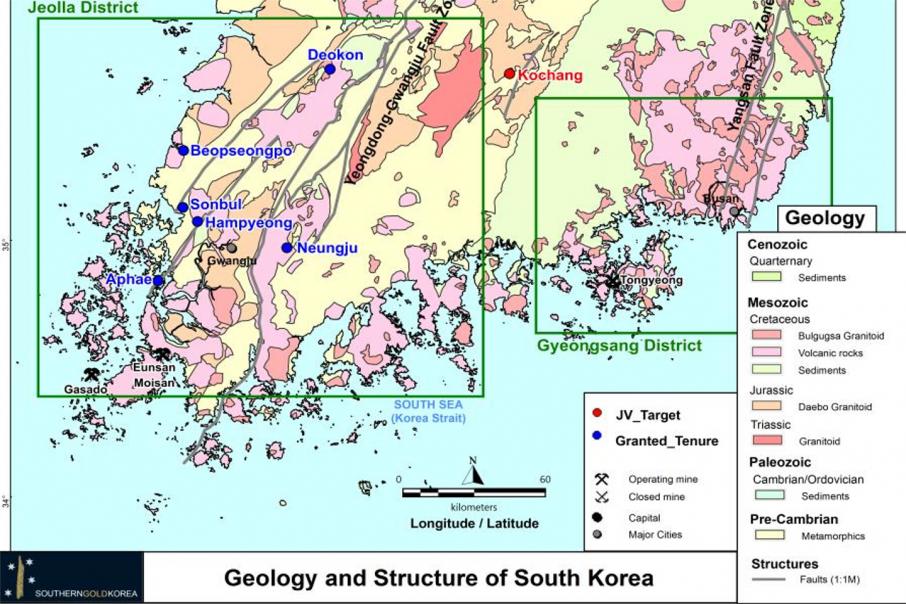 ASX listed Southern Gold has largely flown under the radar over the last 12 months whilst patiently accumulating a valuable set of under-explored and highly prospective gold and silver projects in South Korea.

The company has steadily built up a significant portfolio of epithermal exploration plays, often surrounding old mining districts, to become by far the largest foreign mining company active in this part of the world.

Southern Gold’s tenement package of epithermal targets covers the whole gamut of these mineralised systems and importantly, many of the near-surface expressions of those targets have significant depth potential, according to the company.

Management has been very selective in its consolidation of nearly 150 square kilometres of ground in South Korea.

This strategy reflects the company’s broader plan to acquire ground with the right geological ingredients and preferably a number of old workings that are capable of hosting serious sized deposits that escaped the scrutiny of the old timers who did not have the advantage of modern technological advances.

Hence, Southern Gold has chased prospective corridors of epithermal mineralisation that are look-a-likes to similar bonanza-grade deposits at the southern end of Kyushu Island in Japan.

The best known of these is the Hishikari gold mine, which has historically produced a total of 7.6 million ounces of gold at between 30-40g/t gold and still regularly churns out about 225,000 ounces annually.

Southern Gold now has a number of potentially similar looking deposits to Hishikari in its armoury of projects on the south Korean peninsula.

Company M.D. Simon Mitchell said: “… the Project Generation strategy is not to ‘land grab’ for the sake of it but to build a quality portfolio of targets with demonstrable mineralisation on or close to surface with the potential for the discovery of a tier-1 gold deposit.”

“… Tenure is difficult to secure in South Korea and we have now been successful in acquiring 4 additional projects over the course of 2018, including Beopseongpo, Deokon, Aphae and now Neungju.”

“This suite of projects in the Republic of Korea is a potential game-changer for Southern Gold and, subject to securing access and regulatory approvals, we look forward to commencing drilling activity on these new projects by the end of the year.”

Most recently, the Southern Gold had a new tenement granted at the Neungju precious metals epithermal target, where rock chip sampling across multiple vein corridors returned impressive grades of up to 20.3g/t gold and 13g/t silver.

The target was originally identified by mining heavyweight Ivanhoe Mines back in 2001, when the gold price was about a quarter of its value today.

Follow-up sampling on quartz veining over 1km long at the historical Sonbul gold mine, which is an existing Southern Gold asset, produced grades up to 18g/t gold and 270g/t silver, attesting to the area’s prospectivity.

The ongoing generation of new project areas seems to be yielding a few gems for Southern Gold and several other prospects are being prepared for application or acquisition, according to management.

A significant number of exploration targets have also been assessed in the Jeolla and Gyeongsang provinces, of which a number have been prioritised for follow-up.

It is shaping up to be an exciting period of exploration activity for Southern Gold who has clearly been an early mover in this exciting geological precinct.