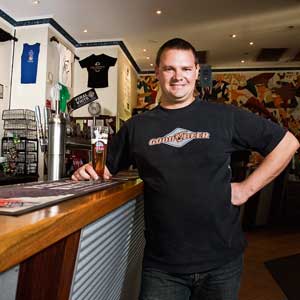 ALL ABOUT THE BEER: Brendan Varis says brewing good beer, not winning awards, is his motivation. Photo: Grant Currall

AT Feral Brewing Company, they don't subscribe the adage that the customer is always right.

"We're a bit self indulgent here. We make the beer that we like to drink," brewer and part owner Brendan Varis says.

Still, the brews at the Swan Valley establishment must be garnering broad appeal, having won five trophies at the Australian International Beer Awards.

"When you get recognition like that from your peers, it's all very satisfying and rewarding, but that's not the motivation," Mr Varis says.

He and business partner Jeremy Carragher, who looks after the restaurant attached to the brewery, are clear they are a niche player appealing to a particular, if limited, market.

"We're never going to be a million-boxes-a-month brewer. We like more flavour, and sometimes flavour offends people. If people are offended by our flavours, we accept it's not for everyone. There are enough people out there with sophisticated palates," Mr Varis says.

The company's marketing difference, he says, comes from the catchy name combined with the wild pig logo and the slogan, 'Undomesticated yet sophisticated'.

"It's feral, and undomesticated, because it's those really big, wild flavours. Yet it's also sophisticated," Mr Varis says.

He maintains the company is "probably not very good at marketing", making its best contact with the public at wine shows and community fares.

"We get people to try it, and the flavour will sell itself. It's very much a quality focused approach; try it, and we feel you'll like it," Mr Varis told Gusto.

It is also a boutique approach in distribution, with brewers hitting the road about once a week to deliver kegs to Perth-based wholesalers.

"So the guy who's making the beer is also delivering the beer, and performing a sales line as well," Mr Varis says.

Despite its boutique roots, the nine-year-old company is clearly expanding, with 120 outlets in Western Australia, a distribution agreement in Victoria through neighbouring winery Oakover Wines, and beer lines soon to appear in national chain, Dan Murphy's.

Mr Varis says he wants to grow sales to bring quality beer to a wider market.

"Our reason for growth is that we want people to understand there's more to beer than the 90 per cent that makes up the market," he says.

The privately owned Feral achieves about $3.5 million in annual sales, of which 65 per cent comes from the Swan Valley establishment. The remainder comes from the wholesale market.

Feral operates in a tough market, judging by the performance of listed microbrewers in WA.

Fremantle-based Little Creatures is the only listed brewer that has performed consistently well, while Gage Roads has a patchy earnings record, and Empire Brewing and Oz Brewing have failed to deliver on their plans.

Mr Varis says the secret to Feral's survival in a business notorious for failure is being insulated against intrinsically low margins.

"The whole thing with selling beer around the country is that it comes back to economies of scale. Until you reach that critical mass, you're working on little or no margins," he says.

"The reason we're able to do what we do, and the reason that Little Creatures were able to get the traction they did, was because we have quite busy hospitality venues attached to our breweries.

"There are easier industries to make a buck in, so you need to be in it for other reasons."

Which leads to the obvious question: Why is Mr Varis in it?