Asset income rather than revenue from students will underwrite the future of WA’s public universities, but only if government policy catches up with the realities of higher education funding click through to see more on our universities feature. 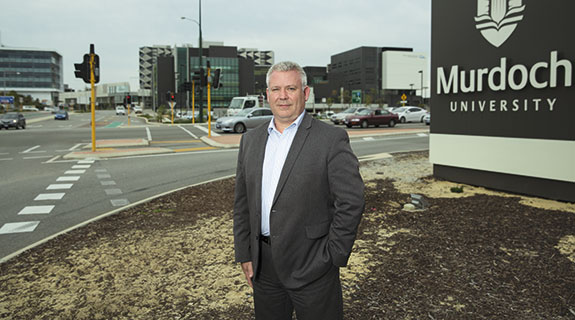 BOUND: Steve Dickson has been agitating for changes to the Murdoch University Act. Photo: Attila Csaszar

Asset income rather than revenue from students will underwrite the future of WA’s public universities, but only if government policy catches up with the realities of higher education funding.

Capital funding models and investment strategies are the dominant factors in the future financial plans of the state’s public universities, with chancellors and their senates having recognised that fees alone will not be sufficient to fund future growth.

All universities spoken to by Business News have major projects in the pipeline, but it appears these strategies are being stymied by outdated public policy, which limits some commercial activity on university land as well as how much debt universities can take on. And while this is not the only measure of the universities’ financial sustainability, it does suggest all four institutions are under some measure of financial pressure.

Fee deregulation has been stalled in the federal parliament for now, but the stark reality for these institutions is that fee income alone will not be enough to fund their future operation and expansion.

Cost cutting was identified as the major contributor to the improved result but Professor Johnson warned the environment remained challenging.

Among the biggest impediments to the expansion of commercial activity is the restriction on how much money universities can borrow, according to Professor Johnson.

UWA reported $38.56 million in investment revenue in its 2014 result; and while not all of this income is available to fund the ongoing business of the university, it’s an important source of revenue.

This investment revenue compares with funds raised from fees and charges of $147.5 million for the same period.

At a time when the federal government is agitating for universities to take greater control of their own financial destiny, the Commonwealth limits how much these same institutions can borrow.

“But universities are constrained by the state and federal governments … and a view that gearing of more than 10 per cent or 12.5 per cent is high risk,” Professor Johnson told Business News.

“It’s not legislated, but the state attorney-general and the department in Canberra both produce a tabulation of universities which says if you have gearing of over 12. 5 per cent you are a medium to high risk.”

UWA was almost totally funded by the federal government just a generation ago; today this support is closer to 55 per cent of the cost of running the operation.

To meet this ever-increasing funding shortfall, all the universities have increased their intake of full-fee paying overseas students.

This is not a call for unfettered investment by the public universities, however, with Professor Johnson acknowledging the need for appropriate checks and balances.

“You don’t take on debt to keep the lights on, for example, but virtually all the universities have taken on debt to finance accommodation,” Professor Johnson said.

He said universities in other parts of the world had been through similar processes; and while there were inherent risks when universities took on more commercial activities, that had to be balanced against the steady decline of public funding.

“If we expect universities to be more entrepreneurial we have to accept that … there are risks,” Professor Johnson said.

During his time as vice-chancellor of La Trobe University, Professor Johnson was closely involved in a $288 million joint venture with the Victorian Department of Environment and Primary Industries to develop a research facility.

UWA was not currently looking at any private public partnerships, but Professor Johnson said the university needed to explore all models of capital funding for the future.

“Interest rates are low and the world is awash with capital that can’t find a use,” he said.

The other barrier to entrepreneurship among the universities is a state government issue – universities’ acts.

Each university operates under its own act, which (among other things) sets out what commercial activities can occur on campus.

Under its act, UWA has run the Perth International Arts Festival for more than 60 years.

However, a strict reading of the Curtin act would not allow for a comparable cultural festival.

These inconsistencies are inequitable but they’re also holding up major commercial projects, such as Murdoch University’s Eastern Precinct development.

Murdoch’s senior executive director, Steve Dickson, has been agitating for changes to the act, which would bring WA’s university sector into line with the rest of Australia.

He said the act was widely recognised as being outdated and didn’t fit with the contemporary model of universities.

“Western Australian universities are at a disadvantage, particularly in relation to looking at alternative income sources to support their teaching, learning and research strategies,” Mr Dickson said.

“We are working very closely with the department of education services … in relation to the drafting of the act, but we are not there yet.

“And we have a commitment from the state that this will happen this year.”

Changes to the act will pave the way for Murdoch to develop its Eastern Precinct property, a 44-hectare parcel of land adjacent to the Fiona Stanley and St John of God hospitals.

The MAC could support as many as 35,000 workers in the future and develop into an influential urban hub, according to the university.

Murdoch plans to transform its property into a $3 billion ‘knowledge precinct’, with services for the huge hospital workforce and patients as well as research, teaching and commercial facilities.

“This land sits next to the greatest concentration of acute beds in the Southern Hemisphere,” Mr Dickson said.

“The MAC is one of WA’s pre-eminent developments sites because it already benefits from key infrastructure, with rail bus and road links connecting the campus.

“And it fits the state government’s preference for transport-oriented development.”

Murdoch is already in talks with potential development partners, and claims there’s no shortage of interest; but nothing can progress until the state government makes changes to its act.

“This is pivotal to the university’s strategic plan and we have aspirations to bring some of the best research and students to Murdoch from across Australia and the world,” Mr Dickson said.

“Most universities around the world don’t only rely on undergraduate income any more, this is particularly the case in Australia where we are in an environment of reducing Commonwealth funding.

“We have a charitable status, so whatever income we secure gets pumped back into teaching and research.” CONCEPT SKETCH: The Paddock and Murdoch Square. Image courtesy of Cox I Urbis

The development at Murdoch fits in with the state government’s push to diversify the economy and reduce the reliance on resources royalties.

The Murdoch senate has already approved in principle the first stage of the development, which equates to a $300 million investment over the next five years.

“There is huge demand for this opportunity to work with the university in a number of different ways and public, private partnerships are just one model,” Mr Dickson said.

Private public partnerships are a central plank in Edith Cowan University’s long-term financial plan, and the university has managed to strike a number of deals that fit within its act.

Vice-chancellor Steve Chapman said ECU was already working on establishing an endowment precinct on the northern side of its Joondalup campus.

He said this would include more than 100,000sqm of new office space and deliver ongoing revenue for the university as well as facilities for ECU to collaborate with community and industry partners.

“ECU has the advantage at its Joondalup campus of owning the land outright, which provides us with more flexibility than other universities in developing exciting projects that support the ongoing sustainability of ECU,” Professor Chapman said.

CLV already manages more than 700 beds for the university at its Joondalup, Mount Lawley and Bunbury campuses.

Financial sustainability for Curtin necessarily involves the exploration of a number of capital funding models, including PPPs, according to vice-chancellor Deborah Terry.

But she warned all these vehicles had risks attached, and in the end the goal of financial sustainability had to be balanced with the drive to maintain quality teaching and research.

The rapid growth in education as a major export commodity in Australia has been in inverse proportion to the decline in public funding for the higher education sector.

These full-fee paying students have lined the coffers of universities all over the country and a weaker Australian dollar is likely to bolster numbers again this year.

Curtin has the biggest overseas cohort of the four public universities, accounting for about 30 per cent of its student population.

The university has been a major international player for more than a decade and a half. It was the first university in WA to set up an international campus with the launch of its Malaysian school 16 years ago, while its Singaporean campus opened its doors nine years ago.

Professor Terry’s approach to financial sustainability and identifying the right commercial opportunities for the university has research and teaching at its heart.

It’s not just about finding new income streams; the university needs to position itself as an innovation precinct, according to Professor Terry.

“I want more student housing, more short-stay accommodation so we can create an environment where we can attract more related entities and they will require different capital models,” she said.

“They might be startup businesses that come out of our own research or research-related entities that would like to link with that kind of work.”

Professor Terry said the commercial-education mix was clearly evident at the two major universities in the Boston region in the US, Harvard and MIT, where commercial operations were clustered around the university campuses.

This vision of Curtin with technology spin-offs and research-related commercial entities adjacent to the campus shares many similarities with Murdoch’s plans for its eastern precinct and leverages the connections between research and industry.

Both will require state and federal support and some recognition from government and the community that universities need to take on greater debt and risk.

One of the alternatives will be a big increase in foreign student populations, but there are signs this slice of the market is under pressure on a number of fronts.

Reports of falsified documents, unethical behaviour by offshore agents and the emergence of sham training courses may yet take their toll of Australia’s $16 billion education export market.

Participants in Universities Australia 2014 International Student Survey rated the quality or reputation of their qualification as the top reason for studying in Australia.

And this was demonstrated through their commitment to the creation of the Education Services for Overseas Students Act, which will increase government oversight of foreign students.

“Our outward looking, globally connected universities are honoured to host so many international students from around the world,” Ms Robinson said.

“The high level of global engagement helps define and distinguish the Australian higher education system from most others.”