Small is beautiful on the water's edge

The team at revamped In Contro on the South Perth foreshore are hoping to make the best of the ‘rock-star’ location and a piccolo-style menu. Carolyn Herbert reports. 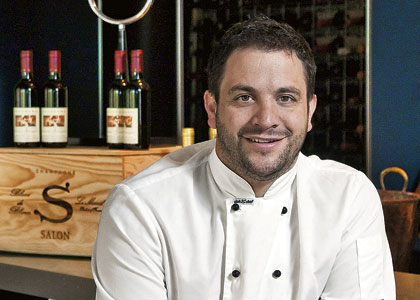 TOP SPOT: Veteran chef Peter Manifis says it has always been a dream to one day have his own business. Photos: Grant Currall

The team at revamped In Contro on the South Perth foreshore are hoping to make the best of the ‘rock-star’ location and a piccolo-style menu. Carolyn Herbert reports.

Two years ago executive chef of In Contro, Peter Manifis, jumped at the opportunity to join owners Anna Watts and Charlie Radici in running their South Perth restaurant.

Mr Manifis has been the chef at In Contro since it opened its doors in 2004, but now he is juggling the day-to-day running of a restaurant and continuing to produce top-notch Mediterranean fare in the kitchen.

Mr Manifis, who has worked as a chef for more than 20 years, says it has always been his dream to one day have his own business.

“For me, it has been a long-time goal to own my own place, I’ve been working with my business partners Anna and Charlie for the last seven years and at the beginning of last year they appointed me a partner and it has been really good for me,” he tells Gusto.

“I used to think that I was the perfect employee, but when I became a business owner, I realised just how much needs to be done and I do so much more now.”

Shortly after being appointed a part owner of In Contro, Mr Manifis says he, Ms Watts and Mr Radici decided the restaurant needed a serious overhaul.

The restaurant is on the corner of Mends Street and Mill Point Road and sports uninterrupted views of the Swan River, so the trio knew they needed to do more with the then café-style venue.

“A year and a half ago Anna made the call to renovate and it has really turned the business around,” Mr Manifis says.

“I think with having such a rock-star location, we wanted more out of it and felt the business had a lot more potential in it … we were expensive enough to be a restaurant but we were still in a cafe mode, so we had to make that decision of where we were going to go.”

The decision was made to cover up the cake cabinet for good, completely redecorate the restaurant and re-introduce it to its patrons as a casual, ‘piccolo’-style restaurant.

“We now have ‘piccolo’-style dining, they are not tapas, more like shared entrees of small dishes, which are a bit more substantial than tapas,” he says.

“The food is a blend of Italian, Spanish, Greek and French and we have some excellent European beers and wines to match the menu and that has really been a gradual evolvement of the business.”

Mr Manifis says the new style has lured different patrons and also enabled the restaurant to attract a better calibre of staff.

“We’ve kept some of our core staff since the renovation, but before, we seemed to attract staff that were less professional because it was a cafe,” he says.

However, Mr Manifis tells Gusto the impact of the mining boom combined with the general attitude of Gen Ys to work means staffing is still one of the biggest challenges for the business.

“The fact is, the first year of any young person in the business is usually teaching them how to just be punctual, respectful and not to talk back, once you get over that they get into the mode, but they have to get past that first year,” he says.

“And they have to like the lifestyle of hospitality more than just money, because at the end of the day, if money talks with some of them we can’t help them, because the industry is never going to be competitive with what they can get flying in and flying out.”

Instead of advertising for staff on the internet, Mr Manifis says the trio prefer to employ staff they know or who are known by their patrons.

“We find that by advertising on something like Seek, by the time you go through applications from around 100 people, you might only get two that are decent,” he says.

While beneficial to the business, managing the growing functions side of the business has also been a learning experience for the partners.

“We attracted more functions when we did the refurbishment; it’s a beautiful venue so we tend to attract those small weddings and engagement parties,” Mr Manifis says.

“But the only problem with those is that you knock out your regular clientele who want to come in on a Friday or Saturday night and we made the mistake this year of pretty much booking up all our Fridays and Saturdays in December with functions.”

Mr Manifis says a new approach will be to allow only one of those nights to be booked out, to allow In Contro’s regular clientele to enjoy an evening meal on the weekend.

He says the trio’s next project will be to introduce cooking classes to patrons on Saturday afternoons.

“I want to share my love of food with the world and not only do you get to talk and learn about food, you get lunch and the whole experience to go along with it,” he says.