How many companies can vouch for the ethics of every business in their global supply chain? A new campaign will require many smaller businesses to do just that. 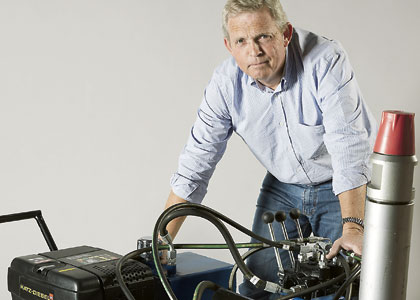 ON BOARD: Bruce Perkins, whose National Drilling Equipment imports product from Europe, the US, China and India, says FMG’s request that NDE share its core values and beliefs was the first of that kind he had encountered.

How many companies can vouch for the ethics of every business in their global supply chain? A new campaign will require many smaller businesses to do just that.

FORTESCUE Metals Group founder Andrew Forrest has attracted some coverage recently for his support for an international campaign against forced labour, trafficking and slavery.

Mr Forrest recently announced the appointment of Nick Grono as CEO of the Walk Free campaign, which has the backing of his Australian Children’s Trust.

Around the same time, FMG launched its own program.

The company wrote to its suppliers and contractors asking that they:

“Share our core values and beliefs, especially as they relate to the rights and liberties of individuals. For this reason, Fortescue is requesting our suppliers to join us on the journey to end slavery by ensuring there is no element of forced labour in their operations.”

FMG asked its suppliers and contractors to certify that they had in place necessary processes, procedures, investigations and compliance systems to ensure their organisation and their direct supply chains do not include, condone or allow for slavery or forced labour. Suppliers and contractors were requested to sign a statutory declaration to this effect.

It should be noted that in the world of global economic trade, business outsourcing and seeking competitive advantage, the concept of Corporate Social Responsibility is not a new term, nor is FMG by any means first or alone in introducing such concepts. For a number of years, companies such as BHP Billiton, Rio Tinto, Coles and Woolworths have introduced varying forms of CSR compliance to their supply chain procedures and contracts.

• BHP refers to its ‘Supply Source to Contract’, which contemplates zero tolerance by suppliers to such practices as child labour and forced or compulsory labour.

• Rio refers to ‘The way we work’, wherein it expects suppliers to maintain policies that, among other things, respect basic human rights, freedom from slavery and cruelty.

• Woolworths expect suppliers to comply with the requirements contained within its published ‘Ethical Sourcing Policy’, which expects suppliers, no matter where they operate in the world, to meet minimum standards based on the principles of the United Nations universal Declaration of Human Rights. These requirements contain among others, reference to child labour and a living wage.

The difficulties and diligence required by the most committed of organisations was illustrated by the recent revelations relating to the production of Sherrin footballs, and clothing supplied to Coles.

In both cases it was apparently external information provided to the companies which alerted them to the issue of worker abuse, and not their own internal procedures or audit. Of course the most notorious case of worker abuse was Nike, now many years ago.

While forced labour and slavery is considered primarily an issue for developing countries, our

own backyard in Australia is not immune from the possibilities.

We have had past issues with illegal immigrants and work visa visitors wherein debt bondage, coercion, exploitation, threats of deprivation and control have enabled unscrupulous employers to exploit such workers. This has occurred in the retail, agricultural and construction industries, it is in this context that the action by FMG has focused the issue of worker abuse or slavery at the direct supplier level, and therefore within the ambit of numerous small-to-medium businesses servicing the mining industry.

We live in a global world, where overseas outsourcing, or simply importing supplies, is a way of achieving competitive advantage. Of course there are many aspects to the decision to import, where quality and the ability to work to specification and timeframe are paramount.

There are, however, considerable cost pressures within which the business must work and compete. The pressure to chase the least cost alternative can be at the expense of the workforce used to achieve such a cost competitive outcome.

CSR is not a new concept, but the application to the everyday processes of small-to-medium businesses is new, and the need to have in place documented processes and procedures to enable verification of compliance will be a necessary layer of cost to do business.

Perth business owner Bruce Perkins, who supplies a range of imported material for the exploration and water drilling industry, said the FMG request was the first of that kind he had encountered. Mr Perkins is managing director of National Drilling Equipment, a business that imports product from Europe, the US, China and India, as well as supplying local product.

While dealing with many forms of supply contracts that contained clauses dealing in a tangential manner with human rights, Mr Perkins indicated the focused and specific declaration required of FMG was a major change from his previous experience.

“I was certainly surprised by the directness and scope of the requirement, particularly as it related to our direct suppliers, some of which were overseas, and some we are aware of are themselves importing product which we then acquire,” Mr Perkins said.

“Having said that, and once fully digesting the whole focus of the Fortescue campaign to end slavery, my business is very happy to support FMG on this journey.”

Mr Sells said the direct nature of the required declaration was very positive and highlighted the issue in its own right, rather than it being embedded within a large contract where the message could get lost. Having considered its own position, Action has completed the statutory declaration for FMG.

Like many of the businesses responding to FMG, National Drilling Equipment has communicated its endorsement of the program but has requested a period of time to implement documented procedures, which can be subject to verification and audit. This particularly applies to the overseas companies from which imported product is sourced.

Like most businesses, National Drilling Equipment is confident that its suppliers do not subject their workforce to slavery or forced labour. In the normal course of establishing supply chains, factories are visited with a primary focus of quality assurance and specification.

As the pace of globalisation accelerates, and customers demand more competitive prices, businesses will continue to search for the least cost alternative, while still maintaining quality. With labour rates increasing as the Chinese economy matures, businesses may go elsewhere to achieve such ends - Bangladesh, Mexico, Brazil or India.

The balance between assisting a developing economy and ignoring the pitfalls of child labour and worker abuse will be ever present. It is now incumbent on those companies pursuing construction and manufacturing in developing countries to not only satisfy themselves as to quality and specification, but also to be able to establish in a documented form their CSR as it relates to working conditions.

The Walk Free website is www.walkfree. org. Another website of interest is that of Anti-Slavery Australia at www.antislavery.org.au.

• Geoff Brayshaw is a director and minor shareholder of FMG and National Drilling Equipment.