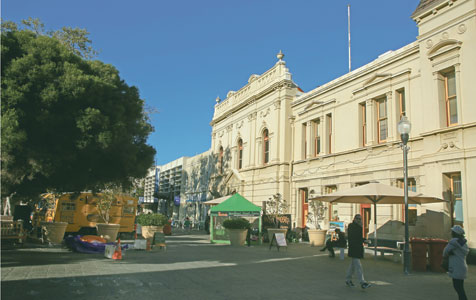 Investment Group Sirona Capital plans to expand its property footprint in Fremantle beyond the $300 million Kings Square redevelopment and position itself to benefit from the long-awaited commercial rejuvenation of the port city.

It's understood the 30,000-square metre office component of the Kings Square venture has attracted strong interest from prospective government tenants, and Sirona managing director Matthew McNeilly said he believed new office accommodation would play a significant role in the "turnaround story" for the port city.

"Fremantle offers a lot of amenity, it's a turnaround story but it really just needs a tidy-up and some investment because there really hasn't been any investment since the America's Cup," he said.

"We believe what we are doing with Kings Square will be a catalyst for that turnaround story."

Sirona finalised a deal with the City of Fremantle in April to develop a suite of new civic facilities on the Kings Square site, as well as office accommodation and 12,500sqm of retail property.

If it can lock down an anchor tenant for the office component, Sirona could start construction as soon as 2014 ahead of a planned completion in 2016.

The group is keen to identify future office sites as well as apartment and hospitality opportunities in Fremantle, and is already running the ruler over a boutique hotel site on Pakenham Street through new venture Westbridge Property Group.

Westbridge formalises Sirona's long-standing relationship with property developer Luke Saraceni, who is focused on rebuilding his property empire after it was decimated by the fall-out from his involvement in the Raine Square development in the CBD.

Sirona was unwilling to discuss the finer details of the partnership except to say it was a joint venture that would make the most of Mr Saraceni's experience as a developer and Sirona's financial firepower.

Sirona no longer has an exclusive funding arrangement with US investment manager Mt Kellett Capital and its $7 billion private equity fund, but Mr McNeilly said the access and availability of debt for property projects had improved significantly during the past year.

"Most of the capital we have sourced for real estate projects has been local capital, family office-style investment, but where we have larger projects we have been able to tap into our global network of private equity," Mr McNeilly said.

"And what we have seen in the last 12 months is ... the banks are lending to real estate again and debt is what makes it (real estate) happen; it's not just an equity game, it requires the banks to play in the space."

Sirona has four projects through its Westbridge connection, including an industrial land parcel in Canning Vale, a 90-hectare rural holding north of Perth, a new hotel proposal for the Perth CBD and an office-apartment scheme for a Murray Street site abutting Shafto Lane.

Westbridge has put up two separate proposals for the Murray Street site, a straight office development and an alternative scheme, under which the property would support an apartment project.

The office proposal pits Westbridge against a number of competing office schemes mooted for the city and takes Mr Saraceni back to within blocks of the Raine Square project.

Georgiou Capital has put up the 21,000sqm Milligan Square proposal, which incorporates a 15-storey office tower with a boutique hotel on the corner of Milligan and Murray streets.

Sirona said it was still analysing which proposal would best suit the Murray Street site, with the decision ultimately depending on the strength of the office market as compared to demand for apartments.

A slowdown in mining investment has hit many of the city's mining services industries hard and brought a lot of project space on to the market in the first half of this calendar year.

In addition to this space, construction is about to start at several new office towers, including the four towers at Kings Square in the City Link and the second tower at Brookfield Place, all of which will add to the CBD's office supply and push up the vacancy rate.

He said local and international investor appetite for Australian projects remained high but global sentiment was one of the biggest liabilities for the group's business model.

"If global sentiment were to turn negative again that might have some impact on the availability of capital ... if there was some type of second round credit crisis that would see our banks reassess their position," Mr McNeilly said.

"There's no doubt these are more uncertain times than they were 12 months ago and unemployment will rise and we are adjusting our settings to think about how that will impact what we currently have on the go and what we will invest in the future.

"I think we will be a bit more cautious but there are very good opportunities in this city given the way it has grown and the way we think it will continue to grow and that's really just a population story."